The monthly release of the BLS jobs data includes the latest data on wage inflation. I thought this would be a good excuse to review the conventional mainstream economic “wisdom” on the relationship between interest rates and inflation, in this case, wage inflation.

The conventional wisdom, taught by the Fed and the high priests of economism, is that raising interest rates curbs inflation. This legendary myth applies to both consumer prices and wages.  Back in the old days (the 1970s) the Fed would raise interest rates to fight “wage and price inflation.” Prices meant consumer prices, and wages meant worker salaries.

We have talked in the past about how the government changed the definition of consumer prices to exclude housing inflation in 1982, substituting an abstraction called Owner’s Equivalent Rent (OER). That abstraction is a fraud purposely designed to understate CPI, because CPI growth was killing business and government with skyrocketing costs as inflation soared into double digits.  The government wanted to reduce the CPI inflation rate not only to reduce the Cost of Living increases in government benefits like social security. The Reagan Administration especially wanted to help out the Federal Government’s friends in big business.

Back in 1982 we had these nasty organizations called “labor unions.” Business people negotiated wage rates with those organizations, which represented vast pools of workers. That put workers on an equal footing with employers.  This equal footing gave workers market power which they don’t have today. Wage rates in labor contracts were usually tied to CPI. That led to a self reinforcing wage-price spiral.

Employers didn’t like that, and neither did Ronald Reagan. He fired the Professional Air Traffic Controllers in 1981 for demanding better working conditions and higher pay.  That sent a signal to big business that it was open season on unions.  It was the beginning of the end of collective bargaining in business. The playing field was no longer level. Wage inflation was never higher than it was when Reagan fired PATCO.  It was all downhill from there.

Economists and central bankers started the myth back then, or even earlier, that raising interest rates would choke off this wage price spiral, which by the late 1970s had led to near double digit inflation rates in both wages and CPI. Paul Volcker was appointed Fed chair specifically to stop that spiral.  In fact, rates had begun to increase late in 1977. Volcker was appointed in August 1979.

Oddly enough for those who believed the myth that raising interest rates stifles inflation, wages began to rise even faster about a year after Volcker pushed these draconian rate increases higher. And wage inflation continued to accelerate up until the point when the Fed STOPPED raising rates. The wage inflation rate only began to fall late in 1981, approximately concurrent with the Fed Funds rate beginning to decline.

Wage inflation continued to fall throughout the next 6 years. In all but one of those years, the Fed was cutting rates. In other words, wage inflation fell as rates fell. Economists attributed it to the “lag effect” of rate increases. Whenever actual experience doesn’t follow economic theory economists blame the “lag” in the effect of policy, rather than accept the obvious truth. In this case, the war on unions that drove their steady decline played a much more important role in the fall of wage inflation. 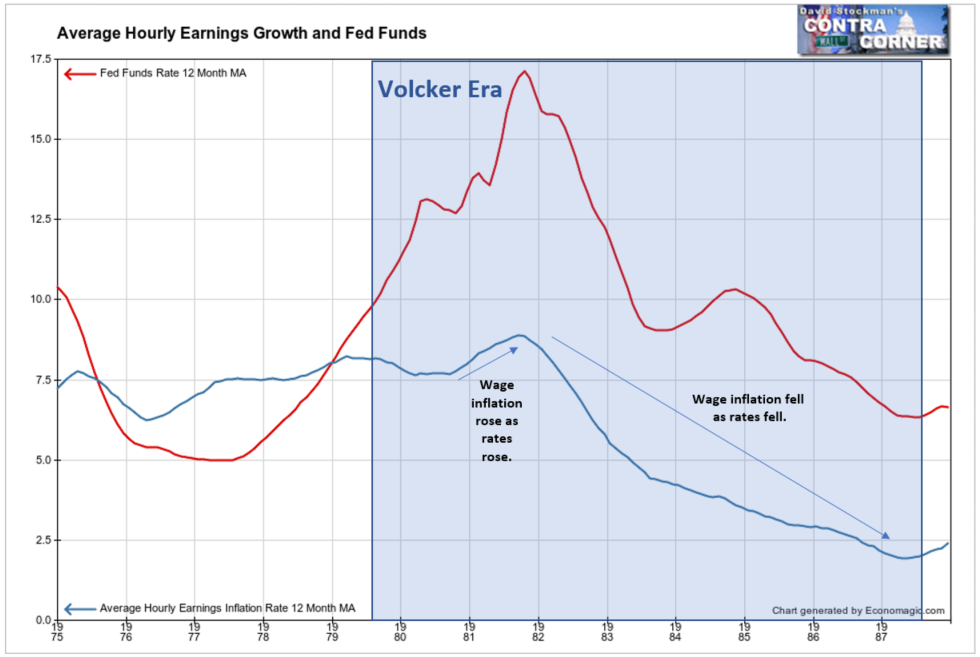 In the post Volcker period, the stock market crashed in October 1987, early in Greenspan’s term as Fed chair. What did the Maestro do in response to the crash? He RAISED RATES! But instead of inflation subsiding as rates rose, wage inflation accelerated! Wage inflation only slowed about a year and a half after Greenspan had begun cutting rates. Again we see clear evidence of direct correlation, as opposed to the expected inverse correlation between interest rates and wage inflation. 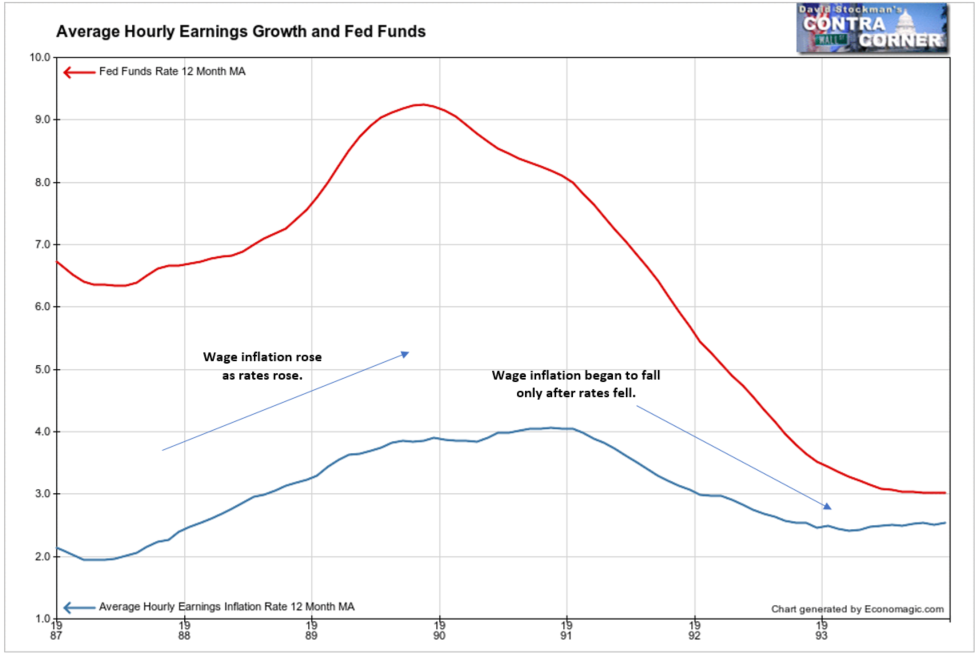 It wasn’t much different through the remainder of Greenspan’s term until 2005. Wage inflation fell when rates were falling. It only heated up when rates were rising. Again, the exact opposite of the preachings of the central bankers and the rest of the High Priests of Economism. They continued to refuse to believe the facts. Raising interest rates does not stifle inflation. It stimulates inflation. Businesses, workers and consumers believe the signal sent by the Fed raising interest rates. The message is that the economy is overheating and inflation will heat up with it. Everyone behaves accordingly.

The other side of that coin is that the mythology of Economism says that lowering interest rates will stimulate economic activity and inflation. Wages will rise, and everyone will be happy and spend, spend, spend, in a virtuous circle of spending, inflation, and growth. At least that was the theory of Ben Bernanke.

Ben Cardinal Bernanke ascended from the Fed College of Cardinals to the throne of the Papacy of US Economism in 2005. In 2008, Pope Ben declared, “Let there be ZIRP!”  And Thus, the Fed Funds rate began its descent toward zero, under the Fed’s new Zero Interest Rate Policy.

And the Primary Dealers and hedge funds saw that it was good.

Everybody else, not so much. For as the Fed Funds followed Pope Ben the Printer’s edict, falling to zero over a couple of years, widowed grandmothers saw their savings of a lifetime disappear as they were forced to spend their principle, rather than the living off the income they and their dear departed spouses had believed they could depend on.  Or they cut their spending, hoping to hold on to their nest egg. That cut in spending by millions of conservative savers led to slower economic growth.

Workers saw their earnings collapse, as ZIRP signaled to both management and workers that the economy was bad and would stay bad for the duration. Business people trusted that signal and withheld wage increases.

Individual workers, no longer empowered with union representation, were forced to accept the crumbs they were offered.  The Union Yes! ad campaign of the 1980s was long dead and buried.  There would be no wage inflation without representation. Wage growth followed interest rates lower through 2012.

The Fed announced and made official its 2% inflation target in 2012. Fed funds remained near zero and wage inflation continued to fall. Then in mid 2013 the Fed began to float trial balloons about ending QE. While interest rates stayed near zero, the labor market took note of the Fed talk and wage growth began to rise.

That continued as the Fed did taper QE, finally ending it at the end of 2014.

Not coincidentally, once the Fed announced a 2% inflation target, it became a floor for wage inflation. Wage inflation rose above 2% in mid 2013 and never fell materially below that level thereafter. Wage inflation is just one of several inflation measures that has been at or above 2% since soon after the Fed announced the target. The Fed’s focus on the most manipulated and suppressed measure of inflation, the core PCE, allowed most market participants to go on believing the fantasy that inflation is subdued. Meanwhile the June data shows that the 12 month average of wage increases is hovering right around 2.5%, after a steady rise from 2% in 2015. 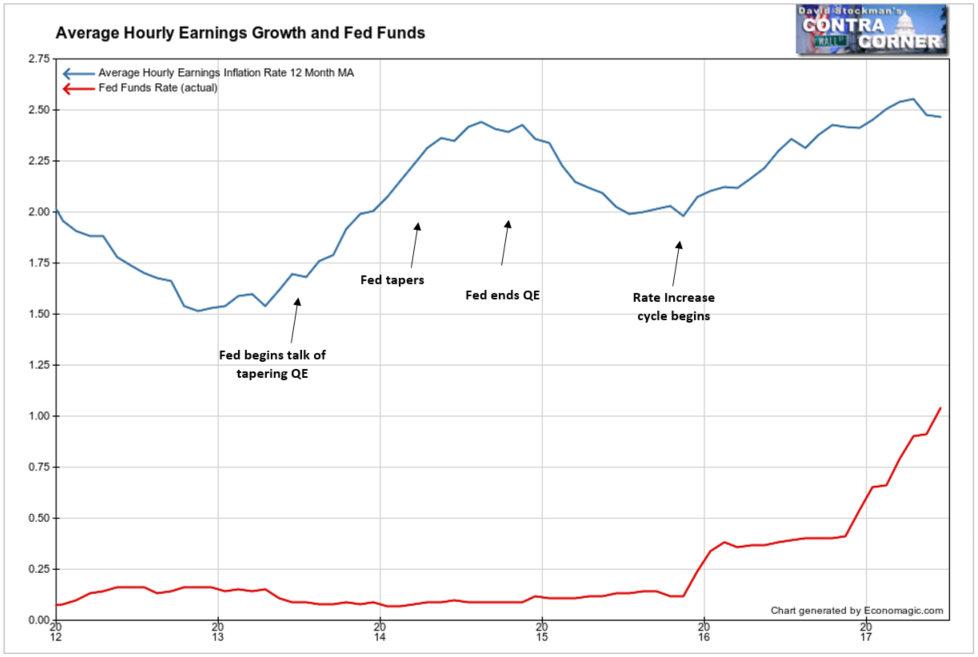 The conclusion to be drawn from the repeat of this pattern is this. The Fed will continue to chase its tail as it tightens policy. It will raise rates and tighten the balance sheet. Inflation rates, including wage inflation, will increase. They will increase because of the signal that rising rates send to all economic actors. That signal is that the Fed believes that economy is strengthening and that inflation will heat up. The Fed even says so in its official and semi-official pronouncements.  That message will reach business people, workers, and consumers. They will behave as if the signal is true, just as they have always done in the past. They will spend faster and economic conditions will in fact, grow tighter.

In so doing, the Fed, business, workers, and consumers will engage in a vicious spiral that constantly drives both inflation and interest rates higher until rates become so high that they finally choke off speculative behavior and stock prices fall hard. A big decline in stock prices will send a universal signal that business is bad. The Fed will end the tightening cycle. It will start to cut rates. Businesses will lay off workers, and workers will no longer be able to demand pay increases.

The age old cycle of bull and bear will start anew.

But first comes the bear as the Fed tightens and the economy and inflation overheat in response to the Fed’s signal that that is what it expects.