Interest Rates Have Already Risen, Except For Overnight Money

With the Fed on the verge of making a rate move, Wall Street and big media pundits have missed the fact that rates have already moved. Various types of 30 day commercial paper has risen almost 20 basis points since October and nearly 30 bp since July. 90 day paper has risen by 25-30 bp since October and 30-35 bp since July. Meanwhile overnight money, which is the one area that the Fed purports to control, has barely budged. 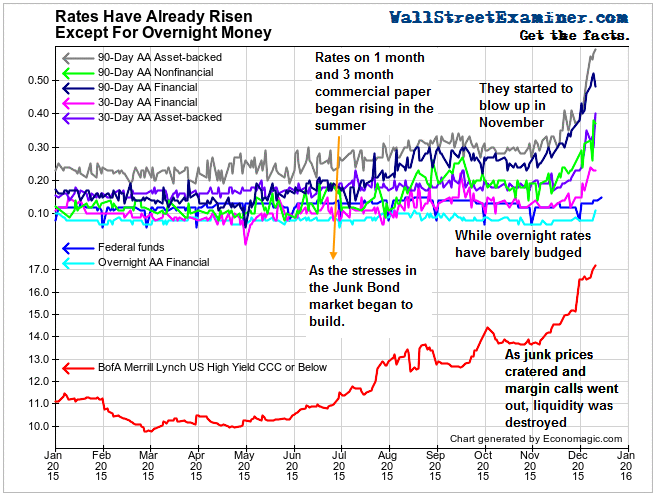 In effect the market has already tightened. Signs of a money crunch are showing up in these soaring money market rates in durations longer than overnight. I have addressed the idea that the Fed probably could not make a rate increase stick, and the lack of movement in overnight financial company commercial paper as well as Fed Funds supports that. But there are clear signs of turmoil even in maturities as short as 7 days, and more so at 30 and 90 days. Apparently the Fed may not even be able to prevent a spontaneous self generated market tightening from spiraling out of control.

The fear of even a minuscule, one-off rate hike has become a self fulfilling prophecy. Beginning in the second quarter, selling of leveraged instruments like commodities futures, leveraged emerging markets debt and equity bought on margin, and especially junk debt, began to cause liquidity to dry up. Margin calls started to go out, which extinguished deposits and caused distress in the leveraged carry trades. As the collapse in the junk market worsened, rates rose. Recently several hedge funds and mutual funds have collapsed as a result of the turmoil.

The US Treasury exacerbated the problem in November when it suddenly came to market with $310 billion in net new debt once the debt ceiling was lifted. The Treasury was forced out of the market by the debt ceiling, and it had actually paid down $140 billion in Treasury debt in September-October. 30 and 90 day rates actually fell about 10 bp during that window as the Treasury pumped cash back into the accounts of dealers and other holders of expiring T-bills that were not being rolled over. Those holders deployed this cash into other types of paper, pushing rates down during that window.

But as soon as the Treasury moved to claw back that cash, and then some, the shortage of T-bills turned into a glut. As the Treasury sold that $310 billion in new paper in November, it sucked that cash out of the market. That action, combined with the turmoil in commodities, emerging markets, and especially junk debt, caused short term interest rates to soar as prices of the collateral collapsed and calls for additional collateral went out.

So perhaps it really doesn’t matter what the Fed does. The markets are so addicted to ZIRP that the mere fear of rate increases has caused them to come unglued. As a result, liquidity available for carry trades has tightened and rates for short term money, where overnight money is not plentiful, or even available, have already surged. The Fed can’t do anything about that, but the turmoil may be enough to keep it from trying to move the Fed Funds rate higher. Either way, it will be “interesting.”

The post Interest Rates Have Already Risen, Except For Overnight Money was originally published at The Wall Street Examiner. Follow the money!