Introducing The New QE: Quantitative Expropriation, Thanks To NIRPitrage

This explication of quantitative expropriation is excerpted from the semiweekly examination of Fed balance sheet manipulation and banking system elevation, part of the Pro Trader Macroliquidity services.

While US bank loan and deposit growth continues to go bonkers at annual growth rates of more than 8% for loans and around 6% for deposits, loan and deposit growth in Europe are near zero. That’s in spite of the fact that Mario Draghi and his merry band of madmen central bankers have thrown everything but the kitchen sink at their system to try to get it to grow.

But here’s the thing. NIRPitrage is killing them. At the same time, it is boosting the US markets. In this report I do a little show and tell on the details of what is going on and how it works.

Unfortunately, Mario Draghi is such a raving, foaming-at-the-mouth madman, that he is likely to do even more of what is causing NIRPitrage to simultaneously strangle Europe slowly to death and send cascades of capital into the US, the Last Ponzi Game Standing.

Why does capital flow from Europe to the US as fast as Stupor Mario can print it? This is so simple, even a caveman would get it, but unfortunately, put 12 central bankers in a room and they lock the door to keep reality out. Capital flows to the US because Europe has negative interest rates (NIRP) and the US has positive interest rates. Big investors, speculators, businesses, and securities dealers all have the option of where to send and keep their money, and if Europe is stupid enough to tax them for keeping cash there, then by god, they’ll just move it somewhere else. They’ll move it to where it’s safe, and where they can still earn a positive return, however, minuscule. That dear friends, means the good old US of A, land of the free and home of the half point, which, by the way will be heading higher soon.

As crazy as I think the Fed is, they are beacons of sanity in the delusional world of central bankers. Insanity is relative, and in this case, that relative dose of sanity is probably just enough for the Fed to recognize that positive rates in the US help to keep our Ponzi growing as long as Europe and Japan are negative. And if the Fed raises rates, those flows to the US will grow even more. It’s not quite quantitative easing. It’s really more of a quantitative expropriation. The ECB and the BoJ do the quantitative easing, then the Fed pays just a little more for it, and the cash comes flowing across the sea in massive waves. The result is a combination of NIRPitrage and Quantitative Expropriation.

ECB data on bank deposits for the Eurozone shows total bank deposits rebounding in January, while remaining virtually rangebound for past the year. Money printing in the form of the ECB’s asset purchases should cause a euro for euro increase in deposits, but that has not occurred. That’s because a substantial portion of the ECB’s newly printed money flees the Eurozone altogether to avoid the NIRP tax. Total deposits are barely higher than the level reached when the ECB began outright QE in March 2015. Considering that the ECB has printed and pumped about €650 billion into the European banking system since then, it’s clear that that system has sprung a very large leak. 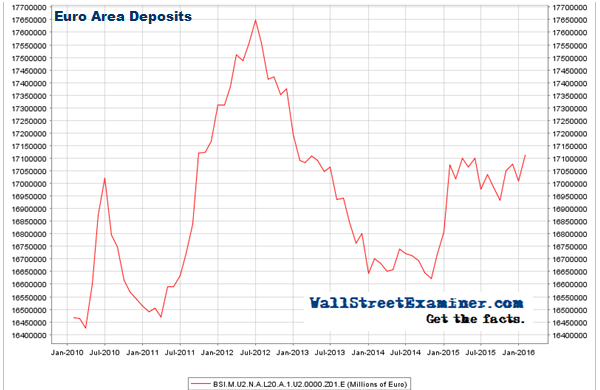 Where’s it going? I have constructed the chart below to illustrate what is happening. That chart shows the correlation between the ECB’s asset growth, and the size of its various deposit facilities–what economists call reserves–along with the correlation to total European bank deposits and the direction of US Treasury bond prices. 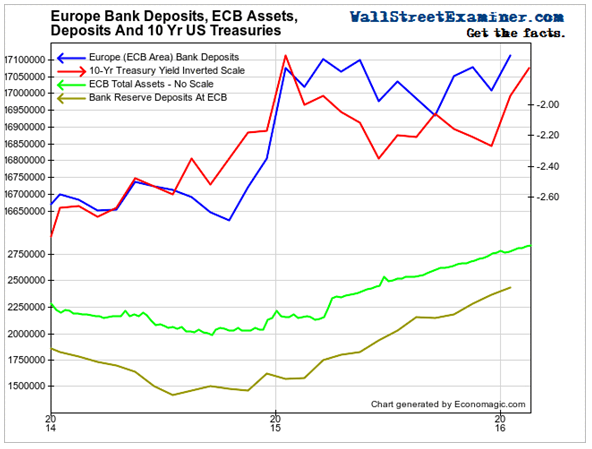 Note the correlation between European bank deposits and the direction of US Treasury note prices (yield inverse) at the top of the chart. We obviously know that Some European deposit holders have been buying Treasuries. I have shown charts similar to this in the past which depict this correlation over the long term. This chart shows what has happened since the ECB started NIRP in June 2014.

The lower half of the chart shows that as the ECB purchases assets (green line) there is a like increase in bank reserve deposits at the ECB. This is basic Accounting 101. The ECB buys the bonds from the banks by crediting their deposit accounts at the ECB with money it materializes by waving its magic money wand through the electronic ether.

Those reserve deposits which didn’t exist prior to that moment instantly become very real, and absolutely immutable. They can move around on the liability side of the ECB’s balance sheet, but they can’t leave it. Banks can get rid of their reserve deposits by buying assets from other banks, dealers, investors, businesses, or governments, but that only leaves another bank with the reserve deposit. Somebody will always be stuck paying the interest on the deposit. That makes those reserve deposits a hot potato that nobody wants, but nobody can escape as cash circulates through the banking system. Gone today, here tomorrow, oops.

The problem for the bagholding banks is that when they try to pass on the negative interest rates to customers, those customers with international connections do the rational thing, because, unlike central bankers, they are not insane. Deposit holders find the best option for their cash outside the European banking system, and the deposit leaves that system for greener pastures, most often in the US. Those deposits move frequently via the purchase of US Treasury securities or even US stocks. When the depositor buys Treasuries or US stocks, his bank exchanges his Euro deposit for US dollars and transfers the US dollars into the US account of the seller of the Treasuries. That could be a dealer, another investor, or the US government itself. The Euro deposits are thus converted to dollars and become US bank deposits.

This is basic interest rate arbitrage, and NIRP exacerbates that to the nth degree. That’s how the ECB can pump 650 billion euros into the European banking system, and deposits in that system manage not to grow at all. Depositors aren’t stupid. They’re getting the hell out of Dodge. The only stupid ones are Mario Draghi and his fellow central banksters at the ECB and more recently the BoJ. This raving lunatic is singlehandedly keeping the US Ponzi Game markets rolling while doing absolutely nothing for Europe.

As insane US central bankers may be, I suspect that they are just lucid enough to understand the benefits of NIRPitrage to the US Ponzi. That’s why I doubt that we will ever see NIRP in the US, and why the Fed may just follow through on its threat to gradually raise the sham Fed Funds rate (n0body really trades Fed Funds). The bigger the gap between positive rates in the US and negative rates in Europe becomes, the more capital will be encouraged to flee Europe and float US bond prices higher.

As we’ve seen recently, and as I previously forecast, it has also been enough to foment intermittent rallies in US stocks. This ridiculous pattern can go on for a long, long time. While buy and hold is dead, these policies result in tremendous trading opportunities on both long and short sides of the market for those who are paying attention.

There are far more gory details to this sad tale. To see them all and profit from the facts, click here.

Subscribe to these reports weekly or monthly. Read them for 3 months risk free, with a full money back guarantee..