Is The Auto Loan Bubble Ready To Pop?

On Tuesday, it was announced that over seventeen million new vehicles were sold in 2015, the highest it’s ever been in United States history.

While the media claims that this record has been reached because of drastic improvements to the US economy, they are once again failing to account for the central factor: credit expansion.

When interest rates are kept artificially low, individuals are misled into spending more than they otherwise would. In hindsight, they discover that their judgment errors wreaked havoc on their financial well-being.

This is a lesson that the country should have learned from the Subprime Crisis of 2008. Excessive credit creation led too many individuals to buy homes, build homes, and invest in the housing industry. This surge in artificial demand temporarily spiked prices, resulting in over four million foreclosed homes and the killing of over nine million US jobs.

Instead of learning from the mistakes that sent shock waves throughout most of the planet, the Federal Reserve has continued with its expansionist policies. Since 2009, the money supply has increased by four trillion, while the federal funds rate has remained at or near zero percent. Consequently, the housing bubble has been replaced with several other bubbles, including one in the automotive industry.

Automotive companies have taken advantage of the cheap borrowing costs, increasing vehicle production by over 100 percent since 2009:

In order to generate more vehicle purchases, these companies have incentivized consumers with hot, hard-to-resist offers, similar to the infamous “liar loans” and “no-money down” loans of the 2008 recession. Dealerships have increased spending on sales incentives by 14 percent since last year alone, and the banners in their shops now proudly proclaim their acceptance of any and all loan applications — “No Credit. Bad Credit. All Credit. 100 Percent Approval.” As a result, auto loans have increased by nearly $80 billion since 2009, many of which have been given to individuals with far-from-stellar credit scores. Today, almost 20 percent of all auto loans are given to individuals with credit scores below 620: 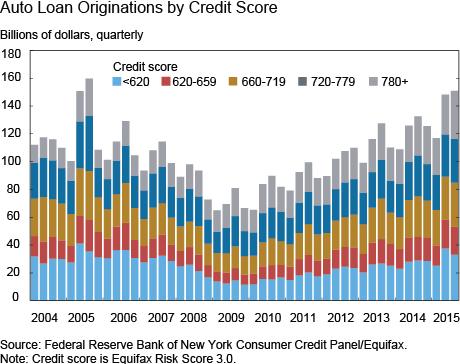 Not only are more auto loans being originated, but they are also increasing in duration. The average loan term is now sixty-seven months (that’s 5.58 years) for new cars and sixty-two (that’s 5.16 years) months for used cars. Both are record numbers.

Average transaction prices for new and used cars are also at their record highs. Used car prices have increased by nearly 25 percentsince 2009, while new car prices have increased by over 15 percent. Part of this has to do with the increasing demand for cars generated by the upsurge in auto loans. The main reason, however, is that consumers — taking advantage of the accessibility of cheap credit — are purchasing more expensive body styles. This follows the housing bubble trend, when the median size of a newly built single-family home rose to 2,272 square feet at the start of 2007.

We all know the end result of the Great Recession – prices soared, millions of houses were foreclosed, and unemployment surged. Demand for homes then plummeted, and home prices ultimately dropped by 20 percent each month.

The auto bubble has yet to burst, but its negative effects are already starting to gradually appear.

For one, delinquencies on car loans have increased by nearly 120 percent, from just over 1 percent in 2010 to 2.62 percent in 2014. Since cars rapidly depreciate in value, this number is projected to spike. By the time these six, seven, and eight year no-money down loans are due to be paid in full, many of these vehicles won’t be worth paying off anymore — maintenance and loan costs will start exceeding the value of the cars.

According to the Center for Responsible Lending, one in every six title-loan borrowers is already facing repossession fees. If defaults sharply increase in the coming years as projected, the market will become flooded with used cars, and their prices will, with near certainty, fall to a significant degree.

At a time when labor force participation is at its lowest level since 1977 — at a time when real wages are rising less than they have since at least the 1980s — it is imperative that the Federal Reserve stop misleading individuals into making irrational investments.The economy is simply too frail to continue weathering these endless business cycles. Economists, politicians, and the general populace need to start learning from their economic history so they can begin recognizing that favoring debt over thrift isn’t beneficial to the country’s financial well-being. Failure to do so will simply lead to more bubbles, more malinvestment, and more economic headaches in the years to come.

Source: Is the Auto Loan Bubble Ready to Pop?