It Didn’t Snow In San Jose: The Q1 Housing And GDP Rollover Is Not Due To Weather

Based on the data releases to date, Q1 GDP is trending at a tepid 1.5% growth rate, but do not be discouraged. Its all due to the weather!  So say the Wall Street economists who are now predicting a spring-summer boom for the fifth year running. Not withstanding the fact that they have been dead wrong for years now, somehow this time is different—–“escape velocity” is just around the corner.

There is a very simple reason why Wall Street’s so-called economists and strategists keep spotting a return to robust 3-4% GDP growth. Namely, its already priced into the stock market. Without many years of accelerating growth there is no possible case for “buying the dips”, yet the essential function of Wall Street economists is to peddle exactly that proposition.

It is already evident, however, that S&P 500 earnings will show virtually no year/year growth in Q1, and are trading in the range of 19X reported LTM profits. That means that the market multiple is at the top of its historic range and cannot possibly remain there unless there is a sharp acceleration of corporate sales growth—-and very soon.

After all, earnings growth can’t come out of still higher corporate profit margins. They are already way above their historic range. So unless GDP growth takes off, there is no possible route to the kind of vigorous earnings rebound required to justify 19X—-to say nothing of buying new positions on the shallow dips that come along every couple of months.

In truth, the US economy is freighted down by “peak debt” and is incapable of the kind of conventional credit-fueled rebound cycle that the Fed has orchestrated in the past. As should be evident by now, our national LBO is over. With $59 trillion of public and private credit market debt, the US leverage ratio stands at 3.5X national income—-massively above the 1.5X leverage ratio that was compatible with healthy, stable economic conditions before 1980.  The two extra turns of leverage laid on the economy over the past 35 years is exactly what blocks the “escape velocity” that Keynesian economists and Wall Street stock peddlers continuously espy just around the bend.

In fact, the evidence that the US economy is stuck in a 2% growth track—that is, spending growth is limited to the growth rate of production and income—is persuasive. Just look at the year/year growth rate of real final sales in the GDP accounts since the 2009 bottom.

This eliminates the seasonal maladjustments which confuse the quarter/quarter data, as well as the huge fluctuations in short-run stocking and de-stocking of inventory. Even then, the numbers are over-stated because the GDP deflator average of 1.5% over the last five years is just not credible. No one but an iPad addicted ascetic has had a cost of living gain that low since the financial crisis.

In any event, the year-over-year gain in real final sales was 1.9% in Q4 2013; 2.5% in Q4 2012; 1.8% in Q4 2011; and 2.0% in Q4 2010.  Economic growth hewed to the flat line— notwithstanding the massive money printing by the Fed—because after a three decade-long party, the American economy has way too much debt; has generated way too little real savings and investment in productive assets; and has accumulated wage and cost levels which are way too high to be competitive in today’s world economy.

Yet now we are in month 58 of this recovery cycle—compared to an average expansion of 53 months during the 10 post-war business cycles. That is, on a calendar basis this so-called recovery is already on borrowed time. But actually the true condition is much worse because now there are headwinds coming from nearly every direction on the economic compass.

On the international scene, Abenomics is failing catastrophically in Japan. The Chinese house of cards is becoming more shaky by the week.  The EM economies, which boomed on cheap capital inflows owing to financial repression by the DM central banks and as the supply base for the Chinese building spree, are heading for devastating financial crises and recessions.

And in Europe Draghi’s complete con job is self-evidently not sustainable. In fact, the still faltering EU economies outside of Germany are only one slip-of-the-tongue away from a drastic sell-off of their ridiculously mis-priced government bond markets, and therefore a renewed round of fiscal and financial crisis.

So the US economy can not export its way into “escape velocity”. Indeed, it actually stands squarely in harm’s way as the two-decade long central bank fueled global investment boom and financial bubble stumbles into the brutal correction and deflation that is just now getting underway.

Likewise, the domestic headwinds are already evident in the stunning roll-over in the housing market during the last several months. Now that the “flash” boom in housing prices is over owing to the hasty retreat of the big LBO funds from the short-lived “buy-to-rent” market, the underlying weakness of organic demand has become starkly evident.

Sales are now down significantly from year ago levels in major markets all across the country, and, as the following list makes clear, it was not the weather that did it. Instead, it was 130 basis points of interest rate normalization—-and that is just the beginning.

The salient fact of the matter is that the decades long era of “refi madness” is over. During the first quarter, gross mortgage originations totaled just $235 billion—the lowest rate in 14 years. Stated differently, the mortgage issuance run rate is now about $1 trillion on an annualized basis—-a level that represents just 30% of the normal volume since the mid-1990s.

And the stalled-out housing finance engine is not unique. Its just the leading edge illustration of what happens when credit-fueled rebounds no longer happen. Indeed, the crash of Q1 mortgage finance volumes shown below demonstrates that the very notion of “escape velocity”, or what in truth is really a euphemism for a credit fueled growth surge, is an obsolete relic of a bygone era.

March  sales volume remained the slowest since July 2012, when it was 4.59 million.

Major metros with decreasing sales volume from a year ago included:

In short, this time is different. The debt party is over. The era of financial retrenchment and living within our means has begun. It might even be that “selling the dip” is about to become the new normal.  Even this morning’s Wall Street Journal could not powder the pig. 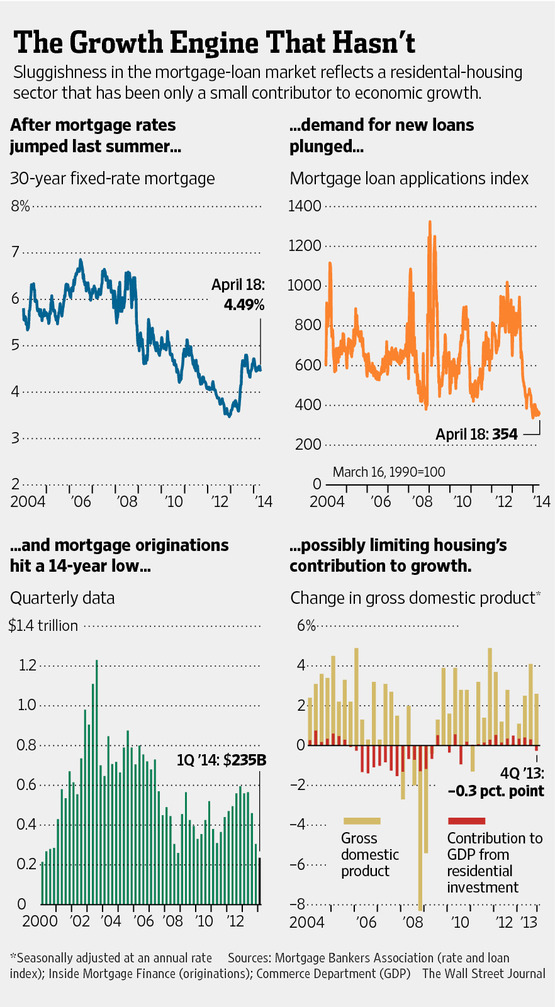