July’s Giddy Construction Number——In Real Terms Spending Is All The Way Back To 2002 Levels!

I noted some giddiness in my Twitter feed this morning after the record number for July construction spending hit the tape. So here’s my giddy reaction. 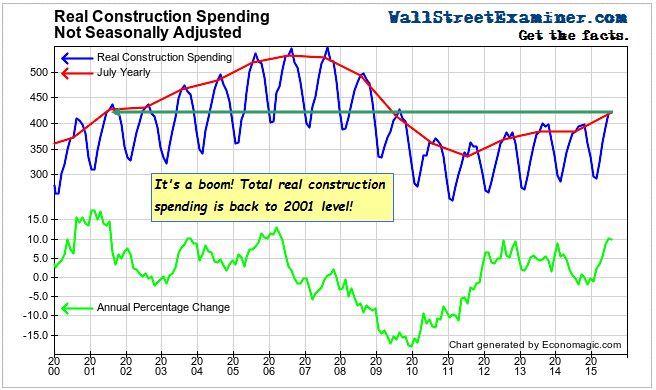 It’s a boom! It’s a breakout! To da moon! Oops. Adjusted for inflation, the number is a little less robust than the cheerleaders would have it, although yes, the trend is suddenly very strong, with 2 straight 10% year over year gains in June and July, coming off zero growth at the end of last year.

But wait, what’s this? The total nominal gain from June to July was $1.4 billion, a gain of just over 1.4%. Strong! But $829 million of that, 59% of the gain, was due to public spending on streets and highways. The gain in private construction was a more modest $690 million, or 1%. That’s still a good number, and year to year ex highway construction, it’s up 13%, a huge gain. So the trend is positive, but considering it’s only back to where it was 13-14 years ago, everything is relative.

The question in my mind is whether this represents developers rushing to get started before the interest cost on construction loans goes up. If that’s the case, this will be the climactic last speculative gasp before the trend rolls over, regardless of whether rates go up or not. It will be interesting to see what August and September numbers bring. I suspect that they’ll be a lot softer on the heels of this surge especially if the bear market in stocks digs in.

The post Giddy Reaction To July Construction Misses Key Fact appeared first on The Wall Street Examiner. Follow the money! See and understand the liquidity flowing from the Fed, Treasury, and other major central banks and primary dealers as they impact markets in the Wall Street Examiner Professional Edition.