By John Coumarianos at MarketWatch

The recent announcement that Third Avenue Focused Income Fund would undergo an orderly liquidation has investors on edge about junk bonds.

Fortunately, the Third Avenue fund, with its high-concentration in triple-C rated and unrated debt, was likely unique in the dangers it presented to investors.

But in the wake of this junk-bond debacle, the market is repricing even higher-quality yield-producing securities, and this is hurting income-oriented mutual funds that are mandated to deliver yield wherever they can find it — from bonds, stocks and other sources.

Problems not limited to junk bonds

The market is demanding more yield from even mildly risky assets, which entails reducing their price. If a security used to cost $100 and paid $2 (for a 2% yield), investors now may decide that such an instrument should yield 3%. In that case, they would drive the price down to $67.

Investors may reprice assets in this way for a number of reasons. For example, they may think U.S. Treasury yields are going up. That must send other securities’ yields up, and prices down, since yield-generating securities are judged against Treasurys.

Or investors may think U.S. Treasury yields will remain stable, but that other securities aren’t yielding enough above a U.S. Treasury to compensate investors for their risk. A newly discovered sensitivity to credit risk could send prices of high-yielding securities down and their yields up.

In other words, the “yield spread” (the difference in yield between a security and a comparable U.S. Treasury Bond) must widen.

And this is just what we’re seeing now in some, though not all, sectors offering higher-yielding securities. Besides junk bonds, these assets include investment-grade corporate bonds, municipal bonds, convertible bonds, preferred stocks, REITs, utilities, MLPs, and other groups of dividend-paying stocks.

Funds designed to deliver yield at all times, without the manager being able to hold meaningful amounts of cash, appear to be getting caught as they did in 2008.

A case in point is Franklin Income Fund FKINX, -0.47% This behemoth $80 billion fund often stumbles when yield spreads widen. For 2015, the fund lost 8.7% through December 22. And that’s despite paying a 5.5% yield over the trailing 12-month period, according to investment researcher Morningstar. 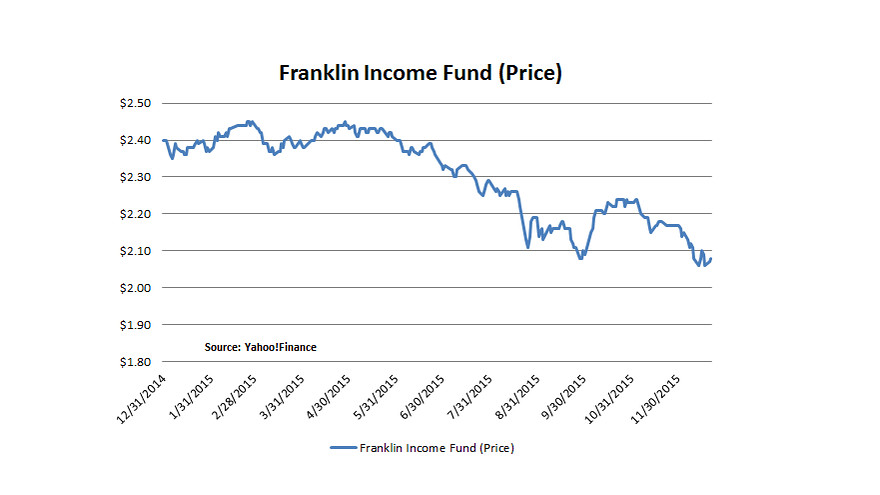 In 2008 — the last time yield spreads widened significantly — Franklin Income lost more than 30%. That was a worse showing than more than 90% of its peers in Morningstar’s conservative-allocation fund category and a poorer performance than the average balanced fund.

Investors, flummoxed by the Franklin fund’s volatility, have tended to sell after it has declined, and bought enthusiastically when it has run up.

The result is that the fund has posted a 10-year annualized return of 5.93% through November 30,, while Morningstar calculates its “investor return” (return received by the average investor in the fund, when return is adjusted for asset flows into and out of the fund) at 4.58%. For yield-starved investors, missing 1.35 percentage points of a 5.93% annualized total return is painful.

What’s in this fund? As of its most recent report, dated Sept. 30, around 50% of the portfolio was in stocks, 33% in bonds, and 16% in convertible preferreds.

On the stock side, Franklin Income’s 10% energy position has hurt it this year. In an interview with MarketWatch, lead fund manager Ed Perks acknowledged that top holdings Royal Dutch Shell RDS.A, +1.77% RDSA, +0.45%   and Chevron CVX, -1.84%   have been a drag on performance. But Perks thinks Chevron’s dividend is safe, and that the energy major’s ability to cut its capex spending isn’t appreciated.

Similarly, the fund’s stock portfolio has more than 12% exposure to materials. That’s almost three times the S&P 500 weighting. The S&P 500 Materials Index is down nearly 9% for the year.

Finally, the fund owns derivatives that might be called “synthetic preferred” securities. For example, the fund will enter into a contract (typically for one year) with a bank to give it exposure to a stock. The contract will also pay the fund more yield than owning the stock normally would. In exchange for the extra yield, the fund has its upside capped if the stock runs up beyond a prearranged limit. The fund also accepts the price downside if the stock declines.

Franklin Income takes on counterparty risk with these contracts, but the more important thing is for Perks and his team to get the stock picking right. So far this year they’ve struggled.

On the bond side, nearly 90% of the portfolio is in junk bonds. Although Perks doesn’t own the illiquid, distressed fare that sank Third Avenue, his portfolio, rated roughly B+ on average, has suffered from prices falling and yields rising.

Shareholders of Franklin Income can expect a prodigious yield at all times. But they should be aware that yield comes with meaningful volatility when spreads widen and when value oriented and dividend paying stocks aren’t in favor.