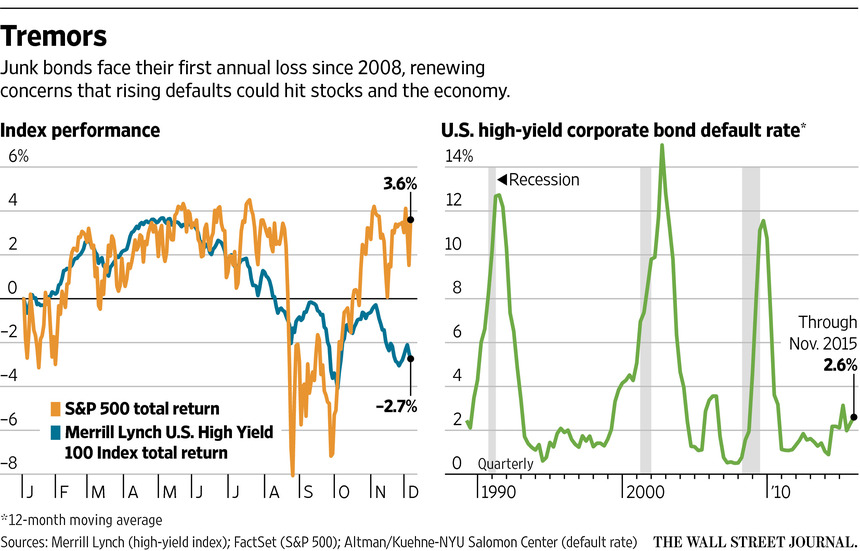 Junk bonds are headed for their first annual loss since the credit crisis, reflecting concerns among investors that a six-year U.S. economic expansion and accompanying stock-market boom are on borrowed time.

U.S. corporate high-yield bonds are down 2% this year, including interest payments, according to Barclays PLC data. Junk bonds have posted only four annual losses on a total-return basis since 1995.

The declines are worrying Wall Street because junk-market declines have a reputation for foreshadowing economic downturns. Junk bonds are lagging behind U.S. stocks following a debt selloff in the past month. The S&P 500 has returned 3.6% on the year, including dividends.

Adding to the worries are signs that the selling has spread beyond firms hit by the energy bust to encompass much of the lowest-rated debt across the market, potentially snarling some takeovers and making it difficult for all kinds of companies to borrow new funds.

In the fourth quarter of the year, there has been a “meaningful disconnect between equities and high yield,” said George Bory, head of credit strategy at Wells Fargo Securities. “It’s a warning sign about the potential challenges in the economy.”

High-yield bonds pay high interest rates, typically above 7%, because the heavily indebted companies that issue them are more likely to default. Investors flock to the debt in boom times when other securities pay minimal interest and often dump it just as quickly when they get nervous, making junk bonds a bellwether for risk appetite.

Defaults are rising after several years near historically low levels, as new bond sales stall and companies with below-investment-grade credit ratings struggle to refinance their debts.

The junk-bond default rate rose to 2.6% from 2.1% this year and will likely jump to 4.6% in 2016, breaching the 30-year average of 3.8% for the first time since 2009, said New York University Finance Professor Edward Altman, inventor of the most commonly used default-prediction formula.

Mounting defaults signal an end to the six-year bull run in credit fueled by the Federal Reserve’s long commitment to low interest rates, said Mr. Altman. He said downturns in the junk-bond market often presage stock-price declines and economic slowdowns. Some investors fear just such a reversal as the Fedprepares to raise interest rates this month for the first time since 2006.

“In most high-default periods we’ve seen in the past, the rise in default rates precedes a recession,” said Mr. Altman, who has been studying the subject for more than 50 years.

Oil and gas producers have struggled the most, and the pace of their defaults is accelerating.Swift Energy Co. missed a bond payment last week, while EXCO Resources Inc. andSandRidge Energy Inc. restructured bonds in November.

Investors who took losses in energy are now selling bonds of heavily indebted companies with weak performance in other sectors. Clothing retailer J. Crew Group Inc.’s bonds traded at 27 cents on the dollar last week, down 67% since June.

“When investors stop funding triple-C debt, it typically means bad things for the market, with a default peak within 20 months,” says Mr. Contopoulos, one of the few Wall Street analysts to predict the slide in high yield at the start of the year.

Two other indicators are also signaling a possible turning point. Corporate mergers and acquisitions—often funded with junk bonds—hit record levels this year, while the ratio of high-yield debt to corporate earnings is approaching an all-time high. Anxious debt markets and softening corporate earnings could limit further growth in those areas, traders said.

To be sure, the bottom hasn’t fallen out of the market. Higher-rated junk-bond issuers continue to find buyers for their bonds, and the retreat from risk so far is unfolding gradually. By contrast, junk bonds fell 26% in 2008.

What’s more, some measures show the U.S. economy to be on solid footing. Nonfarm payrolls increased a seasonally adjusted 211,000 in November, the Labor Department said Friday. The unemployment rate remained at 5%.

But analysts and traders warn that if an uneven economic expansion slows, a credit downturn could drag on for years in a replay of the junk bear market of 1999 to 2002. The scale of any market selloff would also be amplified: There are $1.3 trillion junk bonds outstanding as of Friday, up from $247 billion in 1998 and $709 billion in 2007, according to data from Bank of America.

While investors are still buying some bonds in growth industries, such as restaurants and gambling, price drops for out-of-favor bonds have been fast and furious this year. That’s in part because new regulations have sharply curtailed trading by Wall Street banks, which cushioned past selloffs by buying bonds.

Two years ago, for instance, Sprint Corp. sold $6.5 billion of high-yield bonds in a single day, a record at the time. But concerns have grown about the firm’s ability to pay its debts: When Moody’s Investors Service cut Sprint’s credit rating in September, the company’s bonds dropped 20% within two weeks.

Some see opportunity in the recent selloff. Steve Rocco, manager of Lord Abbett & Co.’s $4.2 billion high-yield bond fund, has eked out a flat return this year by avoiding energy companies and other firms he deemed at risk of losses like Sprint. He expects defaults to rise but says he sees bargains in the wreckage.

“What we’re spending time on now is the distressed bonds selling at 60 cents on the dollar,“ said Mr. Rocco. ”We see an opportunity there.”

Source: The Stock Market is Missing the Warning From Junk – Wall Street Journal