A firm founded by legendary vulture investor Martin Whitman is barring investor withdrawals while it liquidates its high-yield bond fund, an unusual move that highlights the severity of the monthslong junk-bond plunge that has swept Wall Street.

The decision by Third Avenue Management LLC means investors in the $789 million Third Avenue Focused Credit Fund may not receive all their money back for months, if not more.

Securities attorneys said Third Avenue’s decision to wind down the mutual fund without giving investors all their cash back could have significant repercussions for both the company and the mutual-fund industry, which for decades has thrived by promising to allow investors to take a long-term view of the markets while retaining the right to cash out shares at any time.

While hedge-funds have occasionally prevented investors from taking out their money, such a move is uncommon for a mutual fund.

The move is also a sign of how much the market for corporate debt is deteriorating following a long boom. Since the financial crisis, investors have sought higher-returning assets, and companies raised funds for business investment as well as for mergers, acquisitions and share buybacks. High-yield bond assets at U.S. mutual funds hit $305 billion in June 2014, according to Morningstar Inc. data, triple their level in 2009.

But investors have pulled money lately. Outflows in November were $3.3 billion, the most since June, according to Morningstar data. 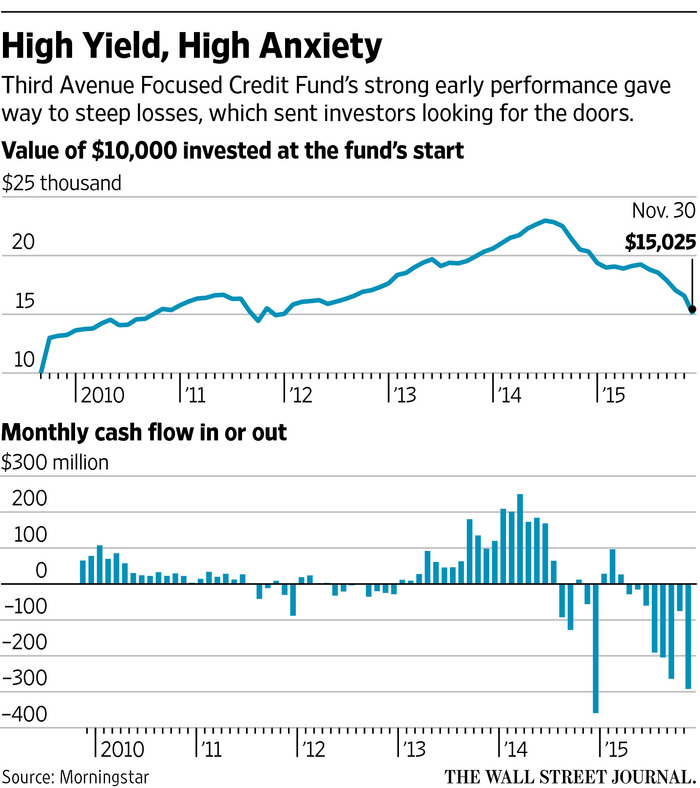 The yield spread between junk-rated debt and U.S. Treasurys narrowed to a multiyear low in mid-2014, reflecting investors’ confidence in companies’ business prospects. But spreads have since risen, reflecting lower prices, as the energy bust intensified questions about junk-rated companies’ ability to repay debts. All 30 of the largest high-yield bond funds tracked by Morningstar have lost money this year, reflecting price declines as investors shied away from risk.

“Investors have been dazzled that yields on bonds have climbed so high, even while default rates remained low,” said Martin Fridson, founder of Lehmann Livian Fridson Advisors and a longtime junk-bond analyst. “Currently, though, the ability to sell a large position is especially poor…. When that tension gets especially high, you can see something snap.”

The Securities and Exchange Commission has been warning mutual-fund managers who purchase illiquid securities—those that may be difficult to buy or sell at stated prices because of a lack of willing investors—to prepare better for potential redemptions and is drawing up new rules requiring such measures.

Third Avenue was founded in 1990 by Mr. Whitman, who built a name on Wall Street as a savvy investor in out-of-favor securities. The firm said it was extremely disappointed to stop withdrawals as it prepares to liquidate the fund, which was down 27% this year through Wednesday, according to Morningstar. Investors will get some money back on Dec. 16.

Third Avenue is the first mutual-fund to halt redemptions without obtaining an SEC order authorizing the move, according to a person familiar with the matter.

Obtaining “relief from the SEC is a time-consuming process, and time was not on our side,” he said.

“We are in communication with representatives of the fund and are currently monitoring the situation,” an SEC spokeswoman said.

The Federal Reserve is preparing to raise interest rates for the first time since 2006, a move with likely implications for the stock market, U.S. economy and the global merger-and-acquisition business.

Investors shifted large sums into U.S. bond funds on the heels of the financial crisis. Traders have long worried a reversal could intensify the declines in a market already grappling with trading difficulties.

In 2008, a number of hedge funds moved to bar investors from pulling money, arguing that withdrawals would force sales of illiquid investments when there were few buyers, though some clients argued the funds shouldn’t have placed so much money in investments at risk of becoming difficult to sell.

Also in 2008, a large money-market fund, the Reserve Primary Fund, said its net asset value fell below the $1-a-share level due to debt securities it held issued by Lehman Brothers Holdings Inc., the first time one of these conservative funds had a loss in 14 years.

Part of the reason the Third Avenue fund ran into deep problems, traders said, is because it purchased investments that have become much harder to trade and have been steadily losing value as investors fled energy and other kinds of riskier debt in recent months. That squeezed the fund as redemption requests rose sharply this year.

As the Third Avenue fund’s holdings began to decline, rival traders at hedge funds shorted, or bet against, some of the mutual fund’s holdings, wagering that Third Avenue would experience investor withdrawals and be forced to sell some of its holdings, according to the company and one trader who made this move.

Recently, Third Avenue executives became wary of how rivals were targeting the fund’s holdings and worried it wouldn’t have cash to meet investor redemptions, sparking the decision to bar withdrawals, Mr. Barse said.

Now, investors are focused on whether other funds may run into similar investor withdrawals and problems as the year-end approaches. Many investors move to exit losing funds and investments late in the year to generate losses to reduce capital gains taxes, traders said.

Third Avenue said it isn’t seeing unusual withdrawals in its other funds, which focus on stocks, not debt investments.

The Third Avenue Focused Credit Fund is one of the five high-yield funds that have suffered the heaviest net outflows year to date, according to Morningstar.

The fund was launched in 2009, at a time when the U.S. economy was beginning the long march back from crisis and investors were pouring funds into securities they believed were undervalued as a result of the financial panic.

“Our portfolio was well-known, it’s almost like we were targeted,” said Mr. Barse. He said the firm is doing everything possible to ensure the liquidation is done equitably for shareholders and notes that the firm’s executives and employees also are shareholders.

“I’m very disappointed in making the decision. It’s extremely painful, but now that we have time, we can improve our chances” of maximizing value for clients, he said.

Regulators broadly have downplayed investor concerns about investors’ difficulties of buying and selling bonds at stated prices. The worries are intense at a time when banks’ bond stockpiles are dwarfed by the volume of daily trading.

With those questions percolating in the market, the Federal Reserve Bank of New York has been monitoring conditions in the credit markets. “Some liquidity measures look as good as they have always been,” said a New York Fed official in an interview, but the official said they had “seen some deterioration.”