Keep You Eye On The MIT Billion Prices Index: Its Rising And it Arises From On-Line Trade, Not The BLS Puzzle Palace

From EPJ Daily Alert By Robert Wenzel At Economic Policy Journal
I believe that in many ways it is a much superior measure of overall price inflation in the economy than data put out by the Bureau of Labor Statistics. However, a very odd up and down move in the index caused me, in the ALERT, to question its reliability. I just didn’t buy that prices were jumping up and down as much as the Index was indicating. In the chart below, notice the up and down movement in the last quarter. 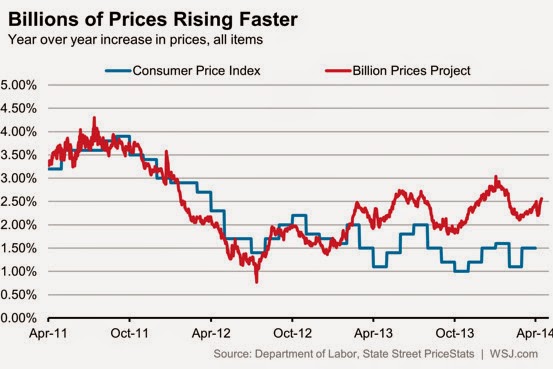 In the February 19 ALERT, I wrote:

The MIT Billion Prices Index is becoming very volatile. From a annualized inflation rate of over 4.0% just weeks ago to a current rate of 1.36%. This is an indication that something is distorting the number. I am still keeping an eye on the index, but its recent volatility suggests to me  that it is yet one more failed econometric data collection attempt.

(Note, in the above comment I am annualizing the  monthly MIT data, which is why the inflation rate is different from the rate in the above chart.)

But after the February dip the Index started to climb once again, I wrote on March 25:

Like a moth returning to the flame. I continue to monitor very closely the MIT Billion Prices Index (http://goo.gl/5tNoYA). As I have noted before, it has recently begun to display major volatility.  The latest read, as of yesterday, shows annual price inflation at 6.0%. Which, of course, if accurate suggests that overall price inflation is about to explode. I have tried to contact the designers of the index to find out what specific price jumps are behind the spike, but the best I  have gotten so far is, “I will get back to you.”

Beginning in 2008, a pair of economists at the Massachusetts Institute of Technology began tracking prices across the Internet to see if they could beat the Labor Department at its own game. Their task? Estimate the U.S. rate of inflation accurately before the government released its Consumer Price Index.

Dubbed the Billion Prices Project, that effort provided an amazingly close estimate of the CPI. Until quite recently, that is…Their Web-based measure, now known as the State Street PriceStats inflation series, has tracked the official CPI so closely that it is frequently cited as proof that the Labor Department’s measure is honest and can be independently verified….

[But a gap has developed of late with the BPP Index climbing far more rapidly that BLS indexes.] The gap could be explained by bad weather, and the superiority of online data in measuring commerce that increasingly takes place over computer screens, not cash registers.

To examine the divergence, Donohue looked at the monthly change in the two series, and quickly honed in on a split during the fourth quarter of 2013.

“It was really as you headed into November and December that the PriceStats series really ratcheted up while the official CPI had two months of going down,” she says. What else, she asks, happened in the last three months of 2013? “We had an overly harsh winter that started early. So people were buying through their online purchases more than their bricks-and-mortar purchases.”

If bad weather depressed foot traffic at stores, then retailers may have kept prices somewhat lower to keep the business coming in. Yet online, where purchases continue snow or shine, retailers had no need to offer discounts to bring in sales.

“The CPI is very much a bricks-and-mortar indicator and the PriceStats index can get a handle on demand even when weather conditions are tough,” she said. For the CPI, the Labor Department sends hundreds of price collectors into stores to record prices on the shelf. The PriceStats index, by contrast, scrapes the prices off websites.

What does Donohue think this means for future overall price inflation and the CPI data? That it will climb much higher. WSJ again:

[S]he has a bold prediction for the inflation outlook. Now that people aren’t hindered by weather, the CPI should converge toward the PriceStats Index, and not the other way around.

This is my view also, especially given that there are a number of supply factors that suggest tight supplies in especially the agricultural sector. Supply shortages can’t technically be labeled price inflation caused by money supply growth but price increases fueled by shortages can spark a decreased desire to hold cash balances and thus spark a more overall price inflation.