It is fortunate that Paul Krugman writes a column for New York Times readers who want the party line sans all the economist jargon and regression equations. So here is the plain English gospel straight from the Keynesian oracle: The US economy is actually a giant bathtub which is constantly springing leaks. Accordingly, the route to prosperity everywhere and always is for agencies of the state—especially its central banking branch—to pump “demand” back into the bathtub until its full to the brim. Simple.

campaign: nyt2014_sharetools_mkt_opinion_47K78 — 249335, creative: nyt2014_sharetools_mktg_opinion_47K78 — 375123, page: www.nytimes.com/yr/mo/day/opinion/paul-krugman-build-we-wont.html, targetedPage: www.nytimes.com/yr/mo/day/opinion, position: MiddleYou often find people talking about our economic difficulties as if they were complicated and mysterious, with no obvious solution. As the economist Dean Baker recently pointed out, nothing could be further from the truth. The basic story of what went wrong is, in fact, almost absurdly simple: We had an immense housing bubble, and, when the bubble burst, it left a huge hole in spending. Everything else is footnotes.

And the appropriate policy response was simple, too: Fill that hole in demand.

True enough, the housing and credit bubbles did burst. But that’s exactly where the rubber meets the road in the debate between Keynesians and Austrians. The latter see bubbles as an artificial expansion of economic activity owing to cheap credit and the malinvestments which flow from it.

When bubbles inevitably burst, therefore, the artificial bloat in investment, output, jobs and incomes is eliminated—or in the old fashioned phrase, liquidated.  Moreover, liquidation is the equivalent of purging a cancer; it removes a malignant growth, but does not reduce the true wealth of society or the sustainable living standard of the people.

The reason for this proposition is Say’s Law. That is, sustainable demand must originate in production; valid “spending” must be derived from the income earned in the process of supplying real goods and services. That includes spending that is financed by savers out of their own current incomes, and spending by transfer payment recipients that is financed by taxes on producers.

In that context, “money” is just an intermediary: it facilitates efficient exchanges between producers, but does not give rise to incremental “demand” that is independent of goods and services already delivered. Accordingly, when a credit bubble bursts there is no loss of honest, production-based aggregate demand. What disappears is artificial monetary demand that was originally enabled by the central bank and the financial system, not the productive main street economy.

Self-evidently, therefore, there was no “hole'” to fill after the housing and credit bubbles imploded in 2008. So Krugman’s injunction to “fill that hole” implies the opposite of Say’s Law. Namely, it embraces the Keynesian notion of what might be termed the “conservation of demand”. Accordingly, spending originating in fiat credit must always and everywhere be preserved by the fiscal and monetary arms of the state via new injections of artificial, non-production based “demand”.

It does not take too much imagination, however, to see where that leads—straight to helicopter money. During the seven years ending on the eve of the financial crisis in Q3 2008, total credit market debt soared from $28 trillion to $53 trillion—-or at a sizzling 9.2% annual rate.

By contrast, nominal GDP during the same period expanded at just 4.8% annually or at half the rate of credit growth. Accordingly, just during this short 7-year interval, the nation’s aggregate leverage ratio expanded from 2.7X GDP to 3.5X. In short, the booming “demand” of the Greenspan/Bernanke housing bubble was being borrowed from the future, not financed out of current production.

The unsustainability of nominal GDP growth financed by an ever increasing ratchet of the leverage ratio is evident from simple arithmetic. Just assume that the massive credit expansion of 2001-2008 was a good thing and that the trend needed to be preserved another 7-years, according to the Keynesian injunction on the conservation of demand. Moreover, even though credit expansion was rapidly loosing its efficacy during the last bubble as more debt bought less new GDP each year, assume that nominal GDP also managed to grow at 4.8% a year— compared to the actual rate of only 2.4% annually that has been recorded since 2008.

Needless to say, the credit-fueled trend of 2001-2008 could not be sustained without eventual economic and financial collapse. Stated differently, the rate of demand growth from the Greenspan/Bernanke bubble finance policies could not be conserved, and should not have been implemented in the first place.

Ironically, the housing bubble that Professor Krugman wants to preserve was actually his idea in the first place. During 2002 he famously instructed the Fed to replace the dotcom bubble with a housing bubble. Now he proposes that the “hole” left by the housing collapse should have been filled by an aggressive expansion of public investment, which is to say, a public works bubble.

In particular, the aftermath of the bursting bubble was (and still is) a very good time to invest in infrastructure. In prosperous times, public spending on roads, bridges and so on competes with the private sector for resources. Since 2008, however, our economy has been awash in unemployed workers (especially construction workers) and capital with no place to go (which is why government borrowing costs are at historic lows). Putting those idle resources to work building useful stuff should have been a no-brainer.

But what actually happened was exactly the opposite: an unprecedented plunge in infrastructure spending. Adjusted for inflation and population growth, public expenditures on construction have fallen more than 20 percent since early 2008. In policy terms, this represents an almost surreally awful wrong turn; we’ve managed to weaken the economy in the short run even as we undermine its prospects for the long run. Well played!

Here is the part that Professor Krugman didn’t mention. We already had a public works bubble last time around! Public construction spending grew at a 10% annual rate in the period up to the 2008 crash.  The decline he laments since then is modest, and still reflects a 2% real growth rate since the 1990s. Filling the “hole” with a continuation of the pre-2008 public works bubble, therefore, would result in the same kind of malinvestments and waste that was generated by the housing bubble he recommended last time around.

Here is the same data in constant dollars. Given the pork barrel nature of public works spending, it is completely unlikely that the public works bubble recommended by Professor Krugman would actually add to national wealth and living standard.  But it would fill up the Keynesian bathtub, and that is, apparently, exactly what Krugman seeks to accomplish. 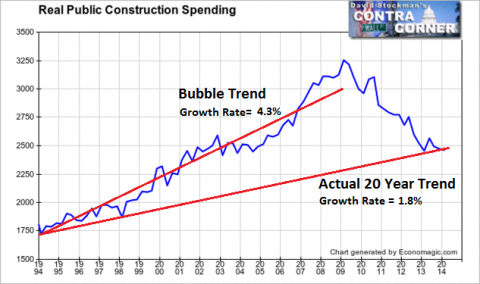