By TAKASHI NAKAMICHI And TATSUO ITO at The Wall Street Journal 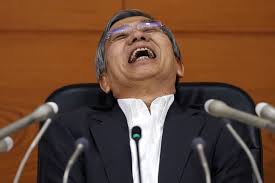 “At this moment, we don’t see any indication that the expectations in asset markets or of financial institutions are growing unduly or are excessively bullish,” Mr. Kuroda said.

The value of the first section of the Tokyo Stock Exchange, comprising about 1,900 of Japan’s biggest companies, hit ¥591.3 trillion ($4.9 trillion) at the market close before the governor’s comments. The figure exceeded the previous record of ¥590.9 trillion in December 1989 when Japan’s economy was at the peak of a major stock and land price bubble. The bubble burst violently in the early 1990s, sparking a long slowdown that later threw the economy into more than a decade and a half of deflation.

Speaking at a news conference after the central bank’s latest policy meeting, at which the BOJ kept its policy on hold, Mr. Kuroda said the rallying stock market was a reflection of record-high corporate earnings and the prospect of further increases in profits in the year ending March.

Mr. Kuroda also offered a more upbeat view on economic conditions, clarifying that the bank’s slightly reworded assessment of the economy, following growth figures showing a 2.4% expansion in the first quarter, amounted to a “half- or one-step forward.”

The governor’s remarks suggest he is determined to stick with the bank’s current asset purchases amounting to ¥80 trillion a year, equivalent in size to 16% of Japan’s economy, with no reductions or additions on the immediate horizon.

His stance sets him apart from Federal Reserve Chairwoman Janet Yellen, who caused a stir earlier this month by describing U.S. equity-market valuations as “quite high.” That remark gave some stock investors pause for thought.

But the BOJ has also been helping support stock prices. In addition to buying nearly all newly issued Japanese government bonds on the market, the BOJ has been purchasing exchange-traded equity funds at an annual pace of ¥3 trillion since October.

Stock investment by the bank and other government-affiliated organizations, including Japan’s $1.1-trillion government pension fund, has put such a strong floor under stock prices that investors refer to them as the “five whales” in the pond.

The asset purchases are aimed at stimulating borrowing and guiding households’ huge savings into risk assets so that the economy will strengthen and the inflation rate will reach the bank’s 2% target sometime next year.

But sharp stock-price gains over recent months have become one of the factors driving a wedge between the nine members of the BOJ’s policy board. Some board members have grown worried that low borrowing costs and surging share prices could sow the seeds of another bubble, though the majority led by Mr. Kuroda has spurned such concerns as overblown.

The differences in their views over the possible drawbacks of the easing measures led to a rare 5-4 vote last October in which Mr. Kuroda scraped through additional easing steps.

Board member Takahide Kiuchi, one of the dissenters on the board, proposed recently to nearly halve the asset-buying program to ¥45 trillion, partly by reducing the ETF purchases to ¥1 trillion. His proposal has been voted down at each subsequent meeting.