One month after Goldman strategists downgraded equities to neutral on growth and valuation concerns, the firm has turned up the heat on the bearish case with a report by Christian Mueller-Glissmann in which he says that equity drawdown risk “appears elevated” with S&P 500 trading near record high, valuations stretched, lackluster economic growth and yield investors being “forced up the risk curve to equities.”

As Goldman notes, “one large drawdown can quickly erase returns that were accumulated over several years.” It adds that “since the 1950smost equity markets had several large drawdowns of more than 20%, which have taken several years to recover from. For example in the 1970s the FTSE All-Share had an 80% drawdown in real terms and the DAX declined 69% during the Tech Bubble. One of the largest equity drawdowns across markets was during the GFC, when most global equity markets lost around half their value. And not to forget, the TOPIX has still not recovered from the large drawdowns of the late1980s/early 1990s.”

The firm also points out that large drawdowns are not only relatively frequent, but becoming more global in nature.

Elevated equity valuations tend to increase the risk of drawdowns for the simple reason that there is less of a valuation cushion to absorb unanticipated negative events. And while high equity valuations alone are not a reason for drawdown, particularly if they reflect stable macro conditions and if volatility is low and remains anchored, we believe that high valuations make equities more vulnerable. Exhibit 4 shows that ahead of the largest S&P 500 drawdowns, equity valuations have usually been elevated and sharply contracted during a correction – there is a somewhat positive relationship between valuations and the size of drawdowns. 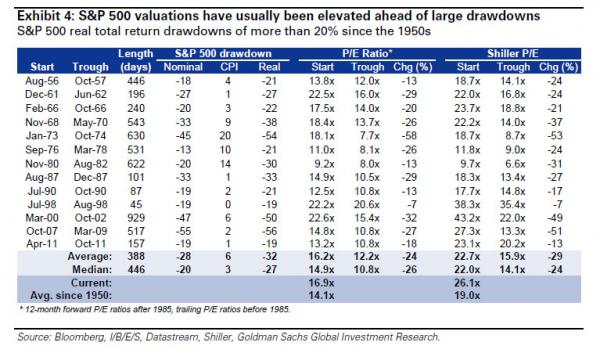 Goldman also explains that it is now harder for equity investors to diversify to avoid drawdown pain as correlations rise with international equities, low yields makes bonds “less effective” as a hedge, while commodities experience high volatility. But perhaps most interesting is Goldman’s discussion on where we stand currently in the equity cycle: according to Goldman the “growth” phase is behind us, we are now in the “optimism” phase, and it is only a matter of time before “despair” sets in. To wit:

A typical equity cycle often ends in ‘Despair’ with a drawdown…

Large equity drawdowns often mark the end of an equity cycle and tend to coincide with a recession or financial market/geopolitical shock or a combination, which tend to result in a sharp equity correction driven by a decline in both earnings and valuations (the ‘Despair’- phase). The subsequent equity recovery can be divided into 3 phases: (1) ‘Hope’, which is a strong recovery following ‘Despair’ and mostly driven by valuations increasing in anticipation of growth picking up, (2) ‘Growth’, which is usually a longer period characterised by lower volatility where earnings growth takes over as a driver of returns and valuations tend to be flat or decrease and (3) ‘Optimism’, during which the market continues rising despite a flattening earnings trajectory and valuation expansion again becomes the main driver of equity returns. In the ‘Optimism’-phase, as near-term fundamentals show a less clear direction, investors often extend their duration and extrapolate growth trends (e.g. during the Tech Bubble). As a result equities can be driven increasingly by LT expectations and after a strong period of growth valuations often get expensive, setting equities up for the next ‘Despair’-phase.

…but usually you have to have ‘Optimism’ first

The US has followed a relatively ‘typical’ equity cycle post the GFC. After a sharp correction driven by a decline in both earnings and P/E ratios in 2008 (‘Despair’), from March 2009 US equities recovered sharply, mainly driven by P/E ratios, in anticipation of earnings growth (‘Hope’). In 2010 it entered the ‘Growth’-phase, which tends to last longer and where equities increase mainly driven by earnings growth. But in this cycle S&P 500 P/E ratios expanded already during the ‘Growth’-phase from mid-July 2012, as a function of easy monetary policy globally and strong share buybacks. And since 4Q14 valuations have been the key driver of returns due to little earnings growth – as a result the US likely entered the ‘Optimism’ phase. It might be too early to say we already moved out of the ‘Growth’-phase since earnings growth has slowed in large part due to sharp declines in commodity prices since mid-2014, however, with margins at peak levels prospects for a material acceleration of earnings growth appear limited from here. 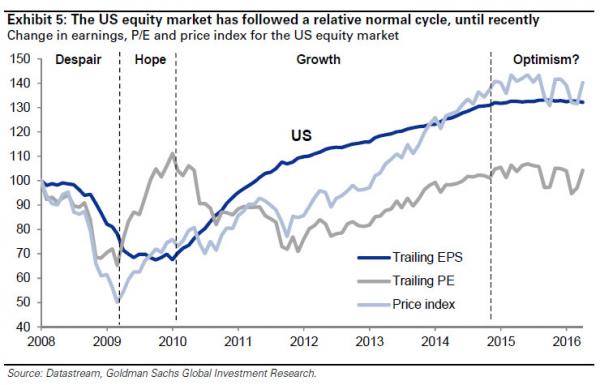 Another reason is the lack of optimism, which would normally occur during this phase of the equity cycle. During the ‘irrational exuberance’ period in the late 1990s, investors extrapolated strong earnings growth driving inflated equity valuations. Much in contrast to the Tech Bubble, investors are currently relatively pessimistic on growth prospects following several years of disappointment. As a result there has been a growing disconnect between the Shiller P/E and consensus long-term US earnings growth expectations – despite falling long-term growth expectations valuations have been stable.

We think the market has extrapolated the view of low rates into the future. Declining bond yields and the ensuing search for yield that has moved to equities have likely supported equity valuations. Assuming long-run average levels of growth the equity risk premium still appears high. As a result of their attractiveness relative to bonds, equities have stabilised in drawdowns since 2014 and ‘buying the dip’ has worked well.

And we have the central banks to thank for that, the same central banks whose “macroprudential” policies are happily inflatin the biggest asset bubble in history thanks to over $10 trillion in bonds with negative yields and rising at an exponential rate. Goldman continues:

However, if secular stagnation is increasingly priced by the market, equities might suffer as growth expectations built into valuations would have to fall – if the market reduces its long-term growth expectations the equity risk premium could be much lower, closer to levels from 2007 . Similarly, if bond yields normalise faster than market expectations, this should also weigh on valuations. Changes in the growth/rates mix (how much do rates increase relative to growth?) will be key for equity performance from here. As a result equities appear vulnerable to both ‘growth shocks’ (e.g. secular stagnation repricing, US recession or another China slowdown/RMB devaluation) and ‘rate shocks’ (e.g. Fed rate hike cycle too steep or other central bank disappointments). In addition there could be financial market and geopolitical shocks that further tighten financial conditions, e.g. Brexit, US presidential elections etc.

Ok, so a big drop is coming. How should one protect from this? As it turns out there is no simple answer, for one thing due to increased cross-asset correlation…

Large equity drawdowns are difficult to diversify. International diversification is increasingly difficult with higher correlations among regional equity markets, in particular during drawdowns. Diversification across assets can also be difficult with few consistent ‘hedges’ for equities. Commodities have helped in high inflation periods like the 1970s but have been a key source of risk recently with large oil price declines. Since the late 1990s bonds were good hedges with consistently negative equity/bond correlations, but recent results are mixed.

… and for another, because there are no longer any safe assets and good hedges:

With bond yields close to all-time lows and a large proportion of fixed income offering negative yields, ‘safe assets’ and ‘hedges’ for equities are more scarce. Real bond yields are low despite the start of a Fed rate hike cycle and bonds discount too little inflation, in our view. As a result they are also a source of risk. Gold can provide a hedge, but only in currencies with anchored real yields such as Euro and Yen. While Euro and Yen trade as ‘risk-off’ currencies we do not feel they are ‘safe havens’ and could devalue due to central bank divergence. Although we might be near the end of a once in a decade shift in the  commodity supply cycle, the weak global recovery might delay commodities being a good diversifier.

So here is Goldman’s best answer for strategies on how to manage the equity drawdown risk.

All of which is great… then again we can’t help but be concerned that the last time Goldman warned about a big drop in the market a month ago, precisely the opposite happened. Will Goldman finally get this one right, or did the firm just say the magic words for the next leg higher in stocks?

Which is a risk considering the current near record high valuations: