Last Pillar Standing: They Are Taking Out The Generals

The relatively few leaders (aka, “generals”) that had been propping up the indexes are being systematically taken out.

“The way we see it is that the 6-year bull market is running out of steam, the steam being the number of stocks contributing to its advance. This occurs at the end of cyclical bull markets, ala 1999 and 2007. Once the relatively few stocks that are still propping up the market roll over, there is no foundation of support left to prevent a significant decline. This isn’t doom and gloom propaganda. It’s just part of the market cycle and should be something to monitor closely as we enter 2016.” – Conclusion from our final 2015 post (and perhaps a dozen other posts).

The point of our statement above – and all of the warnings we issued regarding the deterioration of the market’s internals over the past year – was that eventually the few stocks that were propping up the major indexes were going to collapse under the weight of that burden. And at that point, there will be no foundation left across the broad market to continue to buoy the averages. Well, since the start of the year, and in particular over the past week, that inevitable reckoning has been unfolding. Those few leaders left standing at the end of 2016, aka the “generals”, have finally succumbed to the selling pressure that preceded them in the rest of the market.

This includes one of the last men standing: the internet sector. The unraveling of the internet stocks is a relatively recent development – and a swift one at that. This is what happens when there are very few areas attracting almost all of the money flow. Once that avenue too is shut off, the reversal can be powerful as all of the inflows attempt to exit at once. Such has been the case with the internet sector. Just 4 days ago, we posted an chart intraday of the Dow Jones U.S. Internet Index, noting the fact that the index was hitting an all-time high. Well, the index gave up its gains of early that day and has been plunging ever since as the selling has finally reached this sector as well. 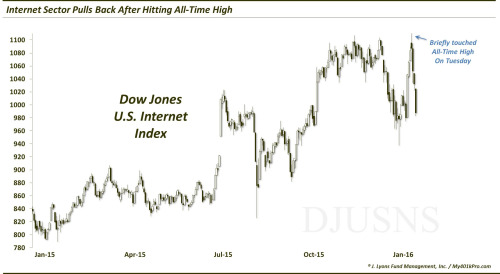 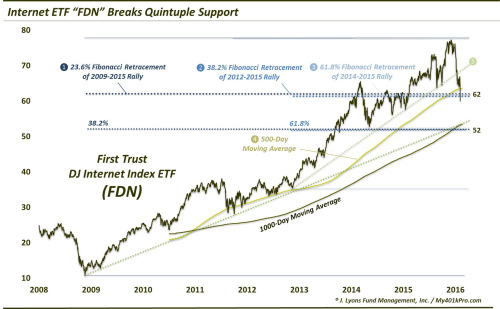 For now, the evidence is pretty clear. We have been offering warning after warning regarding the deteriorating breadth trend and how it was leading to vulnerability to a serious decline in the stock market. The major averages could only resist the selling pressure for so long on the backs of the mega-cap generals. Eventually, the generals would be taken out as well. They are now being taken out.