For those 17-year-old hedge fund managers used to BTFD on hopes corporate buybacks will “have their back” and provide the bid on which momentum-chasing HFT algos will piggyback, we have some bad news and some worse news.

The bad news is that we are entering yet another quiet period for buybacks. This means that for the next 45 days, the biggest – and supposedly only – buyer of stocks will be mostly out of the market, and bank buyback desks will not be able to provide much needed support during distressed (read: more sellers than buyers) times.

The worse news is that even without the buyback blackout period, following months of surging stock repurchasing activity by corporate treasurers… 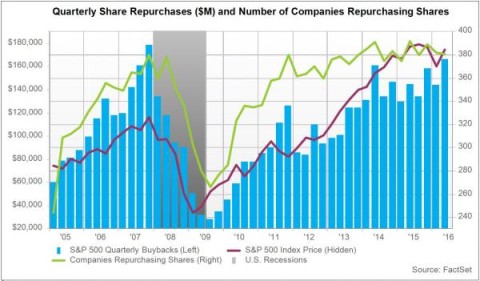 … buybacks have now ground to a virtual halt.

According to TrimTabs, stock buyback announcements by U.S. companies have fallen sharply, sending a longer-term negative signal for U.S. equities.

“Corporate America announced $2.8 trillion in stock buybacks in the past five years, and these buybacks have provided a key source of fuel for the bull market,” said David Santschi, chief executive officer of TrimTabs.  “Corporate actions this year suggest this support is going to diminish.”

“Even if some of the too-big-to-fails roll out buybacks after the release of the second part of the Fed’s stress test results, this month’s volume is likely to be among the lowest in the past three years,” noted Santschi.

TrimTabs also explained that stock buyback announcements by U.S. companies have totaled $291.7 billion this year, which is 32% lower than the $432.0 billion in the same period last year.

It is unclear if the dramatic slowdown is due to a shift in corporate strategy, due to a desire by the C-suite to stockpile cash, or simply because creditors are no longer willing to fund bonds whose “use of proceeds” is to buyback stock, no matter how high the yield.

In any case, the sudden disappearance of this cost-indiscriminate, and biggest by far, stock buyer in the market will be certain to have a substantial impact on risk pricing in the coming weeks and months; just in case the market didn’t have enough things to worry about…

Source: Some Bad And Some Worse News For Stock Buybacks