We keep seeing reports that economic growth is breaking out in Europe.  Wall Street in recent months has been touting “undervalued” European equities. Undervalued compared to what? The hysterical valuations in the US?

None of this claptrap squares with the ECB’s monthly data on bank balance sheets. From that perspective, the European economy remains dead in the water.

Meanwhile, European banks are running a scam so that they can collect bonus interest from the ECB. We’ll look at that below.

Total assets in European banks fell by 0.4% in May after a gain of 0.5% in April. Bank assets in Europe remain in the same range they have been in since December 2014. Bank assets remain down by 9.6% since mid  2012 and down 2.9% from a peak in early 2015, after the first TLTRO operation. The second big TLTRO operation in March had negligible effect.  There’s no sign of life, no sign of any outbreak of  bank lending, maybe because there’s no demand. Banks and investors continue to move cash assets out of the continent as fast as the ECB prints it. 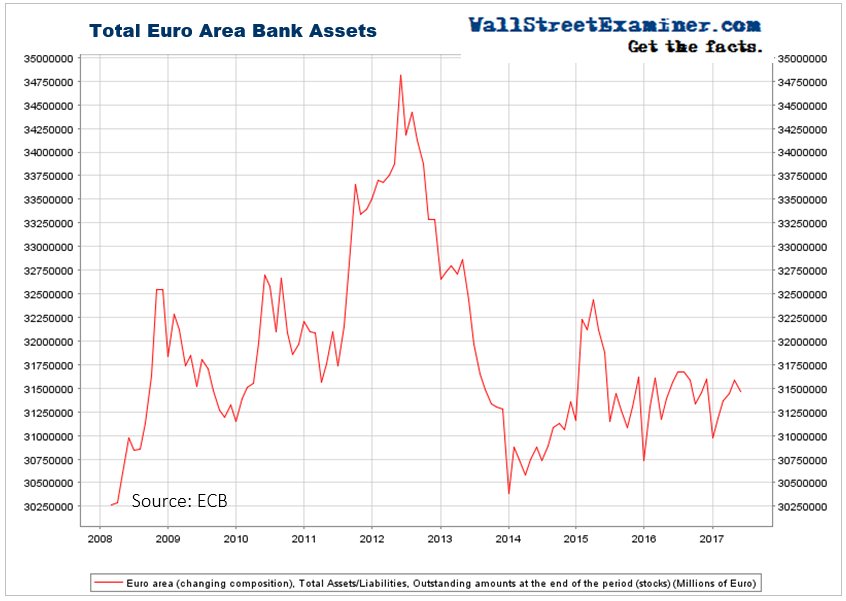 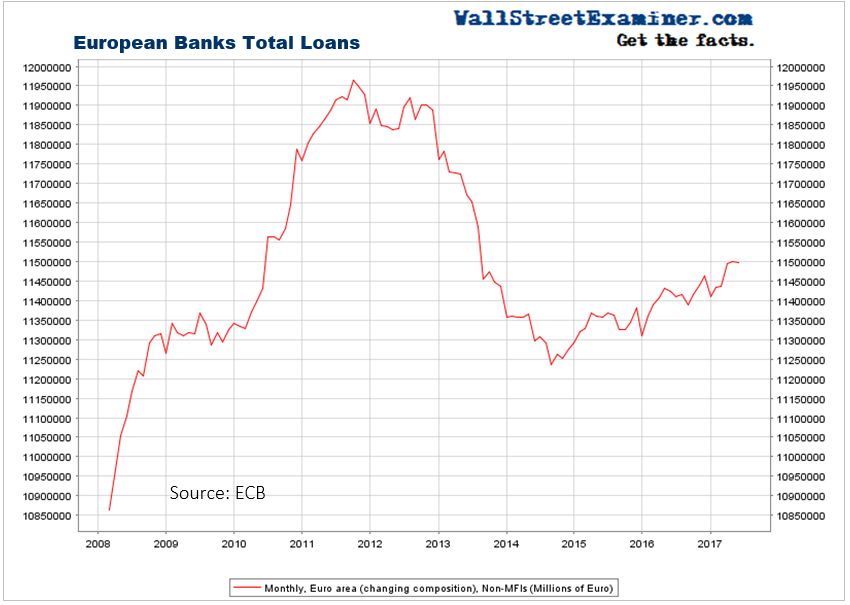 Total bank loans rose by 0.02% in May after a gain of 0.02% in April. Yep, they were the same. The annual growth rate was a rip roaring 2.5%.  These two months of zero growth followed the ECB’s big TLTRO program in March that was supposed to stimulate lending. There was a little pop in March as the banks put out sham loans so that they could collect their reward from the ECB. Then nothing.

What gains that have  occurred in Europe have been entirely in household borrowing. Household debt to banks rose 0.2% in May, the same advance as in April. Annual growth was 2.5%.  The annual growth rate was +2.2% a year ago. It’s weak growth, indicating that few Europeans want to borrow regardless of how low rates are. 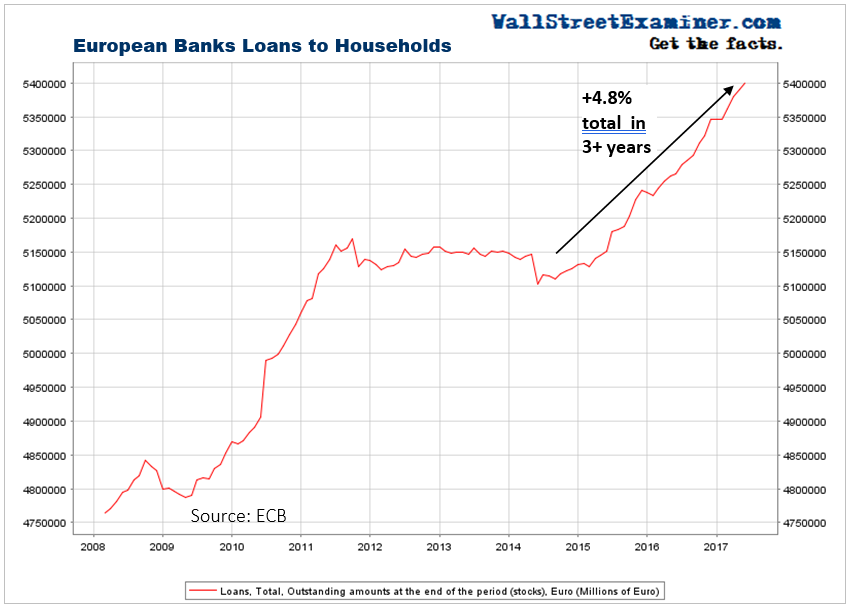 Household revolving credit rose 0.5% in May after falling 1.8% in April. It is now down 5.5% on the year and down 14.7% since NIRP started. QE and NIRP have not inspired ordinary Europeans to increase their credit card debt. 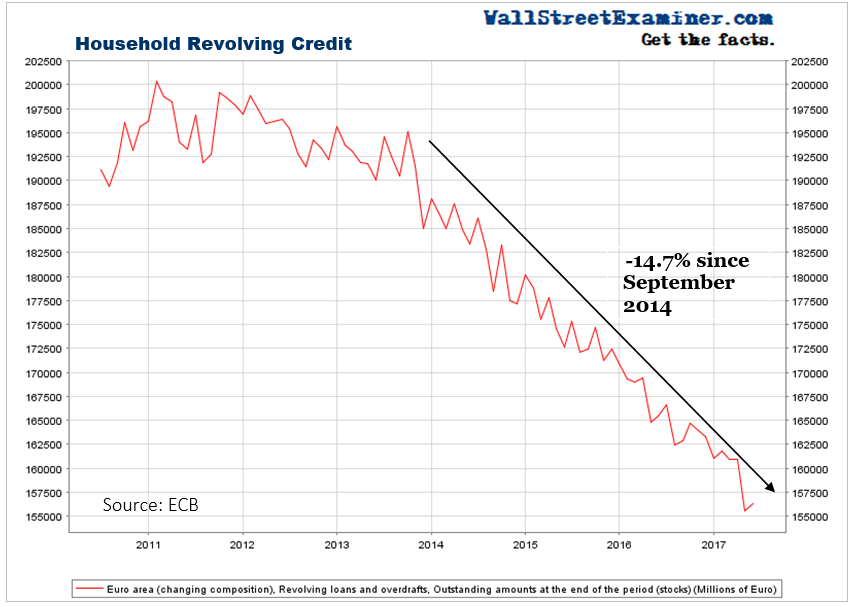 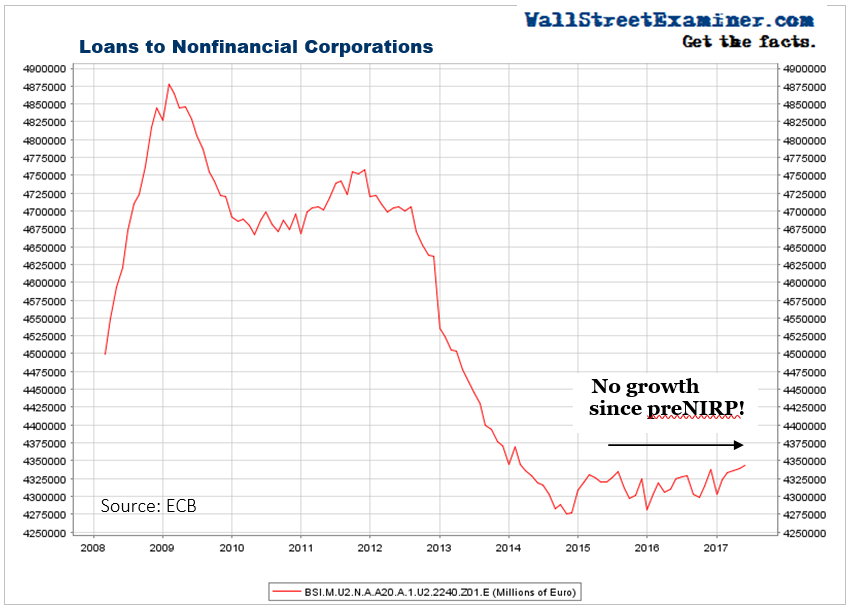 Business loans to nonfinancial corporations (NFC) (similar to the Commercial and Industrial Loans stat for US banks) rose by 0.1% in May. That followed similar increases in March and April. They are up 0.4% year to year. That’s what Mario Draghi calls progress.  Total loans to NFCs are still in the range that they were in during the year before the ECB started NIRP in 2014. If NIRP and QE and TLTRO were meant to stimulate business borrowing… FAIL.

Business revolving credit dropped 0.2% in May after dropping 0.8% in April. It is down 6.7% year over year. The 60-billion-euro spike in December 2014 coincided with the first TLTRO issue. That was completed paid down 18 months later and revolving credit to business continued to sink to new lows.  The March 2017 TLTRO had no impact. 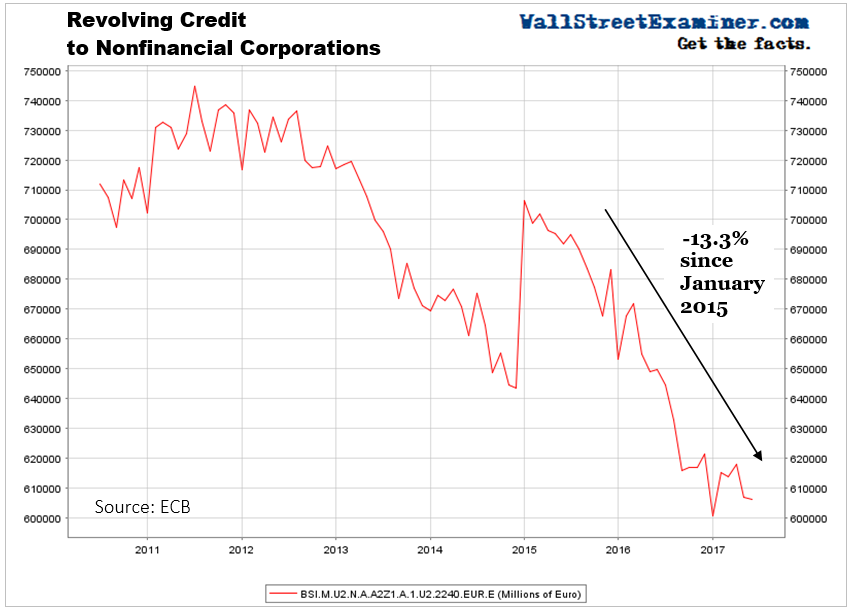 Let’s  consider again that in March the ECB put out €245 billion in TLTRO loans to banks with the specific purpose of stimulating lending. The ECB actually pays a direct bribe to the banks who take this money to use it to lend for the purpose of stimulating the European economy. So how much of this did the banks lend to businesses? In March European business loans rose by  €18 billion.  In April, businesses took nearly €10 billion, and in May, they took just €9 billion.  That’s a total of €37 billion.

There is no discernible difference in the growth rate of business loans before and after the LTRO.

So where did all those loans go?

Woop! There it is!

The banks lent the money to each other, collecting their bonus from the ECB in the process. Interbank lending rose by €197 billion in March, €97 billion in April, and €14 billion in April. That’s a total of €298 billion–a little more than the net LTRO issuance. That looks like round robin lending to me. Nobody really wants the money, so just pass it around and get paid by the ECB. Nice work if you can get it. 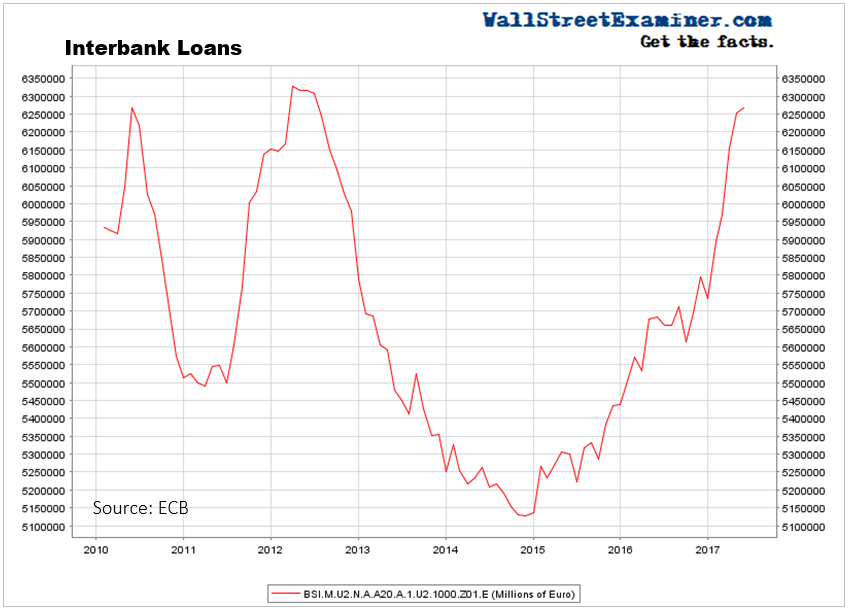 The ECBs extreme policies designed to stimulate animal spirits to get banks lending and speculators speculating have been an abject failure. The TLTRO has resulted in an outright scam–a legal scam, but a scam nevertheless. The ECB offered to pay banks a bonus for taking money that they would earn if they lend the money to customers. The ECB did not say that the banks could not lend the money to each other. Since there was no loan demand from businesses or households, the banks just lent the money to each other. They thereby got a stipend from the ECB for the 4 year term of these loans. It would be funny if it were not so tragic.

Europe’s banking problems are structural and can’t be fixed with monetary policy. European businesses have no reason to borrow and speculate on growing their businesses. There’s just no growth in final demand. The ECB’s policy of trying to stimulate more borrowing when there is already too much debt, particularly too much bad debt, is delusional.