Fed Chair Janet Yellen thinks the US economy is under-performing because we don’t have enough inflation:

“Inflation has continued to run below the committee’s 2 percent objective… the FOMC continues to expect inflation to move gradually back towards its objective….(but)… is mindful that inflation running persistently below its objective could pose risks to economic performance.”

This is not simply another case of “Let them eat iPads” cynicism. Hitting the wholly arbitrary 2% inflation target is sacred doctrine inside the Eccles Cathedral, and Yellen takes her scriptures, along with her money printing, every bit as literally did as the legendary William Jennings Bryan. Indeed, failing the inflation target “from below” amounts to a Cardinal Sin.

So not surprisingly, during the past 168 months running the rate of inflation according to the Fed’s preferred measure called the PCE deflator has come in exactly at a 2.0 CAGR—the annual rate embedded in the 14-year index gain of 31.65% shown in the table below. You might think the paint-by-the-numbers Keynesians who run the Fed would be thoroughly satisfied with their inflation targeting performance—even if, as Paul Volcker cogently noted, it does mathematically result in the theft of half of a working man’s savings over his lifetime.

Not exactly. The monetary politburo has been gumming about periodic bouts of too-low inflation and even “deflation” ever since Bernanke arrived in 2002. Yet unless the Fed’s unrelenting pursuit of “mission creep” has led it to the conclusion that its mandate under the wholly elastic and content-free Humphrey-Hawkins Act requires hitting its quantitative targets on an annualized seasonally-maladjusted basis every week, there is not a hint of inflation shortfall during the entire 21st Century to date.

In fact, the table below presents the cost-of-living increases that have been endured by that substantial share of the public which has eaten food or consumed fuel sometime during the past 14 years. At best, according to the official CPI—which is apparently good enough for 50 million Social Security recipients— the cost of living has actually risen by 2.4% per year or 39 percent over the period.

And even that’s got some self-evident understatement to it. Fully 25% of the CPI is accounted for by “imputed rents” on owner-occupied homes. This figure is obtained by a BLS survey of approximately 0.0002% of the nation’s 75 million homeowners asking what they would charge to rent their homes to a stranger each month. Needless to say, the tens of millions of households who have struggled with mortgage foreclosures, delinquencies and under-water loans since the housing bust have undoubtedly not been very bullish about their rental market prospects—even as their actual cash expenses for property taxes, utilities and household repair and maintenance expenses have continued to surge.

So when you get by the rent imputations and the “hedonic adjustments”  for cars, toasters, big screen TVs and iPads— the rest of the cost-of-living menu has been downright inflationary. Renters’ costs have risen one-third faster than the Fed’s target; electricity bills rose by double; college tuition is up by 2.3X and ground beef, eggs, movie tickets and health care by three-fold.  And, of course, hydrocarbon-based energy is not even in the Fed’s zip code: Gasoline prices have out-run the target by 5X since January 2000 and  home heating oil in places like the Northeast by 6X.

In short, the idea of “under-shooting inflation from below” is just ritual incantation. It provides the monetary central planners an excuse to keep the printing presses running red hot, but the true aim is not hard to see. After a 30 year rolling national LBO that has taken credit market debt outstanding to $59 trillion and to an off-the-charts leverage ratio of 3.5X national income, the American economy is saddled with $30 trillion of incremental household, business, financial and public debt compared to its historically sound leverage ratio of 1.5X GDP.

We are at peak debt. Household, business and government balance sheets are tapped-out.  The problem is not too little CPI inflation, but the unavoidability of a pay-back era of sustained debt deflation. Yet the entire purpose of the Fed’s money printing regime—ZIRP, QE and all the rest—-is to force more debt into an economy that is already saturated. And as I have demonstrated elsewhere, the end result is that the Fed’s massive liquidity injections do not flow into the busted and exhausted Main Street credit channel, but only into the “Wall Street Bubble Channel” where they fund endless carry trades, speculations and eventually rip-roaring bubbles. 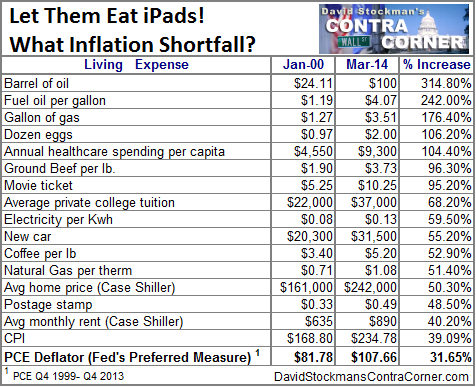 Nor has the picture changed since the 2008 financial crisis—that is, there exists no newly threatening deflationary bias, as shown below. Officially measured inflation continues to oscillate in a narrow band around 2% like it has since the late 1990s. The idea of missing the inflation target from below is just central bank jabberwocky—-a lie that actually harms the vast portion of Main Street America where incomes have lagged behind actual inflation for most of the 21st Century. 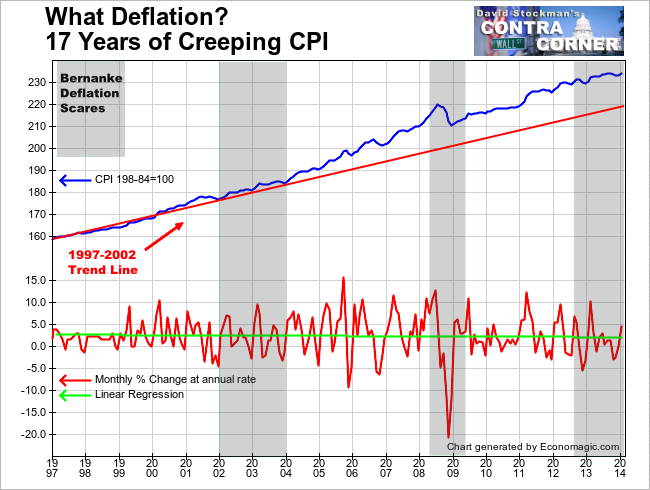