I recently wrote that OPEC’s “production risks to the upside,” as OPEC’s hopes for a supply-demand balance for 2017 have faded. I specifically mentioned that Libya and Nigeria want to restore production if and when they can.

Mohamed Oun, the country’s envoy to the Organization of the Petroleum Exporting Countries, said in an interview today, “Definitely, we will not agree to a freeze without reaching our quota from before,” which is 1.6 million barrels per day.

On Thursday, a “Black Swan Event” appeared in the news, that Libya was ready to double its production to 600,000 b/d within 4 weeks and to 950,000 b/d by year-end. At the same time, Nigeria was planning to restore more than 500,000 b/d of exports within days. I assessed that this scenario, if it materializes, could cause the crude oil market to re-test its lows of last February.

According to a recent report, Libyan oil exports have in fact resumed. The Seadelta had been waiting to load either on Friday or today.

The oil exports resumed, according to the Arab daily Al Hayat, with a Maltese-flagged tanker leaving the port of Zoueitina, with cargo bound for China.

U.S. Libya envoy Jonathan Winer called the shipment a “promising development” in a tweet, saying, “Well-placed Libyans say the military has withdrawn from the oil terminals,” leaving them in the hands of the country’s National Oil Company.”

In this article, I present my estimates of OPEC production and the world supply-demand balance based on OPEC’s latest projections, but including new additions to supply that could materialize. I note that conditions in these countries are unstable and so exports could be disrupted again.

Here is the scenario I published based on OPEC production remaining at August levels: 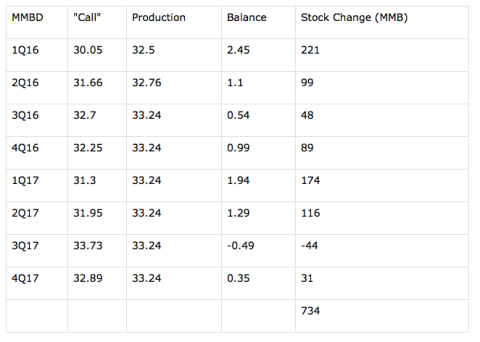 This assumes Libya can increase it exports by 300,000 b/d in 4 weeks and 600,000 b/d by year-end. Their actual production was previously at 1.6 million barrels per day, so their production could go much higher in 2017, or go back to where it was due to civil war:

Here are the additions Nigeria is planning to implement “within days”:

This scenario assumes Iran can achieve its 4.0 million barrel per day (mmbd) goal over the coming months:

Here are the planned increases to Iraq based on production deals recently signed:

Here is the new look at OPEC’s effect on the world supply-demand balance: 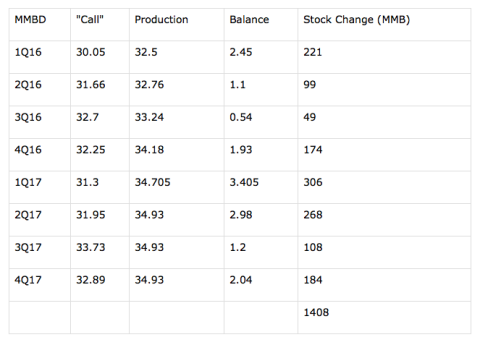 Total addition to world inventories is 1.4 billion, on top of the latest estimate of 3.1 billion barrels.

When OPEC and Russia meet this upcoming week, they have a new reality to address, the sudden onset of additional supplies from Libya and Nigeria of substantial magnitude. Libya, Nigeria, Iran and Iraq will not agree to withhold production increases.

These additions to world supply are, of course, uncertain due to political conditions. However, I think the market could re-test its lows of February if this scenario is realized.

Disclosure: I/we have no positions in any stocks mentioned, and no plans to initiate any positions within the next 72 hours.

I wrote this article myself, and it expresses my own opinions. I am not receiving compensation for it (other than from Seeking Alpha). I have no business relationship with any company whose stock is mentioned in this article.