It’s my favorite day of the month. The Bureau of Lies & Scams issues their double seasonally adjusted, massaged to provide a happy ending, birth death adjusted unemployment propaganda, designed to keep the masses in the dark about their own dire financial circumstances. Even though the equally manipulated GDP is at 1% or below, retail sales are plunging, corporate profits plummeted by 15% in the 4th quarter and Challenger & Grey corporate layoff announcements were up 42% in January versus last year, our fraudulent friends at the BLS announced glorious employment figures this morning.

The Establishment data that gets all the headlines blared that 242,000 net new jobs were created in February. Of course, 129,000 fake birth/death jobs were factored into that number. Anyone with a functioning brain (excludes Wall Street economists, CNBC shills, and any government apparatchik) knows that more businesses have been closing than opening for the last four years as Obamacare and government solutions destroy the economy. Rather than adding 129,000 jobs, small businesses likely subtracted 50,000 jobs in February. That would put the true number at about 60,000.

In a shocking coincidence, Trim Tabs, a privately run independent company that monitors actual real time payroll withholding tax info issued a report two days ago which said the number of new jobs created in February was between 55,000 and 85,000, based on actual withholding tax data. If you are employed, payroll taxes are automatically extracted. This data cannot be manipulated by the government propagandists. It reveals the truth. No seasonal adjustments, tweaks or phantom jobs added. It’s pure tax data.

The U.S. labor market is weaker than the conventional wisdom believes. We estimate based on real-time income tax withholdings that the U.S. economy added between 55,000 to 85,000 jobs in February, down from 175,000 to 205,000 jobs in January. Last month’s growth was the lowest since July 2013.

We cite a range rather than a single figure for our February estimate because the timing of bonus payments impacts withholdings at this time of year and makes our year-over-year analysis more challenging than usual. Part of the sharp deceleration in wage and salary growth in February was likely due to shifts in bonus payments, but the deceleration was too sharp to be explained by bonus-related factors alone.

Our estimate is not an attempt to predict the initial estimate that the Bureau of Labor Statistics (BLS) will report on Friday. The BLS data is subject to so many seasonal adjustments and so much statistical manipulation that we have no way to know what the BLS will report.

The Household Survey is even funnier. It shows that 530,000 jobs were created in February and the unemployment rate of 4.9% sits at eight year lows. A little digging into the numbers provides a couple nuggets.

The Obama jobs economic recovery in all its glory. The falsity of the headline numbers is borne out by the fact wages plunged in February. Average weekly earnings crashed from $878.15 to just $872.04, and at -0.7%, this was the biggest monthly drop in the entire series history. It seems government mandated minimum wage increases in January warped the data and February is the payback. The future layoffs from the government mandatory minimum wage increases will arrive shortly.

The reality is that wages have gone up by a measly 2.2% in the last year, with the bulk going to supervisory workers. The average hours worked in a  week DECLINED by 0.2 hours, a sure sign of economic growth. The work week is 0.2 hours lower than last February. The average working stiff is stuck with a part-time, low paying, service job with no benefits. Do you think Trump’s soaring poll numbers have anything to do with this “fantastic” jobs recovery? 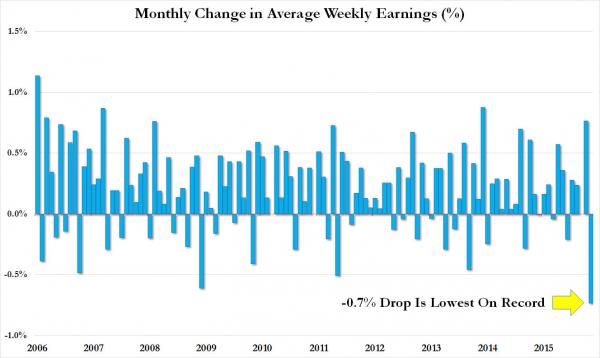 So, we have the BLS reporting tremendous job growth over the first two months of 2016, while actual payroll tax data and actual corporate layoff announcements showing little or no growth. Who to believe? Wages are dropping. The number of hours worked is dropping. The number of part-time jobs is soaring. The number of self employed Ebay sellers is going up. Retail sales are terrible. Polls show most people think the economy is on the wrong track. Corporate profits and all economic indicators indicate recession. Establishment politicians are being tarred and feathered. Do you believe the facts or do you believe the government manufactured propaganda, propagated by their corporate MSM mouthpieces, and peddled by the Wall Street criminal bankers?