Demand for Treasury coupons, as measured by the total bid at each auction, has risen over the past 12 months, but remains in a long term downtrend. 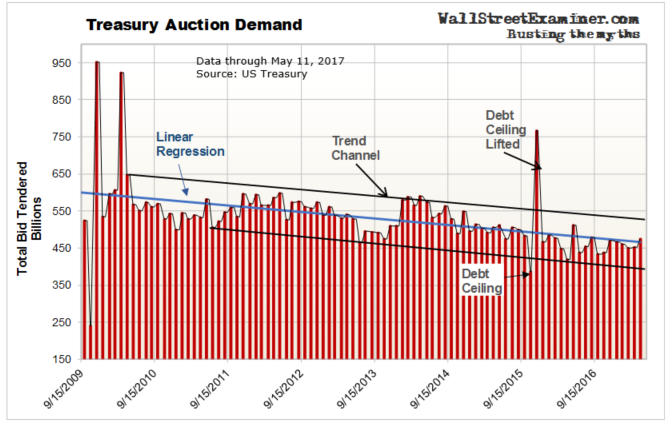 Whether this stabilization in the long term trend is temporary or something more lasting that may even lead to increasing demand remains to be seen. For now, the long term trend is intact, and therefore a bearish sign for the longer term. But in the short run, rising, or even stable demand will be bullish. Supply will be restricted because total Federal debt outstanding is now up against the debt ceiling.

A significant increase in supply is looming once the debt ceiling is lifted. The Treasury will need to raise funds to repay the internal accounts it raided. Any increase in spending, and/or any tax cuts, would add to Treasury issuance as deficits grow. If demand fails to keep pace, yields should rise sharply. The rally that should lie immediately ahead could be an opportunity to get short the Treasury market.

The Fed is now threatening to shrink its assets by not rolling over its existing holdings of Treasuries. Fed scuttlebutt has been that it will start the process within a year. The Treasury will then need to raise the money to repay the Fed by selling more bonds in the market. If demand does not rise accordingly, yields will rise.

Any decline in yield would be a short term effect of the debt issuance moratorium. Once the debt ceiling is raised, supply will come flooding back into the market, depressing prices and raising yields.

The 10 year Treasury yield has pulled back to a decade long trendline that it broke to the upside last December. If it holds here, the next target would be the secular trendline at 3%. If yield closes the month below 2.25, the next target would be around 2.05 based on this chart. That’s certainly possible with the debt ceiling restriction on new supply. The real question is what will happen after the debt ceiling is lifted. A monthly close above the trendline at 2.55 would suggest a move at least back to the secular trendline, which would be around 3.10 at the end of this year. 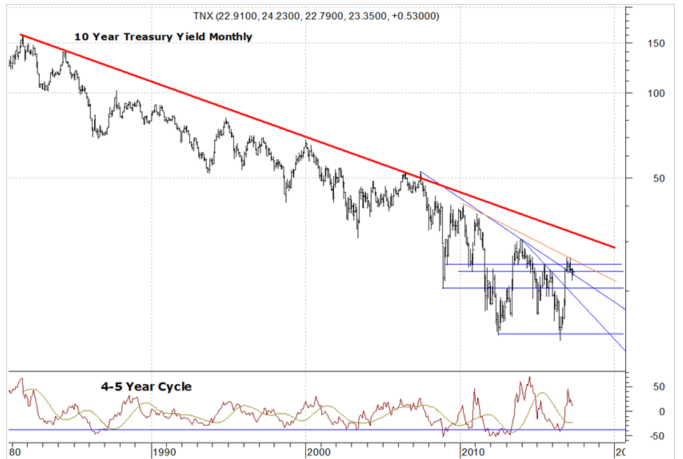 Among major demand indicators, Primary Dealer positions in Treasuries have reached their usual maximum of the past 5 years. They’re likely to be selling into any rally, helping to limit its extent. They know that when supply comes back, it will be in a huge surge, which would rapidly push prices down and yields up.

Primary Dealers added to their Treasury coupon long positions as well as Agencies and MBS in the month ended May 3. The slightly cut corporate holdings. They have maintained large long positions in Treasuries for the past 2 years.  Last week their net Treasury positions reached the trendline connecting peaks going back to 2012. Twice before, reaching that level was followed by a big selloff in bonds within 6 months.

The dealers hedge their cash bond positions in the futures markets. For the week ended May 9, 2017 dealer positions in Treasury coupon futures of all durations were net short approximately 793,000 contracts with a face value of $79.3 billion. That was sharp increase in short positions from the face value of $69.3 billion a month before.

The value of their long cash positions in T-notes and bonds was $91.7 billion, up from $73 billion 4 weeks before. On balance, considering both the futures and cash positions, the dealers were net long cash Treasuries versus futures by approximately $12 billion, up from $3 billion a month earlier. Their early April position was smallest net long position of the past year. The Dealers remain well hedged against a selloff in the bond market. I would not be surprised to see then go short on balance as the market rallies.

Foreign central bank buying is still uptrending, which is a bullish factor for now. However, the FCBs are due to cut back their buying, which could retard any rally flowing from reduced supply.

Commercial Bank buying of Treasuries has been weak for months. The markets have rallied in spite of that. Bank selling has reached a level where it often rebounds. Any increase in bank buying in the face of restricted supply would boost the expected rally in Treasuries. That could spill over into stocks.

That said commercial banks are a less important factor than Primary Dealers and FCBs.  Primary Dealers look extended on the long side, and foreign central banks are probably due for a pullback in their buying. It’s not a given that bonds will mount a massive rally from here. However, some kind of rally is likely. That would be a setup for a massive short against the bond and stock markets some time late this summer or early fall when the Treasury returns to the market after the debt ceiling is raised.