With the short-end of the Swiss yield curve yielding below -100bps, it was only a matter of time before things went entirely mad at the long-end and today for the first time in history Swiss 50Y yields have tumbled below zero (trading as low as -2.7bps) as US Treasury yields tumble to fresh record lows. 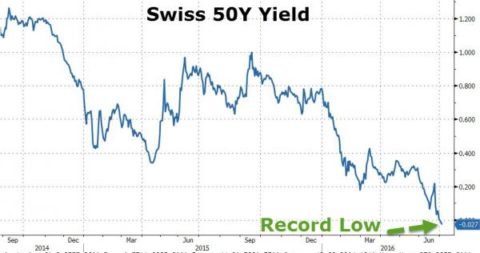 As Bloomberg notes, rising concern about the outlook for economic growth and inflation effectively means thatinvestors are paying the Swiss government for the privilege of lending to them out to 50 years.

Britain’s vote to leave the European Union has darkened the economic outlook beyond Britain’s shores and increased investor demand for safe-haven government bonds, even when the yield is below zero.

That’s because investors expect further interest rate cuts and monetary easing from central banks around the world in response to the increased uncertainty.

“It’s a reflection on the very bad prospects for the European and global economy,” said Ciaran O’Hagan, senior rates strategist at Societe Generale in Paris.

Source: Swiss Interest Rates Plunge To Negative Out To 50 Years