By Suzanne Kapner at The Wall Street Journal

Department stores need to close hundreds of locations if they want to regain the productivity they had a decade ago, according to new research from Green Street Advisors.

The real-estate research firm estimates that the closures could include roughly 800 department stores, or about a fifth of all anchor space in U.S. malls.

Sears Holdings Corp. alone would need to close 300, or 43%, of its Sears stores to regain the sales per square foot it had in 2006, adjusted for inflation, according to Green Street.

“Department stores used to be a great catchall for different brands, but today many of the brands have stores of their own, and shoppers can also find them online,” said DJ Busch, a senior Green Street analyst.

Sears and other retailers including Macy’s Inc. and J.C. Penney Co. have closed hundreds of stores in recent years as business has shifted to discounters or online merchants likeAmazon.com Inc. But the closures haven’t been enough to offset a drop in sales, Green Street said. 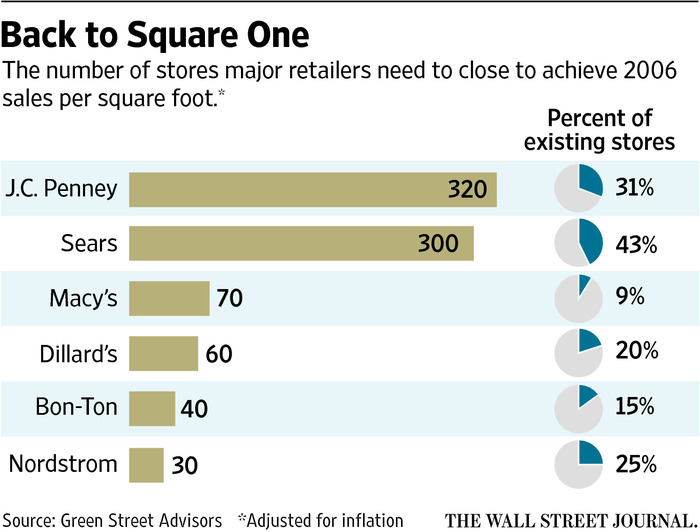 Sales at the nation’s department stores averaged $165 a square foot last year, a 24% drop since 2006, according to company disclosures and Green Street estimates. Over the same period, the stores reduced their physical footprint by 7% in aggregate.

Some chains have moved faster to cull their fleets than others. On Thursday, Sears said it would close 78 stores, including 68 Kmarts, this summer, part of a plan announced in February to “accelerate the closing of unprofitable stores.” But Penney has only closed seven stores this year out of a base of more than 1,000.

Green Street estimates that Penney would need to close a total of 320 locations, or 31% of its stores to return to its 2006 productivity levels, while Nordstrom Inc. would need to shutter 30 stores, or a quarter of its footprint. By comparison, Macy’s, which closed 40 stores last year, would only need to eliminate a further 70 locations, or 9% of its base, Green Street estimates.

While declining to comment on the specifics of Green Street’s report, the chains have indicated that mass store closings aren’t the right strategy.

A spokesman for Nordstrom said that all of its stores are profitable, and closing stores “is not our normal practice.”

In addition to closing unproductive locations, Macy’s has been trying to get more shoppers in the door by adding Bluemercury beauty shops and Backstage discount stores to its department stores.

It may be unrealistic to expect that department stores could ever return to historical levels of sales or profits given the changing dynamics of retailing. Many retailers say they make less money selling goods online than they do in their physical stores. And with the Internet making it easier for consumers to comparison shop, discounts have become the norm.

Department stores occupy about two-thirds of mall anchor space, and even though they are being replaced by restaurants, grocery stores, and big box retailers such as Dick’s Sporting Goods Inc. and Target Corp., there aren’t always enough new tenants to go around, said Green Street’s Mr. Busch.

The store glut has important implications for the country’s weaker malls, which rely on their anchors to drive foot traffic. “If department stores were to move forward and aggressively streamline their physical presence it could result in several hundred malls no longer being relevant retail destinations,” he said.