Manufacturing ISM Sinks to January 2009 Low; Don’t Count on Services or Housing to Save the Day

The perpetual optimists who month after month believe a manufacturing recovery is at hand are wrong once again.

Instead the reading dipped further into contraction, below the lowest estimate of 48.5.

ISM’s manufacturing sample is reporting the weakest conditions since July 2009. At 48.2, December is much lower than Econoday’s 49.2 consensus and is only the third sub-50 reading of the recovery. Yet the story, nevertheless, is much the same as it was in November which came in at 48.6 with both months showing slight contraction underway for both new orders and production. Employment in the sample, however, is noticeably weaker than November, at 48.1 for a more than 2 point decline and the second sub-50 reading in the last three months. A sizable 4.5 point rise for new export orders to 51.0 is a positive in the report. Inventories are steady and low but the sample still say inventories are a little bit high which betrays caution in their outlook. Prices for raw materials continue to contract, a reminder that low oil and commodity prices are making it difficult for the Fed to reach its 2 percent inflation target. This report points to ever softer conditions for a sector that, held down by energy and weak foreign demand, showed very little life during 2015. 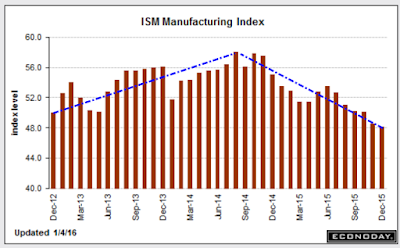 Don’t Count on Services or Housing

I have been pointing to this same chart for months. Something clearly turned late third or fourth quarter of 2014.

The consensus opinion was manufacturing did not matter and the service economy and housing would carry the day. I did not buy that theory then, and I sure don’t buy it today.

Housing has been weakening for many months, and the Chicago PMI, a measure of both services and manufacturing points to upcoming carnage in services in my opinion.