Mark Hulbert is the dean of market chart-watchers. So his warning that three key signals of a market correction are now flashing in unison, and that this condition has invariably led to a 20% market drop over the last 45 years, should not be taken lightly under any circumstance. But the present situation is rife with far greater peril than Hulbert’s half-century of market data implies. That’s because the Fed’s “all-in” plunge into bubble finance during the last two decades has rendered financial markets increasingly fragile and unstable.

On the on hand, ZIRP has fueled the most massive carry-trade speculation ever recorded.  Indeed, zero money market rates inherently tilt the scales toward relentless gambling in risk assets by essentially eliminating the carry cost of speculative positions. At the same time, the Fed’s implied “put” under the market has generated a relentless “buy on the dips” reflex among fast money traders and computerized algos. Accordingly, as the stock market bubble has inflated to ever more precarious heights since March 2009, the dips have become increasingly shallow and short-lived, as dramatically illustrated by the S&P 500 chart below:

The meaning of this pattern is straight forward.  This parabolic rise would never occur in an honest capital market unless the underlying economy was going through a surge of growth that has no precedent in recorded history. In fact, the US economy is impaled in more nearly the opposite condition—-that is, real GDP growth since the era of bubble finance hit full stride in 1999-2000, has been the lowest in modern history. Compared to a trend rate of 3.3% in the last half of the 20th century, real GDP growth has averaged just 1.8% per annum during the last 14 years. And that’s based on the understated GDP price deflators published by the Washington statistical mills.  The true rate of growth is surely far lower, if positive at all.

So the stock market has a additional layer of vulnerability that is not captured in Hulbert’s prescient charts.  Namely, that’s its natural mechanisms of two-way trade in which longs and shorts interact in an endless process of “price discovery” has been virtually destroyed by the Fed’s domination of financial markets. In brief, the natural short interest has been battered and punished for 68 months and has now been driven out of the markets completely.

Consequently, the natural braking function of short-sellers has been eviscerated.  So when the break implied by Hulbert’s charts actually materializes, there will not be much buying by short-sellers closing out their trades and harvesting their profits.  That means the ballast which under-pinned the 20% drop evident in the historical charts will not be present this time around.

The Fed’s serial bubble machine thus poses a double-danger to financial stability. It first fuels a massive bubble expansion and drastic over-valuation, but then leaves the market vulnerable to a  deep, violent correction of one-way trade on the way down, as well.

By Mark Hulbert at Market Watch

Over the past 45 years, the stock market has lost more than 20% each time three warning signs flashed simultaneously.

After a selloff this past week dragged the Dow Jones Industrial Average /quotes/zigman/627449/realtime DJIA -0.42%   into negative territory for the year, it’s worth noting that all three are flashing today. 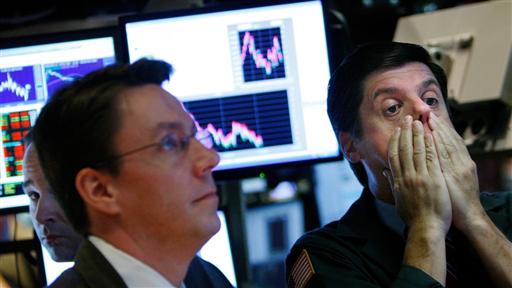 Mark Cook, a veteran investor who called three previous market crashes, believes the U.S. market is in trouble, to the tune of a 20% pullback. He joins MoneyBeat to explain. Photo: Getty Images.

The signals are excessive levels of bullish enthusiasm; significant overvaluation, based on measures like price/earnings ratios; and extreme divergences in the performances of different market sectors.

They have gone off in unison six times since 1970, according to Hayes Martin, president of Market Extremes , an investment consulting firm in New York whose research focus is major market turning points.

Bear in the air

In fact, no bear market has occurred without these three signs flashing at the same time. Once they do, the average length of time to the beginning of a decline is about one month, according to Martin.

The first two of these three market indicators — an overabundance of bulls and overvaluation of stocks — have been present for several months. Back in December, for example, the percentage of advisers who described themselves as bullish rose above 60%, a level Investors Intelligence, an investment service, considers “danger territory.” Its latest reading, as of Wednesday, was 56%.

Also beginning late last year, the price/earnings ratio for the Russell 2000 index of smaller-cap stocks, after excluding negative earnings, rose to its highest level since the benchmark was created in 1984 — higher even than at the October 2007 bull-market high or the March 2000 top of the Internet bubble.

Three strikes and you’re out

The third of Martin’s trio of bearish omens emerged just recently, which is why in late July he advised clients to sell stocks and hold cash. That’s when the fraction of stocks participating in the bull market, which already had been slipping, declined markedly.

One measure of this waning participation is the percentage of stocks trading above an average of their prices over the previous four weeks. Among stocks listed on the New York Stock Exchange, this proportion fell from 82% at the beginning of July to just 50% on the day the S&P 500 hit its all-time high.

It was one of “the sharpest breakdowns in market breadth that I’ve ever seen in so short a period of time,” Martin says.

How big of a decline is likely? Martin’s best guess is a loss of between 13% and 20% for the S&P 500, less than the 38% average decline following past occasions when his triad of unfavorable indicators was present. The reason? He expects the Federal Reserve to quickly “step in to provide extreme liquidity to blunt the decline.”

To be sure, Martin focuses on a small sample, which makes it difficult to draw robust statistical conclusions. But David Aronson, a former finance professor at Baruch College in New York who now runs a website that makes complex statistical tests available to investors, says that this limitation is unavoidable when focusing on past market tops, since “by definition it will involve a small sample.”

He says that he has closely analyzed Martin’s research and takes his forecast of a market drop “very seriously.”

Martin says that expanding his sample isn’t possible because most of his current indicators didn’t exist before the 1970s and “the comparative math gets very unreliable.” But he says he does use several statistical techniques for dealing with small samples that increase his confidence in the conclusions that his research draws.

He says stocks with smaller market capitalizations will be the hardest hit in the decline he is anticipating, in part because they currently are so overvalued. He forecasts that the Russell 2000 will fall by as much as 30%.

Also among the hardest-hit stocks during a decline will be those with the highest “betas” — that is, those with the most pronounced historical tendencies to rise or fall by more than the overall market. Martin singles out semiconductors in particular — and technology stocks generally — as high-beta sectors.

He predicts that blue-chip stocks, particularly those that pay a large dividend, will lose the least in any decline. One exchange-traded fund that invests in such stocks is iShares Select Dividend /quotes/zigman/335187/delayed/quotes/nls/dvy DVY +0.04%  , which charges annual expenses of 0.40%, or $40 per $10,000 invested.

The average dividend yield of the stocks the fund owns is 3%; that yield is calculated by dividing a company’s annual dividend by its stock price. Though the fund’s yield is higher than the S&P 500’s 2% yield, it nevertheless pursues a defensive strategy. It invests in the highest-dividend-paying blue-chip stocks only after excluding firms whose five-year dividend growth rate is negative, those whose dividends as a percentage of earnings per share exceed 60% and those whose average daily trading volume is less than 200,000 shares.

The consumer-staples sector has also held up relatively well during past declines. The Consumer Staples Select Sector SPDR ETF /quotes/zigman/246134/delayed/quotes/nls/xlp XLP +0.77%  currently has a dividend yield of 2.5% and an annual expense ratio of 0.16%.

If the broad market’s loss is in the 13%-to-20% range that Martin anticipates, and you have a large amount of unrealized capital gains in your taxable portfolio, you could lose in taxes what you gain by selling to sidestep the decline. But the larger losses he anticipates for smaller-cap stocks could be big enough to justify selling and paying the taxes on your gains.