Meet The Disability Judge Who Snoozes In Court And Always Awards Benefits—-$2.5 Billion So Far 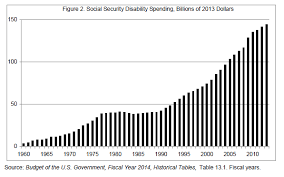 If you have wondered why the social security disability (DI) rolls are soaring, the article below may prove enlightening. Also note that the table immediately below is in inflation-adjusted 2013 dollars. That means that the program’s cost has grown nearly 8X in real terms since 1970 compared to less than a 3X expansion of the labor force. 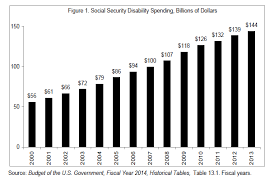 The $150 billion annual cost shown in the table is only for DI benefits per se. It does not include  the whole range of associated benefits such as Medicare, which DI recipients under 65 automatically receive, as well as Medicaid, food stamps, housing assistance and other transfer programs. Altogether DI currently generates an expense of easily one-quarter trillion per year among the 9 million beneficiaries and approximately three million additional dependents.

Needless to say, the DI program is plagued with huge structural flaws. The most important one goes back to the beginning of social security during the New Deal—followed by the addition of the DI benefit during the 1950s.  Both the social security retirement program (OASI) and the disability programs masquerade as “earned insurance benefits” when they are nothing of the kind. The trust funds have no assets, just paper IOUs from the US Treasury; and in the case of the DI component, even the Treasury IOUs will be gone by 2017 at the latest.

So DI is already broke and OASI is only a decade or so behind. The truth of the matter is that these are merely intergenerational transfer programs based on a Ponzi finance scheme. Namely, an arrangement by which nearly all current beneficiaries get back far more than they contributed in payroll taxes (even after adjustment for inflation). This largesse, in turn, is based on the assumption that there will always be a rapidly growing economy and that a perpetually expanding work force can shoulder the tax burden without undue sacrifice.

Self-evidently, that assumption is being invalidated every month that the current “recovery” bumps along the bottom at under 2% growth and fails to attain “escape velocity”. Indeed, when DI was established during the 1950s the trend real GDP growth rate exceeded 3.5%. That is virtually double the lowest in modern history growth rate of 1.7% that the US economy has experienced during the past 14 years.

So it is only a matter of time before the Ponzi unravels. When it does, a profound truth will become self-evident. Namely, that when a modern democracy promises universal benefits to the entire population without means testing or other rigorous proof of need, it thereby promises to bankrupt itself.

As shown in the charts below, we are well on the way. Just since early 2009, the DI rolls have increased by nearly 20%, while the labor force participation rate has plummeted. In short, the Ponzi is unwinding—with the base of future “payroll insurance” payers shrinking, even as the beneficiary count continues to soar. That the DI population is rising rapidly seems counter-intuitive. The number of workers in the hazardous goods producing industries— manufacturing, mining and construction— has dropped from 25 million in 1979 to 19 million today. Yet it is evident as to why the DI rolls are soaring.  The rate of awards for ” mental and musculoskeletal” conditions has increased by 3X since 1980. In that context, the results of the House investigation of DI ALJ’s who have ultra-high award rates provides further evidence as to why a day of reckoning for the social security Ponzi is not too far down the road.

By Elizabeth Harrington at The Washington Free Beacon

The House Committee on Oversight and Government Reform released a report on Tuesday examining administrative law judges (ALJs) who approve disability claims more than 75 percent of the time. The so-called “red-flag” judges approved benefits for 1.3 million people between 2005 and 2013, amounting to $394 billion in lifetime disability payments.

The report takes a closer look at three judges who have approval rates over 90 percent, and accounted for the distribution of $10 billion in benefits alone: Charles Bridges, David Daugherty, and Harry Taylor.

“These ALJs awarded benefits in nearly every decision they made, issued an extremely large number of allowances without holding a hearing, and were subject to numerous complaints from employees within their offices,” the report said.

An ALJ for more than 25 years, Taylor approves almost 94 percent of the disability claims that reach his courtroom, and has been accused of sleeping during hearings he has presided over.

Taylor approved roughly $2.5 billion in benefits between 2005 and 2013 to 8,227 individuals. Sixty-eight percent of those decisions were held without a hearing.

“In addition to multiple allegations of personal misconduct, ALJ Taylor slept at work and during hearings many times,” the report said. “Four years after the first documented allegation that ALJ Taylor was sleeping at work, he was finally disciplined with a 14-day suspension. However, ALJ Taylor continued to violate agency policies, and was recommended for another suspension in April 2013.”

“More than a year later, the recommendation for his suspension is still pending and ALJ Taylor continues to decide a full load of cases,” the report said.

The SSA oversees two disability programs, Social Security Disability Insurance (SSDI) and Supplemental Security Income (SSI), which have grown “unsustainably” in recent decades, and now enroll 19.4 million people. The disability trust fund will be depleted by 2016, unless the programs are reformed, according to the Social Security Board of Trustees.

Individuals applying for disability benefits must be denied twice before their case reaches an ALJ.

Judges can have a tremendous impact on the amount of benefits distributed through the programs. Overall, ALJ’s added more than 3.2 million people to federal disability between 2005 and 2013, at a cost of nearly $1 trillion.

“If an ALJ improperly awards disability benefits to just 100 people, they increase the present value of federal spending by $30 million,” the report said.

Furthermore, once approved for disability, individuals “almost never go back to work.” “Less than one percent of those who were on SSDI at the beginning of 2011 have returned to the workforce,” the report said.

ALJ’s are supposed to consider any and all objective medical evidence, statements, information from doctors, and the individual’s own account about their symptoms. However, the House committee found numerous examples of judges not adhering to these standards.

For instance, the majority of decisions made by Charles Bridges, an ALJ in Harrisburg, Pa., were “not supported by substantial evidence and contained no specific findings regarding the claimant’s credibility.”

Bridges approves benefits over 95 percent of the time, costing taxpayers $4.5 billion. He has faced numerous complaints from his employees, though he has never been disciplined and continues to handle a full caseload.

When testifying before the committee on Tuesday, Chairman Darrell Issa (R., Calif.) asked Bridges if he was aware of his high approval rate, and whether that posed any concern. Bridges said “no.”

“I don’t want to be influenced by that, so I take each case at a time,” Bridges said.

The report noted that Bridges brags about his office’s high amount of dispositions, and that he “awarded a trophy each month to the ALJ with the highest dispositions.”

Former ALJ David Daugherty also was referenced in the report for conducting “sham hearings” and his high number of approvals. Six other ALJs had higher allowance rates despite his approval rate of nearly 99 percent.

Daugherty awarded $2.5 billion in lifetime benefits from 2005 until he was forced to resign in 2011 after the Wall Street Journal exposed his scheme with a Kentucky lawyer to approve fraudulent disability claims. However, Daugherty “continues to collect full federal retirement benefits.”

In a random sample of 128 decisions, Daugherty held only one hearing lasting longer than five minutes. His misconduct was “ignored by SSA management for decades,” the report said.

According to many ALJs cited in the report, the agency “prioritized speed of processing cases over accuracy,” allowing ineligible Americans to receive disability benefits.

“As a result of the agency’s emphasis on high volume adjudications over quality decision-making, the credibility of the disability appeals process has been eroded,” the report said. “Genuinely disabled individuals are harmed from the programs’ explosive growth and face large future benefit cuts as the SSDI trust fund is scheduled for bankruptcy in two years because the program has too many beneficiaries who do not meet the disability programs’ requirements.”

“Moreover, the tens of millions of Americans who pay taxes to finance federal disability programs have seen their hard-earned tax dollars squandered because of the agency mismanagement that potentially has led to hundreds of billions of dollars of improper payments,” the report added.