By VIPAL MONGA at The Wall Street Journal

Companies reaching for better returns on their cash have found a new favorite investment—other companies’ bonds—and they are loading up.

More than half of corporate cash held by U.S. companies this August was invested in investment-grade corporate bonds, a record, according to investment-software company Clearwater Analytics. Meanwhile, treasurers have reduced their companies’ holdings of more traditional investments such as U.S. Treasurys, commercial paper and bank certificates of deposit.

Companies are betting highly rated corporate bonds are safe repositories for cash that will pay higher rates than more traditional bank deposits or money-market funds. But they are also increasing the risk to an asset where principal protection is the priority.

If interest rates rise quickly, the value of their lower-yielding existing bonds could plummet. A major market disruption could also make it difficult for companies to sell their holdings if they need the cash. Either could lead to write-downs or actual losses if they sell at lower prices than they paid.

For now, treasurers are figuring the bet isn’t that risky. Companies’ balance sheets are in good shape, and buyers are focusing on bonds that mature within five years, which carry lower risks than bonds that take longer to mature.

Still, the past offers plenty of examples of companies that got burned when reaching for yield. Procter & Gamble Co. lost more than $100 million after it bought derivatives from Bankers Trust Co. in 1993 in an unsuccessful bet that interest rates would remain low. MetroPCS Communications Inc. wrote down millions in investments in 2007 because it invested in auction-rate securities and couldn’t sell the holdings. Even mainstream investments can have hiccups in tough times. After Lehman Brothers Holdings Inc.’s 2008 collapse during the financial panic, Goodyear Tire & Rubber Co. was forced to borrow $600 million from its credit lines because it couldn’t access cash trapped in locked money-market funds.

“To get more return, you have to take more credit risk,” said a treasurer at a large technology company that has actively been buying corporate bonds. 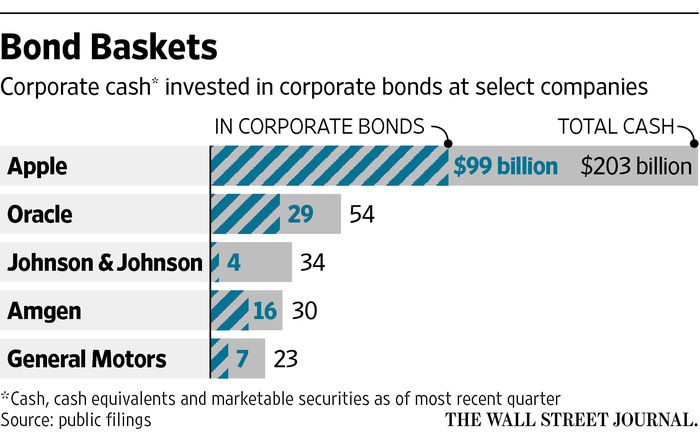 Aggressive buying by their peers is one factor that has spurred U.S. companies to issue enormous quantities of debt. As of Sept. 24, issuance of investment-grade corporate debt including financial borrowers hit $1 trillion in 2015, on pace for a record year, according to data tracker Dealogic.

One frustration for treasurers is short-term interest rates that have remained near zero since late 2008. Adding to that is a bevy of regulations that have made it more difficult for them to park money in bank accounts or money funds.

New banking rules by the Federal Reserve have made it more expensive for banks to hold large corporate deposits. As a result, they are discouraging companies from socking too much money away in their accounts.

New Securities and Exchange Commission rules could make money-market funds less attractive by forcing them to abandon their $1 share price and allow them to impose fees on shareholders for withdrawing assets or suspend redemptions temporarily to thwart panic selling.

That makes treasurers’ less confident that they will get all their money back, and have access to their money, in a crisis. The rules won’t take effect for another year, but treasurers are already turning elsewhere.

The biggest corporate investors in bonds come from the technology and pharmaceuticals sectors, where companies have cash to spare.
iPhone maker Apple, for one, held almost $100 billion worth of corporate bonds at the end of June. That was a 25% increase from the end of its 2014 fiscal year, representing almost half the cash and cash equivalents on its balance sheet. The total is also almost equal to the value of bonds issued in June this year.

Oracle, the business-software maker, held $28.9 billion in corporate debt at the end of May, 73% more than a year ago. The bonds made up 53% of the company’s cash and equivalent assets.

Pharmaceutical giant Johnson & Johnson held $3.5 billion of corporate bonds at the end of June, roughly 10% of its liquid, financial assets, and a 162% increase from the end of 2014. Rival Amgen Inc. held $15.9 billion in bonds at end of June, up 22% from December.

Many of those companies also have much of their cash in Europe, where rates are even lower than in the U.S. With few places to put it, and unable to bring the funds home without paying U.S. taxes, the corporations are investing in the bond market, said one banker who has sold bonds to companies.

“They’ve gone from an infrequently seen but nice-to-have participant to a very commonly seen participant,” the banker said.

Borrowers say companies are playing big roles in some large transactions. When Verizon issued the largest bond on record two years ago to fund the takeover of Vodafone Group PLC’s share of their U.S. wireless joint venture, many “large companies” helped take down the $49 billion in securities, said Fran Shammo, the company’s finance chief. He declined to name them.

Earlier this month, corporations were among the bidders for $10 billion in bonds issued by pharmaceutical giant Gilead, a person familiar with the transaction said.

The corporate buyers have started to make their presence felt in the market. As their appetite for bonds has increased, prices for securities with shorter maturities have risen, said John Majoros, a managing director at Wasmer, Schroeder & Co., which manages $5.5 billion in assets.

He said his firm has been buying bonds with longer maturities to get around that competition and hopefully find better bargains.

Home-improvement retailer Lowe’s Cos. was able to sell $250 million of bonds maturing in 2018 at full price earlier this month because of high demand. Conversely, it offered debt maturing in 10 and 30 years at a discount to entice investors. Investors ask for discounts on securities to boost their yields.

The bond buying is causing companies to act like mutual funds or brokers, investing cash on behalf of their shareholders, arguedVictoria Ivashina, a finance professor at Harvard Business School.

“This is a risky business,” she said. “Can they get it wrong? Absolutely they can get it wrong.”