Milton Berg: “We Are On The Cusp Of A 30 Year Bear Market”

At the SALT conference, MB Advisors founder and CEO Milton Berg gave an epic interview with Erik Schatzker in which Bergpredicted that we are on the verge of a 30 year bear market in both equity and fixed income, and he also gave some sage advice to the average retail investor on what to do with their money at this point.

This is how Milton Berg explains his prediction

“I think we’re at the cusp of a bear market in both stocks and bonds that will last up to thirty years. This is on a real basis, not on a nominal basis, inflation adjusted basis.”

Here is the reason why Berg believes you can invest in the market today, go to sleep, wake up thirty years later and have made no money…

“Well, it is not unheard of in history. As you know there was a bear market in bonds lasting maybe forty years that began in the mid-40’s and ended in 1980. We’ve had a twenty, twenty five year bear market in Japan going back to 1989. We’re the most overvalued market in history, there’s more leverage throughout the world than there’s ever been in history, central banks have lost all their ammunition, basically because there is so much credit outstanding throughout the world. It’s not unheard of to have a long-term bear market. There will be a lot of money to be made both on the downside and the upside within the bear market.”

Milton then explains that world-wide, this is currently the most over valued equity market in history

“World-wide, looking at all the equity markets we’re definitely at the most over-valued. P/E ratios on the New York Stock Exchange are just above the P/E ratio at the trough of 2009, the median P/E ratio. Markets are way over valued. If you look at where yields were thirty, fourty years ago when you got five, six, seven percent and now you’re getting one percent, one and a half percent yield, way over valued.”

When asked what would happen if central bankers were to follow through on their whatever it takes promises, Berg gave the most rational response, which is that everything is relative.

“If whatever it takes means Zimbabwe, or hyperinflation Germany, stocks will do well, but not relative to the inflation rate.“

Furthering his comments around central banks, Berg delivered some truthiness to the fact that creating more debt won’t fix anything in the system, and as a matter of fact, will simply make the outcome worse once the bubble pops.

“They’re doing something that makes no sense with negative rates, but there’s so much credit in the system that just allowing people to borrow more money doesn’t really help the system. It just causes a greater bubble, which ultimately will deflate. It’s one big world-wide bubble, the central banks are all acting in unison, so once this bubble pricks it’s going to be pretty terrible.“

“The typical investor should be out of stocks and out of bonds, wait for a crisis, and buy during the crisis. Put your money under the pillow and wait until the next crisis.”

Milton is spot on, and here is a reminder of just how far down it is from here if markets enter bear territory (and could serve as a quick sanity check on current valuation levels). 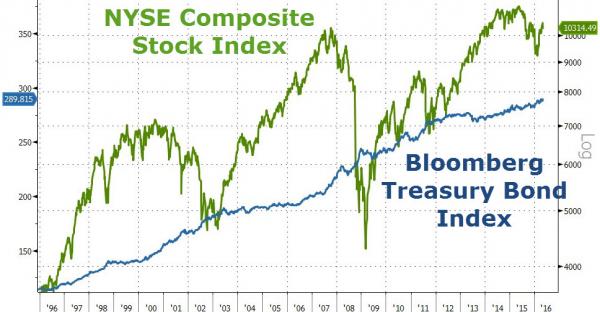 Source: Milton Berg: “We Are On the Cusp of a 30 Year Bear Market” – ZeroHedge