By TELIS DEMOS, SHIRA OVIDE and SUSAN PULLIAM at The Wall Street Journal

Hortonworks Inc. Chief Executive Rob Bearden forecast in March 2014 that the software firm would have a “strong $100 million run rate” by year-end. But the number looked a lot smaller after Hortonworks went public and then reported financial results: just $46 million in revenue last year.

It turns out that Mr. Bearden wasn’t talking about revenue, though he didn’t say so at the time. The Santa Clara, Calif., company now says the $100 million target was for “billings,” a gauge of future business that isn’t part of generally accepted accounting principles. Mr. Bearden declines to comment.

As young technology companies jostle for investors who will pour money into the firms as they try to make it big and strike it rich, some companies are using unconventional financial terms.

The practice is perfectly legal and doesn’t violate securities rules because the companies haven’t sold shares in an initial public offering. Public companies can use “non-GAAP” financial terms but must explain them and disclose how they differ from measurements that follow strict accounting rules.

When Mr. Bearden made his forecast last year, Hortonworks had just raised $100 million that valued the company at more than $1 billion. It went public in December, now has a stock-market value of about $1.1 billion and is required to abide by accounting rules that include disclosing the company’s actual revenue.

Up-and-coming companies that see themselves through rose-colored glasses are of little concern to many venture capitalists and other investors as long as growth remains strong. Many tech-company executives say nontraditional numbers often are a better barometer of a firm’s progress at luring customers, outrunning competitors and pushing the company’s value higher.

No room for error
Skeptics claim that the practice is yet another sign that the tech sector is plagued with overconfidence and setting itself up for a fall. They say investors who go along with vague, unconventional financial terms are inflating valuations and leaving almost no room for error at fledgling technology companies.

Bill Gurley, a partner at venture-capital firm Benchmark in San Francisco, complained on his blog in February that many large investments in tech startups are sold based on a PowerPoint pitch.

“Investors are assuming that the numbers they see in the fund-raising deck are the same as those they might see” in an IPO filing, he wrote. Some investors “have essentially abandoned their traditional risk analysis” out of fear they might miss out on the next big thing.

Benchmark was one of the earliest investors in Hortonworks. Mr. Gurley says it was transparent about its finances before the IPO.

The Wall Street Journal compared sales figures and projections made by 50 tech companies when they were private with financial results reported later for the same period. Fifteen of those firms, including Hortonworks, reported lower numbers. In at least six cases, the difference was caused by using more conservative accounting measurements when the companies went public. 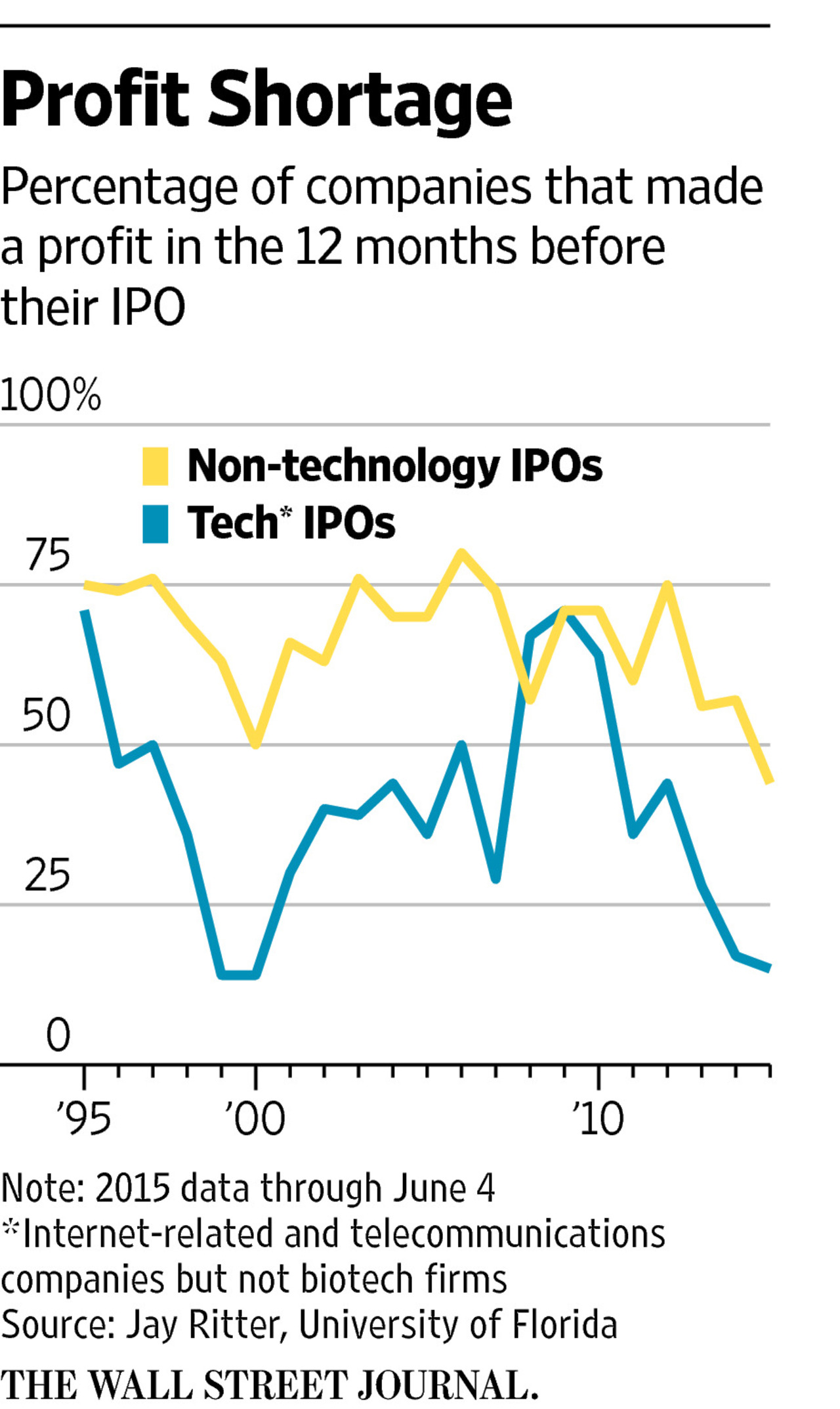 The combined decline by the 15 companies was about $760 million, or 25% of their original sales or projections, according to the Journal’s analysis. The calculations included the 50 largest U.S.-listed IPOs since 2013 by venture-capital-backed tech companies, based on data from Thomson Reuters Corp. and the National Venture Capital Association.

The Securities and Exchange Commission usually doesn’t intervene until a company seeks regulatory approval for an IPO. The agency declines to comment but is increasing its scrutiny of non-GAAP terms at young companies.

According to law firm Proskauer Rose LLP, the SEC last year asked 88% of technology, media and telecommunications companies preparing for IPOs questions about how the firms accounted for revenue, up from 79% in 2013. Last year’s average across all industry groups was 46%.

During the dot-com bubble of the late 1990s, some young companies cited runaway growth in “eyeballs,” website visitors and other non-GAAP terms. The current crop of publicly traded tech companies includes some that report two sets of earnings. One is based on generally accepted accounting principles. The other excludes certain charges, especially stock-based compensation for employees.

Some sticklers say the wide gap between the two numbers recently is a worrisome sign of excess. But firms like Facebook, LinkedIn Corp. and Twitter Inc., with a combined stock-market value of about $280 billion, disclose publicly a flood of financial information compared with the private tech companies trying to attract investors. The information released by private firms varies widely.

“The chances of surprises go up a lot more,” says Venky Ganesan, a venture-capital investor at Menlo Ventures. “It’s not to say the numbers are wrong, but that’s when caveat emptor really applies.”

Before the Menlo Park, Calif., firm invests, it insists on seeing individual transactions to make its own judgments about company revenue, Mr. Ganesan says. 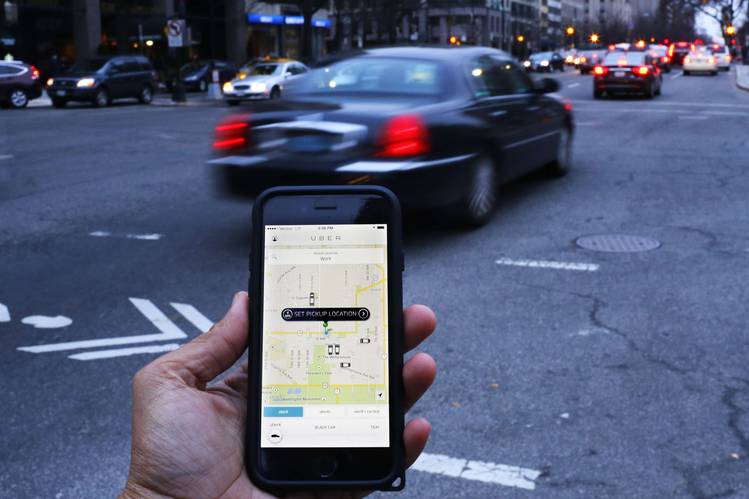 Some Uber investors have been told that “bookings” are on pace to reach $10 billion in 2015. Uber keeps little of the money from all those bookings. PHOTO: ANDREW CABALLERO-REYNOLDS/AGENCE FRANCE-PRESSE/GETTY IMAGES
Investors keep lining up even though just two of the 13 tech companies that went public so far this year through June 4 made a profit in the 12 months before their IPO, according to Jay Ritter, a finance professor at the University of Florida.

Last year’s rate of 17% was the lowest for a full year since 2000. In 2010, about two-thirds of tech companies were profitable before going public.

Executives at young companies have lots of opportunities to do “whatever they need to do to generate magic metrics, whether they are relevant in the long run or not” says Lise Buyer, an adviser to Silicon Valley companies and former technology investment banker who worked at Google Inc. when it went public in 2004.

In 2010, Rubicon Project Inc. said on an in-house blog that it “achieved profitability.” Advertising volume on the Los Angeles company’s online network “generates over $100 million in revenue annually.”

Todd Tappin, Rubicon’s chief operating officer and chief financial officer, says it was common in 2010 for advertising-technology companies to cite numbers that reflected all the ad transactions made on their networks.

Since then, Rubicon has worked with the SEC to determine the best way to measure revenue, he adds. In the company’s financial statements, “revenue” includes only the money that flows to Rubicon.

The company still uses the term “managed revenue,” which it defines as a way to track “advertising spending transacted on our platform.” Mr. Tappin says it is “an important metric” to help show “as much visibility as you can.” Managed revenue rose to $667.8 million last year from $238.8 million in 2011.

News Corp, which owns the The Wall Street Journal, has a 12.5% stake in Rubicon, according to a securities filing and News Corp spokesman. The filing also said the companies have “various commercial relationships,” but he declines to comment.

Another ad-technology firm, MoPub Inc., announced on its company blog in May 2013 that it “hit a $100MM annual run rate this month.” Chief Executive Jim Payne added: “We couldn’t have imagined when we launched our Marketplace 18 months ago that we would have a $100M revenue business so quickly thereafter.” 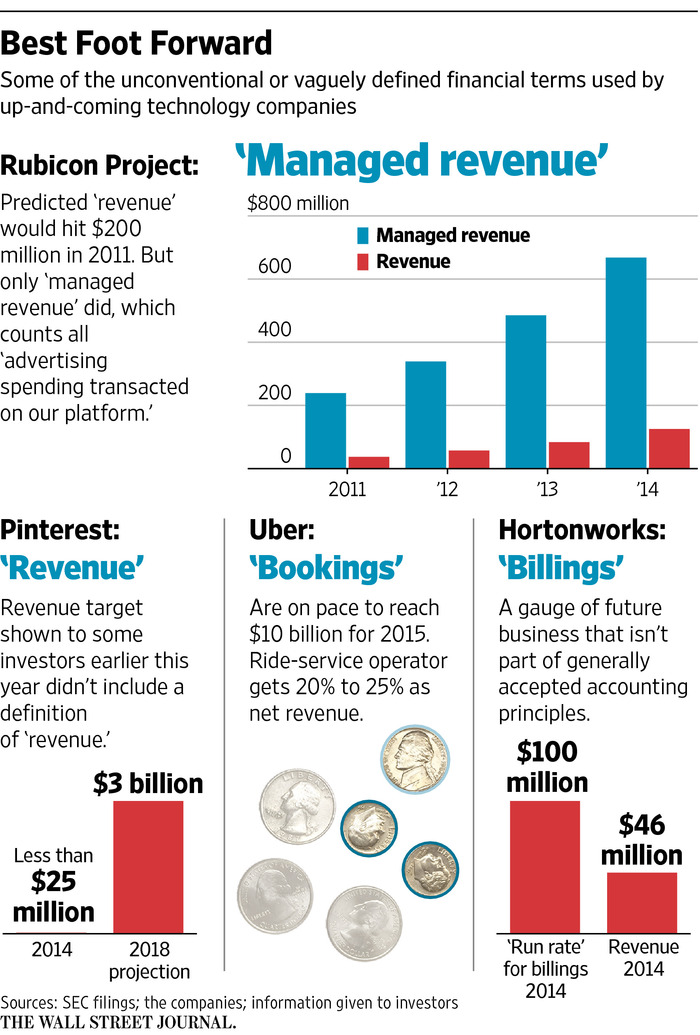 Twitter acquired MoPub in October 2013 for about $350 million. After the takeover, Twitter said MoPub had revenue of $6.5 million in the first half of 2013.

Mr. Payne, who no longer works at MoPub or Twitter, says the $100 million cited in the blog post represented the total value of ad spots placed on websites by MoPub. “No one is really checking the numbers,” he says.

A spokesman at Twitter says the discrepancy largely reflects the difference between gross revenue and net revenue at the acquired company.

Big on ‘bookings’
Uber Technologies Inc., the world’s most highly capitalized startup, has dazzled investors with its growth in “bookings.” Some investors have been told the number is on pace to reach $10 billion for 2015. Investors recently valued Uber, based in San Francisco, at $41 billion, and the company plans to raise $1.5 billion to $2 billion in new funding that could value Uber at $50 billion or higher.

Uber keeps little of the money from all those bookings. After payments to drivers and discounts on rides, the company gets 20 cents to 25 cents of every $1, say people familiar with its finances. If Uber were publicly traded, it would report the smaller number as net revenue, these people add.

Executives at Uber debated using other terms, such as “gross revenue,” to describe the total fares paid by customers but chose “bookings” because the executives saw that as a more conservative approach, according to people familiar with the matter. Uber declines to comment.

Privately held data-analysis firm Palantir Technologies Inc., valued at $15 billion last November, also emphasizes growth in bookings. At the Palo Alto, Calif., company, the term reflects the long-term value of some software contracts rather than only payments collected in the short run.

A Pinterest employee walks past the visual bookmarking site’s Lego wall. The company recently told potential investors that it could have revenue of $3 billion in 2018, but an offering document didn’t define “revenue.” 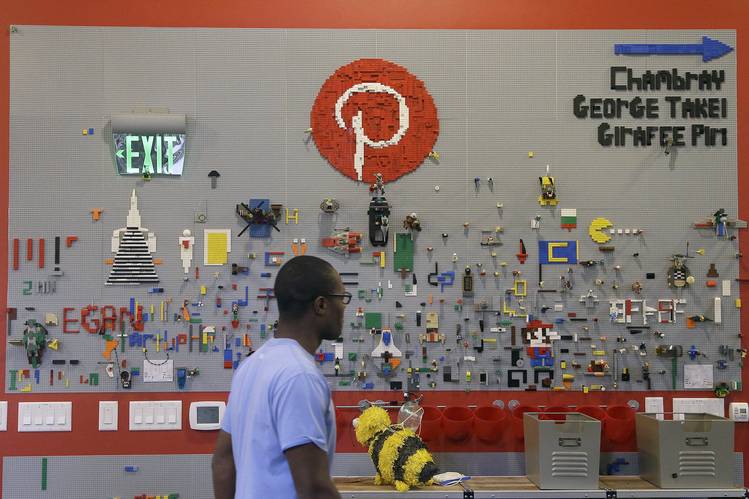 ENLARGE
A Pinterest employee walks past the visual bookmarking site’s Lego wall. The company recently told potential investors that it could have revenue of $3 billion in 2018, but an offering document didn’t define “revenue.” PHOTO: JEFF CHIU/ASSOCIATED PRESS

During a capital fundraising round earlier this year, visual bookmarking site Pinterest Inc. told potential investors that its internal forecasts included possible revenue of $3 billion in 2018, up from less than $25 million in 2014. The figure was cited in an offering document the Journal reviewed.

The document didn’t define “revenue,” and Pinterest declines to comment. According to the document, the projection was based on user growth trends, Pinterest’s ad pipeline and other factors.

In March, Pinterest, based in San Francisco, said it raised $367 million, giving the online site a value of $11 billion and more than doubling the previous valuation of $5 billion in 2014.

Venture-capital firm Andreessen Horowitz, an investor in Pinterest, said in a blog post last year that using traditional revenue gauges for some software firms “can lead to bad investment decisions” because investors ignore other metrics that might be “good indicators of financial health.”

Barrett Daniels, managing partner of Nextstep Advisory Services LLC, an accounting consultant to tech startups, says many of them emphasize nontraditional numbers until they have no choice. Companies often stop using the term “bookings” before going public. “Everyone loves that business metric except the SEC,” he says, adding that it is “easily inflated, and the auditors won’t review it.”

Jet.com Inc., a members-only online shopping club in Hoboken, N.J., that hasn’t opened for business, is valued at nearly $600 million based on a round of financing announced in February.

In April, Jet projected that the value of “gross sales” made through the website would reach $20 billion by 2020, according to a presentation from an investor meeting reviewed by the Journal.

Scott Hilton, Jet’s chief revenue officer, told investors that the estimate was “very conservative,” adding that roughly 420,000 people had signed up for a trial version of Jet’s service.

Jet founder and CEO Marc Lore says in an interview that the $20 billion target is an internal projection that Jet wanted to show investors. The number is based partly on data from his former company, Diapers.com parent Quidsi Inc., which Amazon.com Inc. bought for about $550 million.

He says Jet investors are taking a fair risk for the potential reward if the company takes off. “Nobody is making investments based on a guarantee of making these numbers,” Mr. Lore says.