By ANNAMARIA ANDRIOTIS at The Wall Street Journal

A decade after homeowners used rising property values to go on a borrowing binge, some of the nation’s largest banks are facing yet another hangover.

Borrowers who took out home-equity lines of credit, or Helocs, when real-estate prices were near their peak a decade ago are now falling behind as principal finally comes due after years of interest-only payments.

Data provided to The Wall Street Journal by Equifax, a credit-reporting firm based in Atlanta, shows that borrowers who signed up for Helocs in 2004 were 30 or more days late on $1.8 billion worth of outstanding balances just four months after principal payments started kicking in.

That represents 4.3% of the balance on outstanding 2004 Helocs, according to Equifax—a sharp rise from the 2.7% delinquency rate on those same Helocs one month before borrowers reached the end of the interest-only period, which typically lasts for 10 years after homeowners open a Heloc.

If Your Heloc Payment Is About to Jump
How to Tally the Rising Problem for Banks
With a Heloc, consumers borrow against the equity they have in a home. Borrowers can draw on the home-equity line for a set period during which in most cases, they are required to pay a minimum of only interest. After that borrowing period ends, the consumer has to pay back the principal as well as make any interest payments.

Monthly payments can rise by hundreds or even thousands of dollars when the interest-only period ends.

“There are some early signs of choppy waters ahead,” said Dennis Carlson, deputy chief economist at Equifax.

The spike in late payments means that major Heloc lenders could be saddled with hundreds of millions of dollars in fresh losses tied to housing just as the U.S. market is showing signs of recovery.

It also underscores the challenges both lenders and consumers still face in overcoming the severe setbacks they suffered in the financial crisis. Helocs were a popular source of cash for homeowners before the crisis hit.

Still, Helocs account for a relatively small share of lenders’ exposure to the housing market. Lenders carried $536.9 billion in Heloc balances at the end of last year, compared with $1.8 trillion in traditional mortgages, according to Inside Mortgage Finance, a trade publication. 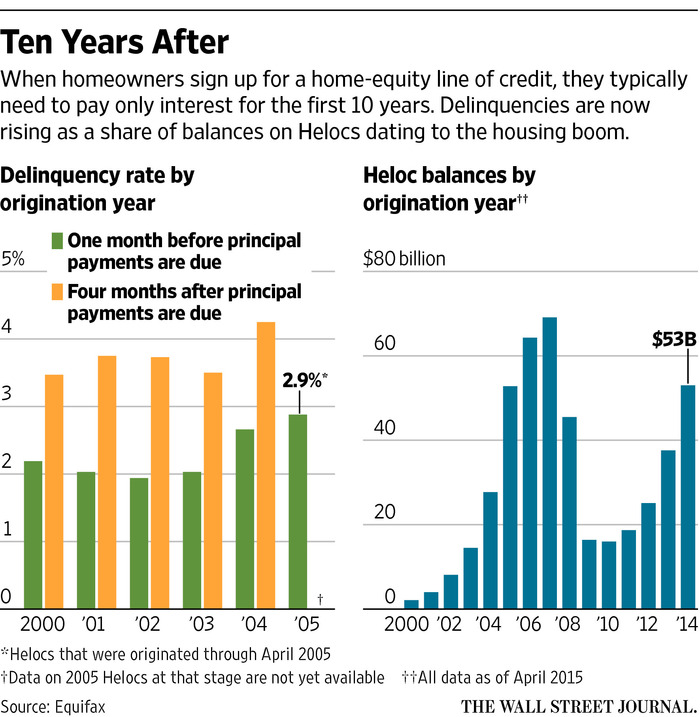 Banks usually hold Helocs on their books, rather than packaging and selling them off. That means the banks are more likely to bear the full brunt of any defaults, said Grant Bailey, a managing director in the residential-mortgage-backed-securities group at Fitch Ratings, a credit-rating firm.

The problems could soon get worse because more than 3.2 million Helocs that were originated between 2005 and 2007 were still held by homeowners as of April, many of which are still in the interest-only period, according to Equifax. The outstanding balance on those Helocs is $186.2 billion. 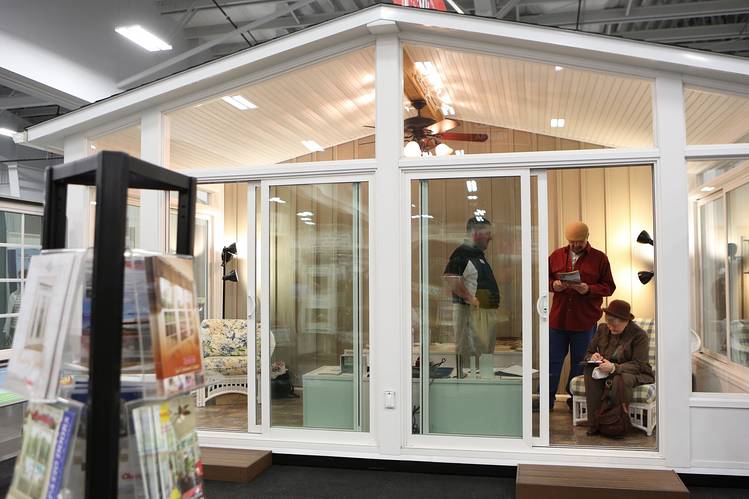 Above, a display at a Virginia home show in 2013. PHOTO: ELIJAH NOUVELAGE/THE FREE LANCE-STAR/ASSOCIATED PRESS

“We have been actively reviewing banks that have significant exposures to Helocs,” said Darrin Benhart, deputy comptroller for supervision risk management at the OCC, which oversees the nation’s largest banks.

At Citizens Financial Group Inc., $80.9 million of Helocs were 30 to 89 days past due at the end of the first quarter, up 16% from a year prior. A spokesman for the Providence, R.I.-based bank said Citizens began contacting borrowers in 2013 to inform them of their options and that a number refinanced or paid down their Helocs.

But there are limits to what banks can do. While many lenders allow borrowers to refinance into a new Heloc and start the interest-only period from scratch, that may not be an option for homeowners who owe more on their homes than they are worth, between the Heloc and the mortgage.

Bank of America reported in its filings that 17% of its outstanding home-equity balances, most of which are composed of Helocs, are tied to a house on which the borrowers owe more than it is worth, including the mortgage, the Heloc and other loans secured by the property. The bank began offering such borrowers the option to extend the repayment period from 15 to 25 years to lower their monthly payments and keep them current on repayment.

Citigroup said in a filing that the same is true for about $1.6 billion, or 13%, of its Helocs on which principal payments are due to kick in between the end of the first quarter and the end of 2017. The bank works with such borrowers individually and may defer interest on a portion of the principal until the end of the payback period, said a bank spokesman.

Lenders have shown renewed interest in Helocs in recent years.

Total home-equity lending, most of which is composed of Helocs, has risen two years in a row to reach $71 billion in 2014, according to Inside Mortgage Finance. While Heloc underwriting has tightened, the structure of most Helocs hasn’t changed since the housing market imploded, according to the publication.

A few lenders, however, are tightening standard repayment terms. Wells Fargo & Co., the largest mortgage originator in the U.S. by volume, in 2013 began requiring most borrowers to make principal and interest payments on their Helocs when they start withdrawing equity. Bank of America stopped giving out Helocs with interest-only payments earlier this year.