By MIKE CHERNEY at The Wall Street Journal 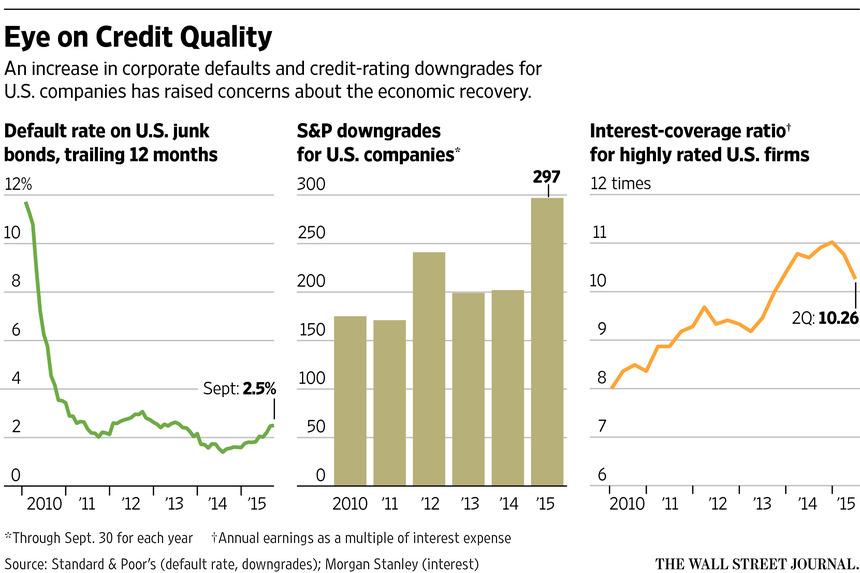 Falling profits and increased borrowing at U.S. companies are rattling debt markets, a sign the six-year-long economic recovery could be under threat.

Credit-rating firms are downgrading more U.S. companies than at any other time since the financial crisis, and measures of debt relative to cash flow are rising. Analysts expect profits at large companies to decline for a second straight quarter for the first time since 2009.

The softening U.S. corporate fundamentals have been largely overlooked as investors focused on sharp declines in the shares, bonds and currencies of many emerging-markets nations. Many analysts say the health of China remains the largest source of uncertainty in the global economy.

But rising downgrades and an increase in U.S. corporate defaults indicate “some cracks on the surface” of the domestic-growth outlook, said Jody Lurie, corporate credit analyst at financial-services firm Janney Montgomery Scott LLC. Many investors closely monitor debt-market trends as an indicator of U.S. economic health.

Bond prices for some U.S. companies have suffered. A 2024 McDonald’s Corp. bond dropped from about 104 cents on the dollar in April to about 99 cents in June after an S&P downgrade in May, according to MarketAxess data. 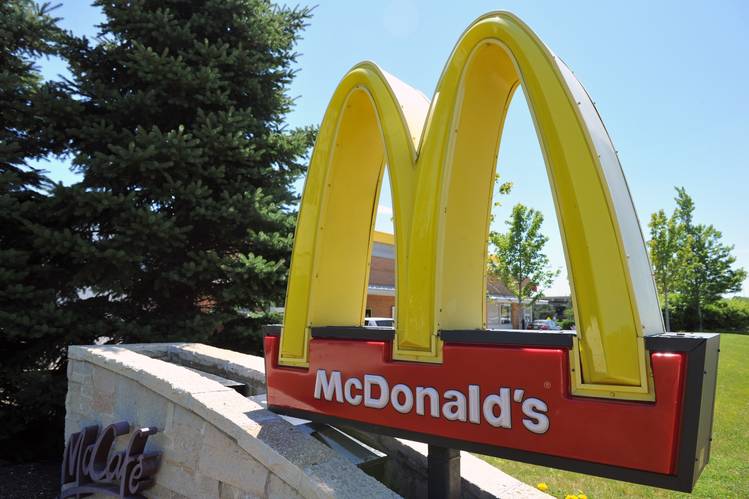 Bond prices for some U.S. companies have suffered. A 2024 McDonald’s Corp. bond dropped from about 104 cents on the dollar in April to about 99 cents in June after an S&P downgrade in May, according to MarketAxess data. PHOTO: MIRA OBERMAN/AGENCE FRANCE-PRESSE/GETTY IMAGES

In August and September, Moody’s Investors Service issued 108 credit-rating downgrades for U.S. nonfinancial companies, compared with just 40 upgrades. That’s the most downgrades in a two-month period since May and June 2009, the tail end of the last U.S. recession.

Standard & Poor’s Ratings Services downgraded U.S. companies 297 times in the first nine months of the year, the most downgrades since 2009, compared with just 172 upgrades. Meanwhile, the trailing 12-month default rate on lower-rated U.S. corporate bonds was 2.5% in September, up from 1.4% in July of last year, according to S&P.

About a third of the downgrades targeted oil and gas companies or firms in other commodity-linked industries, following a plunge in oil prices in the second half of 2014, said Diane Vazza, head of global fixed-income research at S&P.

Corporate finances are on the decline in other sectors, too. Wireless provider Sprint Corp., hotel and casino operator Wynn Resorts Ltd., insurance company Genworth Financial Inc. and pet-supplies company PetSmart Inc. were among the companies downgraded by S&P this year, highlighting the breadth of industries affected.

Those companies are in the junk category, meaning they are rated double-B-plus or below, but even higher-rated companies like McDonald’s Corp. and Mattel Inc. have been downgraded this year.

Bond prices have suffered. A Sprint bond maturing in 2025 fell from about 96 cents on the dollar to about 77 cents in September after Moody’s downgraded the company. A 2024 McDonald’s bond dropped from about 104 cents in April to about 99 cents in June after an S&P downgrade in May, according to MarketAxess data.

U.S. companies have increased borrowing to levels exceeding those just before the financial crisis, as firms pursue big acquisitions and seek to boost stock prices by buying back shares. According to one metric, the ratio of debt to earnings before interest, taxes, depreciation and amortization for companies that carry investment-grade ratings, meaning triple-B-minus or above, was 2.29 times in the second quarter. That’s higher than the 1.91 times in June 2007, just before the crisis, according to figures from Morgan Stanley.

“The metrics that you measure health and credit by have peaked a while ago,” said Sivan Mahadevan, head of credit strategy at Morgan Stanley. “They are beginning to deteriorate.”

Many investors and analysts say the concerns are overdone. They note that the U.S. economy is still expanding and that many large firms continue to raise money at historically low rates. They say the U.S. unemployment rate, which held at 5.1% in September, is the lowest since 2008, despite unease over slowing economic growth overseas.

While “there are some areas of weakness,” Ms. Lurie said, “there are many other points to show positive economic growth.”

Corporate finance chiefs have been willing to absorb downgrades because a stellar rating has become less important, with little price difference between some bonds with ratings a few notches apart. And until recently, companies had little trouble selling debt regardless of their rating.

But lately some companies, including the U.S. arm of Spanish bank Banco Santander SA, have had to pull bond deals and others, like chemical producer Olin Corp., had to pay higher interest rates than initially expected. Bankers lowered the price and increased the interest rate recently on a loan being sold to investors for insurance brokerage Integro Ltd., according to S&P Capital IQ LCD.

Another cause for concern: the earnings outlook is starting to dim, as slower growth in China and low commodity prices begin to hit firms’ revenue. In the third quarter, earnings for S&P 500 companies were expected to decline 5.1% over the same quarter last year, according to data as of Sept. 30 from FactSet. That follows an earnings decline of 0.7% in the second quarter compared with the year ago period.

Big U.S. companies with global footprints, like Caterpillar Inc., Monsanto Co. and Hewlett-Packard Co., have all announced layoffs in recent weeks. Analysts and investors say a strong U.S. dollar compared with currencies in other countries will hurt some U.S. companies’ revenues in the coming months.

Worries about companies’ financial health have pushed the difference in yield—called the spread—between corporate bonds and ultrasafe U.S. Treasurys to its highest level in more than three years, according to Barclays data. A bigger spread means investors want more interest relative to Treasurys to compensate them for the added risk of buying corporate bonds.

The spread for investment-grade firms recently hit 1.71 percentage points, up from 0.97 percentage point in July 2014, a move that analysts warn has foreshadowed broader economic troubles in the past.

“We are less dependent on global growth than many other developed countries, but we are not immune to the weakened economic fundamentals outside the United States,” said Gary Cloud, a portfolio manager who helps oversee the $463 million Hennessy Equity and Income Fund.