By Sam Ro at Yahoo

Almost all of the companies in the S&P 500 (^GSPC) have announced their quarterly earnings, and now Wall Street’s number crunchers are finalizing their conclusions as to what actually happened during the last three months of 2015.

Unfortunately, it’s become an increasingly challenging task to understand the true financial performance of the big publicly traded companies because of the widening of something called the “GAAP gap.”

Don’t worry: this topic isn’t as scary a concept as it sounds. In a nutshell, there’s a standard known as generally accepted accounting principles, or GAAP, which encourages some uniformity in how companies will report financial results. Unfortunately, the strict standards of GAAP often force companies to report big one-time, non-recurring items that will distort quarterly earnings, in turn making them a poor reflection of underlying operations. And so, many companies will make adjustments for these items and separately report adjusted or non-GAAP financial results. (Read more about it here and here.)

All of that’s well and good. But there’s an unsettling trend we’ve been witnessing: the gap between GAAP and non-GAAP numbers is widening. Specifically, this “GAAP gap” is widening in such a way that more and more costs and expenses are being removed to make underlying profits look higher. 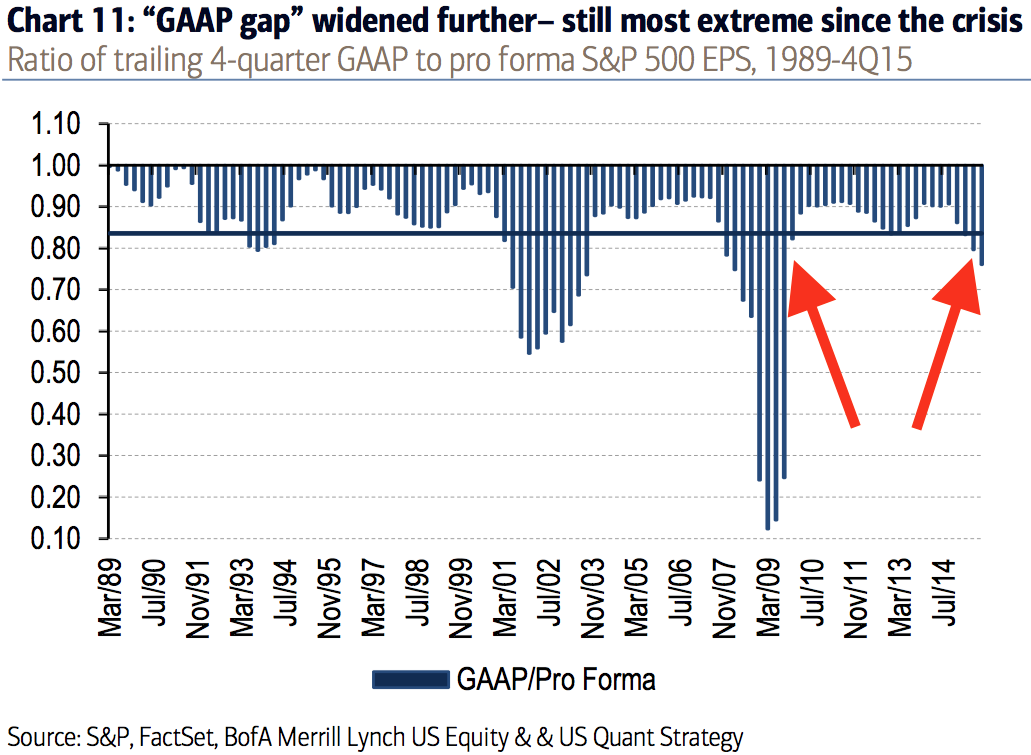 “The gap between GAAP (reported) and pro forma (adjusted) EPS continued to widen in 4Q, with the GAAP/Pro forma ratio of 0.74 still at its most extreme levels since 2009,” Bank of America Merrill Lynch’s Savita Subramanian said on Monday. “Trailing four-quarter (2015) GAAP EPS came in at $87 vs. $118 for pro forma EPS.”

It’s jarring to hear that any metric has returned to levels last seen during the financial crisis. Unfortunately, it’s hard to conclude what the implications are here because the issues are tied to just a few industries that are facing their own unique issues.

“As was the case last quarter, the chief contributor to “GAAP gap” has been Energy asset impairments/write-downs, followed by M&A costs within Health Care,” Subramanian continued. “The Energy sector alone contributed to nearly half of the “GAAP gap” this quarter.”

While this is certainly a top worth keeping an eye on, it would probably be a mistake to jump to any sweeping conclusions about the market and the economy.

“We found that while a widening GAAP gap is not a leading indicator of a market downturn, companies with increasing deviations tend to systematically underperform the market,” Subramanian said.

Source: Companies Haven’t Fudged Their Numbers This Much Since the Financial Crisis – Yahoo