Mind The JOLTS——There’s A Bearish Warning In There

Janet Yellen’s favorite labor market indicator, the JOLTS survey, showed record job openings and hires in June as the Wall Street Journal picked up on a theme that I pointed out months ago. The ratio of hires to job openings has been steadily falling. They attributed it to one of the causes I pointed out a year ago when I first featured this issue. That is that employers can’t find workers to fill the jobs they are offering because workers don’t have the skills employers need. However, the analysts the WSJ cited all felt that the growing number of job openings was a bullish sign.

The Journal failed to mention the other cause–that the jobs being offered are so crappy and so low paying, nobody wants to take them.  As I wrote a year ago and have alluded to frequently since:

… in spite of skyrocketing job openings, those jobs are not the kinds of jobs that real people, with their existing levels of skills, can fill, nor can they ever fill. There just aren’t that many rocket scientists and financial engineers available in the work force. Yes, that’s sarcasm. The biggest increase in openings has been in low paid restaurant and hotel jobs, which is just as much a problem. The US economy is beset with a huge, multi directional skills mismatch.”

So the growing number of job openings is not a good thing. 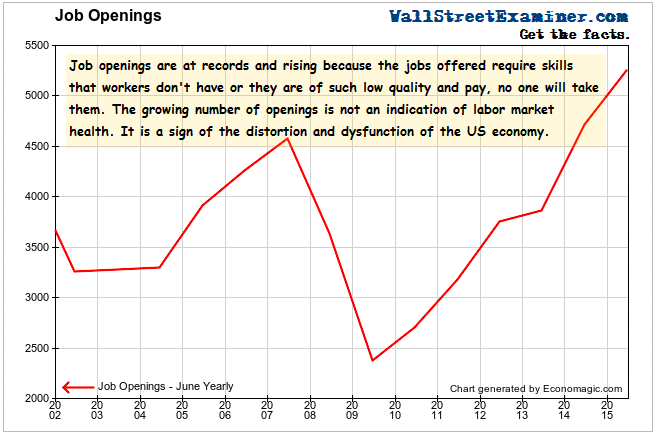 Another thing that the WSJ ignores is that the number of job openings is rising BECAUSE of these factors. An increase in the number of openings of menial, low paying jobs is therefore meaningless. Job openings will continue to grow and the ratio of hires to openings will continue to fall endlessly under these conditions because the vast majority of jobs being offered can’t be filled and won’t be filled. They’re either not real jobs because nobody has the skills to fill them, or they’re not real because they don’t pay a living wage. Or maybe they’re just not real job postings, period.

So the ratio of hires to openings just keeps falling.

In looking through the data I noticed something else that the lazy, Wall Street captured, mainstream media PR flacks either under report or misreport. That is the number of layoffs and firings, which are also included in this survey. The WSJ reported this number only on a seasonally adjusted basis, which is an abstraction, not the actual number. Just the same, here’s how the WSJ PR person put it:

“Another 1.79 million people were laid off or discharged in June, down from 1.66 million in May.”

Oops. I guess down is up.

I plotted the number of layoffs on an actual, not seasonally adjusted, yearly basis on an inverse scale to see if there was a correlation with stock prices. Lo and behold there was! Do you see what I see? 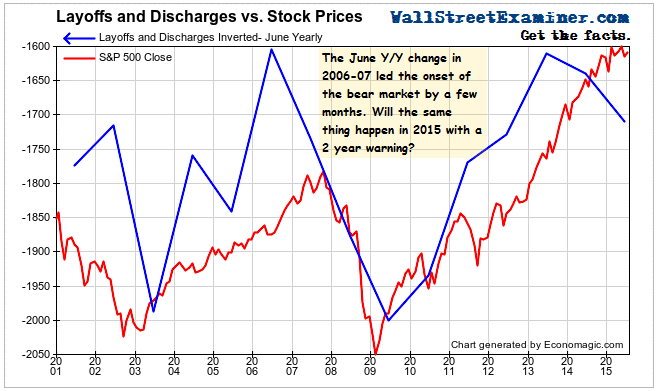 Layoffs increased from from 1.64 million in June of last year to 1.71 million in June of this year. In case you’re wondering, June was not a one trick pony. Every month this year saw more layoffs than the corresponding month a year ago. Why is nobody reporting that, or why, as the WSJ did, are they misreporting it?

With that plotted on an inverse scale with stock prices we see that layoffs also increased between June of 2006 and June of 2007, just before stock prices turned down. With the reporting lag the information wasn’t available to August, but there was still time to get out. Will 2015 see a repeat performance of layoffs as a leading indicator for a bear market? I would not bet against it.

The post Analysts Get It Wrong As WSJ Pooh Poohs The Negatives on JOLTs appeared first on The Wall Street Examiner. Follow the money! See and understand the liquidity flowing from the Fed, Treasury, and other major central banks and primary dealers as they impact markets in the Wall Street Examiner Professional Edition.