It’s a busy night in AsiaPac. The ubiquitous Japanese stock buying-panic at the open quickly faded. China weakened the Yuan fix quite notably and injected another CNY10bn of liquidity but news of the arrest of the President of China’s 3rd largest bank and a graft investigation into Dongfeng Motor’s general manager sparked greater uncertainty and Chinese stocks extended the losses from yesterday. Commodities had started to creep lower, with Dalian Iron Ore pushing 2-month lows with its biggest daily drop in 3 months, were extended when the Aussie central bank kept rates steady (as expected) butsparked turmoil in FX markets with forward guidance of th epotential for more easing.

The president of China’s third-largest bank has been detained, local media reported on Monday — the most senior bank official to be swept up in President Xi Jinping’s sweeping anti-corruption campaign.

Zhang Yun, president, vice-chairman, and deputy Communist party secretary of Agricultural Bank of China had been “taken away to assist an investigation”, Sina Finance and QQ Finance reported, using a known euphemism for corruption arrests. QQ cited an AgBank employee saying that Mr Zhang had been arrested on Friday and that executives had held a meeting late into the night to discuss a response.

Mr Zhang is the most senior banker to be ensnared in China’s anti-corruption probe.

In January, then-president of midsized Minsheng Bank, Mao Xiaofeng, was arrested in an investigation linked to a top aide to former president Hu Jintao. Days later Lu Xiaofeng, a board member at Bank of Beijing, was also arrested.

Local media also reported on Monday that a famous hedge fund manager was under arrest for insider trading.

A general manager of China’s Dongfeng Motor Group is being investigated for suspected corruption, the country’s graft watchdog said on Monday.

Zhu Fushou was being investigated for “suspected severe violation of discipline”, the Central Commission for Discipline Inspection (CCDI) said in a statement on its website. Discipline violations generally refer to corruption. 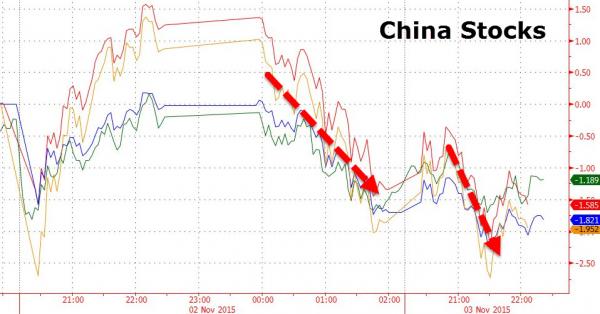 China is in big trouble…

And then RBA decides, as economists expected, not to cut rates 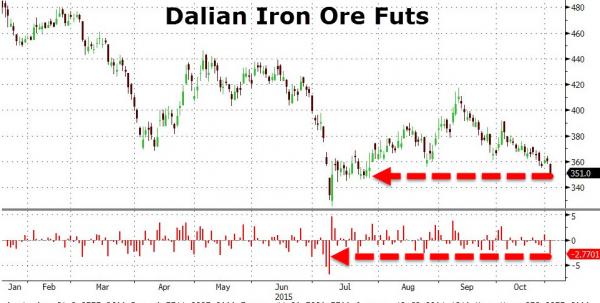 But of course fed the crowd some forward guidance hope: 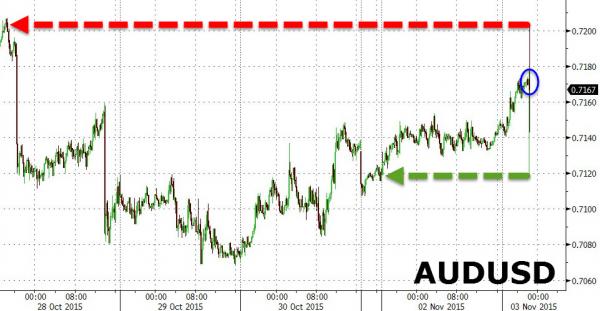 One wonders who knew what early? Just like last time (and will the regulators get involved again)

And US equity futures are drifting lower as USDJPY rolls over and Apple fears rise on Pegatron hiring freeze... 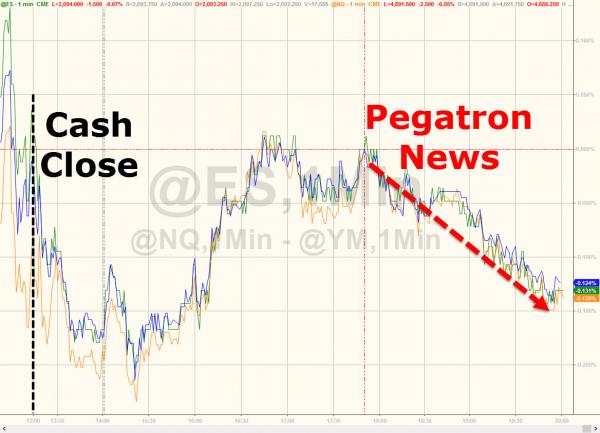