By SPENCER JAKAB at The Wall Street Journal

U.S. auto sales, due Tuesday, are set for their biggest year-over-year drop since the financial crisis. But this isn’t a reason to panic.

Neither stock-market jitters nor interest rates are at fault. Instead, blame Grover Cleveland. The former U.S. president decided to commemorate Labor Day on the first Monday in September rather than May 1, like most other countries. This year, that pushed the celebration to Sept. 7. And since Americans commemorate workers’ rights by grilling meat and buying cars, the latter has been pushed into another month and will flatter September sales figures, according to Edmunds.com. (Earlier Labor Day weekends are lumped into August by the industry).

But while that is merely a calendar blip, there is an actual reason to be concerned about the trajectory of new-car sales. Analysts at Edmunds.com estimate that around 28% of new vehicles this year will be leased—a near-record pace.

Once a lease is finished, the vehicles tend to be three years old, dealer-certified and in good enough shape to compete with new vehicles. Counting this year’s forecast, the past three years will have seen a total of 13.4 million vehicles leased. That compares with just seven million in the three years ended in 2011.

In addition to competing with new offerings, that creates an additional potential problem for auto makers. Leasing may not be cheaper, but it is more affordable—not a contradiction in terms. 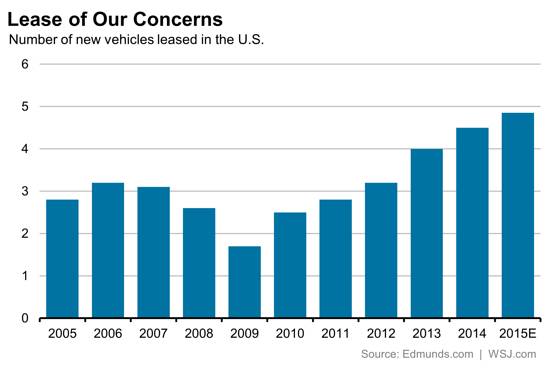 Consumers focused on the dollar amount of their monthly payment have taken advantage of low interest rates to sometimes buy more car than they might otherwise be able to afford. But, aside from the actual cost of the vehicle, rates are only part of the equation determining monthly payments. The other is what auto makers and their financing arms think the residual value will be once a typical 36-month lease is up.

Those values surged after the financial crisis. Now, a surfeit of off-lease vehicles is starting to depress prices, particularly for expensive vehicles. Three-year old, used premium luxury-car prices are down by nearly 7% from a year ago, according to Edmunds.com data. Along with Fed interest-rate increases, that would make leases less of a bargain and used cars more attractive.

That new-car smell may soon involve more of a splurge.