By Victor Reklaitis at MarketWatch

Watch out because a key stock benchmark is close to a “bearish crossover,” warn chart watchers.

There have been just two other such crossovers in the last 22 years, and “both coincided with cyclical bear markets,” cautions Krinsky, MKM’s chief market technician. His note offers the chart below. 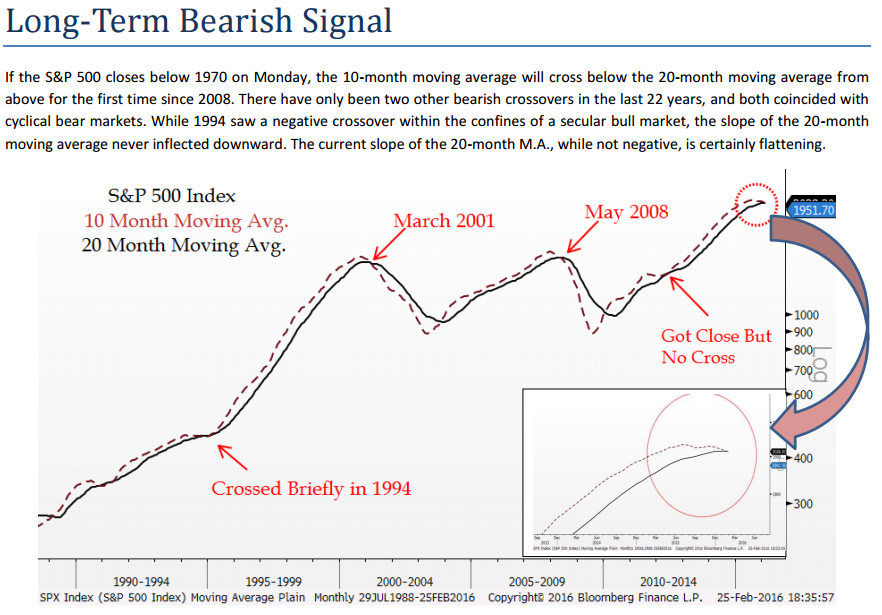 While the S&P has nabbed two weekly advances in a row and may end with a gain for February, Krinsky writes that he doesn’t think the U.S. stock benchmark is in “a sustainable uptrend” in part because of the bearish crossover that’s close to occurring.

The crossover will have happened if the S&P ends Monday’s session below 1,970, Krinksy adds. The index closed at 1,948.05 on Friday.

720 Global’s Michael Lebowitz flagged the looming bearish crossover as well. “If history proves prophetic, buckle up,” Lebowitz writes, as noted in MarketWatch’s Need to Know column. “Stock prices may be in for a precipitous decline.”

Source: The S&P 500 is Close to Flashing a Bearish Signal it Hasn’t Displayed Since 2008 – MarketWatch