Earlier today, we noted that while the market was surging last week, the smart money was selling. This comes at the same time as ICI reported major redemptions from both stock ($3.9 billion) and bond ($4.5 billion) mutual funds, even as corporate buybacks were decelerating, leading to the question of just who was buying stocks during the Santa rally of the past two weeks.

But something even more surprising emerged when looking at the detailed breakdown of how the “smart money” has been flowing. As Bank of America clarifies, when explaining where its $0.7 billion in weekly outflows came from, “net sales were chiefly due to institutional clients last week” and adds that institutionals “have sold stocks for eight consecutive weeks”!

And then something even more surprising emerges when looking at the YTD breakdown of flows: while hedge funds and private clients (retail) have largely offset each other over the past year, the former selling $2.8BN and the latter buying $2.2BN in 2015, something odd has taken place at the institutional level: starting in early January, the largest financial institutions – mutual funds and various other asset managers – have unleashed an unprecedented selling spree for 11 consecutive months, which has brought their total outflow to $26.8 billion.

Which leads to another question: if institutions are actively dumping stocks, perhaps mom and pop investors should show the following chart to their financial advisors, who directly or indirectly work for these institutions, and ask them: why should they be buying, when the counterparty they are buying from is, most likely, this very same financial advisor? 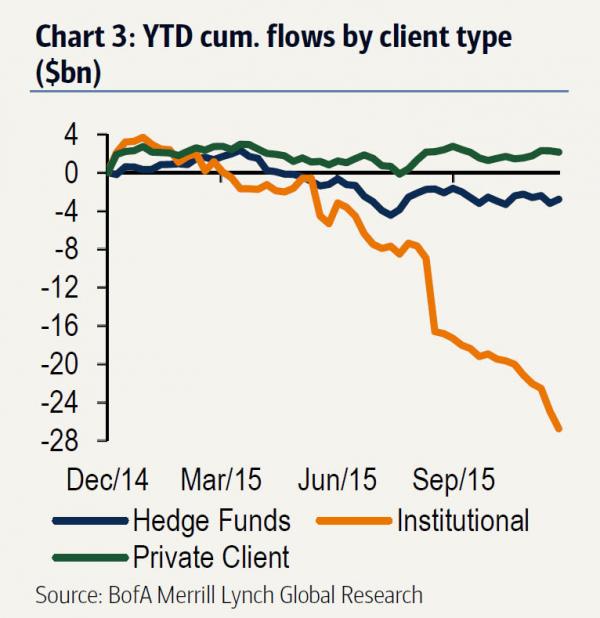 It isn’t just 2015: as BofA adds, and shows in the next chart “institutional clients overall were only net buyers in 2009, as well as in 2011.” They were net sellers all the other time as the green line clearly shows.

Finally, here is the full breakdown of what all of Bank of America’s clients have done since the start of the recession: it is almost as if they have all been… selling? 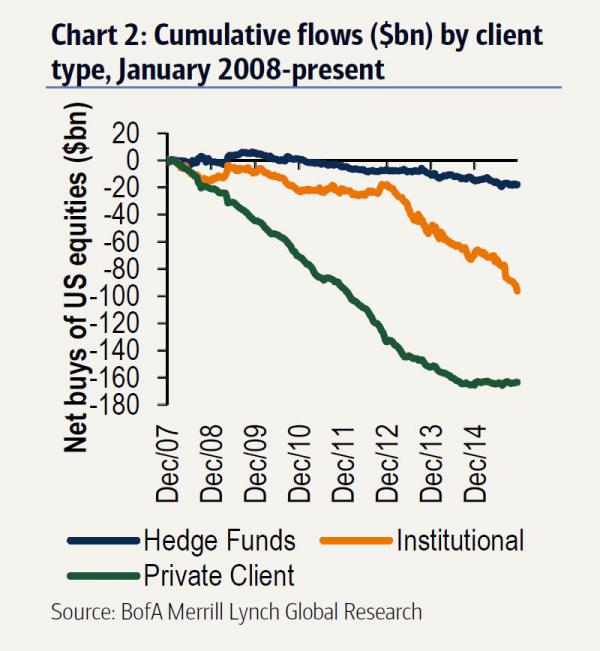 Just who is the greater fool?

Source: The Next Time Your Financial Advisor Tells You to Buy Stocks, Show Them This Chart – ZeroHedge