From The Wall Street Journal

American households across the wealth spectrum increasingly face sharp swings in monthly income and spending, a finding that underscores the unpredictability that has become a hallmark of the U.S. labor market since the recession.

A J.P. Morgan Chase & Co. analysis of 100,000 of the bank’s customers found a large and diverse share of Americans with incomes that vary by more than 30% from one month to the next. The study, set for release Wednesday, also found the bottom 80% of households by income lack sufficient savings to cover the type of volatility observed in income and spending.

Income volatility “is not just a poor person’s problem,” said Diana Farrell, chief executive of the J.P. Morgan Chase Institute, a new group formed by the bank. “This is a middle-income problem.”

In drawing attention to monthly income swings, the research shows a broader challenge for the economy: Insecurity isn’t driven just by unexpected events like losing a job. Instead, volatility has become “a normal part of a lot of folks’ lives given the way we’re earning today. Households are scrambling,” said Jonathan Morduch, an economist at New York University who has done extensive research on the issue.

A growing body of work has found significant volatility in household earnings as more people piece together income from multiple sources and face unpredictable hours, trends on the rise since the recession.

A 2012 paper from economists Karen Dynan, Douglas Elmendorf and Daniel Sichel found the share of households that had experienced a 50% drop in income over a two-year period rose to around 12% in the early 2000s from 7% in the early 1970s. The proportion was 10% before the 2008 financial crisis.

The recession exacerbated the income insecurity. Some 18% of families reported their actual income was temporarily below their usual income in 2013, according to a Federal Reserve study published last year. That was down from 25% in 2010, but up from 14% before the recession hit in 2007.

Stagnant wages have added to the problem. Incomes rose 22% for the average household from 1979 to 1999, according to the Pew Charitable Trusts, fueling swift gains in consumption that masked growing volatility. Incomes grew just 2% from 1999 to 2009, and have been flat since then for most workers.

Additionally, around 7.1 million Americans, or nearly 5% of the workforce, held multiple jobs in April. Meanwhile, some 6.6 million Americans had part-time jobs but wanted full-time work. While that is down from more than 9 million in 2009, it is still more than 40% above the pre-recession level.

J.P. Morgan’s inaugural report from its new in-house data lab is one of the first to examine month-to-month swings in both income and consumption, drawing on detailed account information from a sample of 2.5 million account holders. 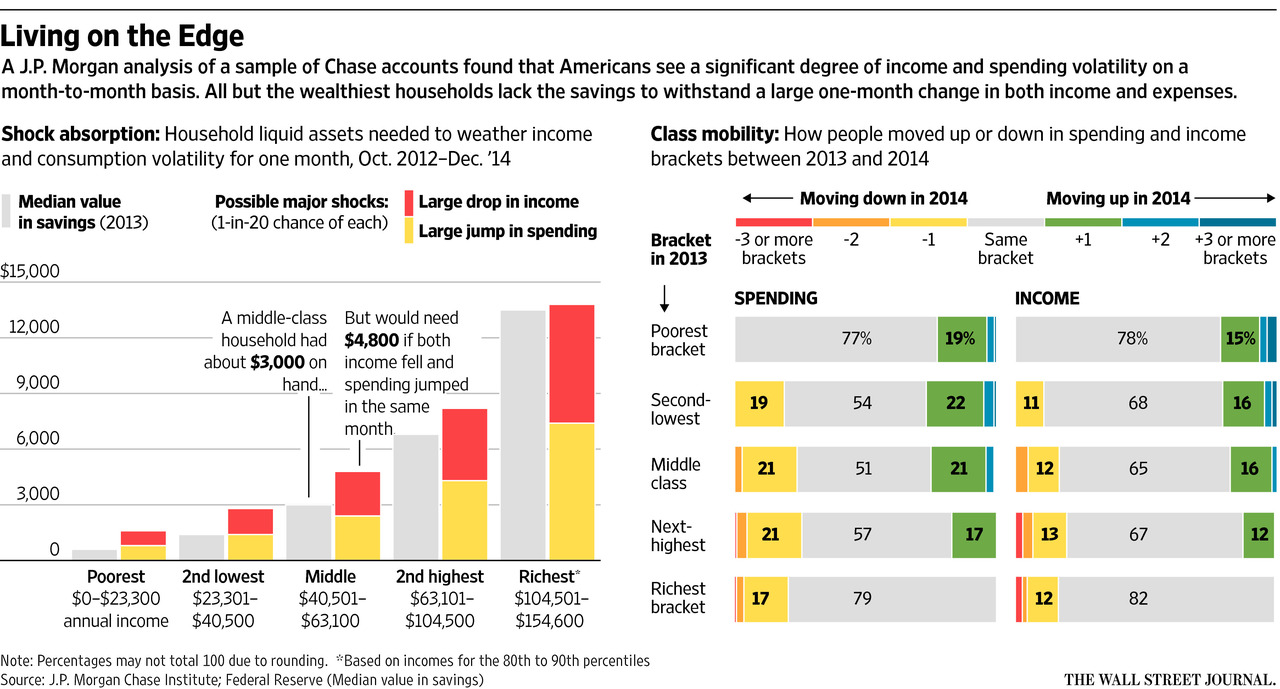 The study shows consumer spending tends to be more volatile than income. While 2 in 5 individuals saw their incomes rise or fall by 30% from one month to another, 3 of 5 saw their spending vary by a similar amount.

Moreover, income and spending swings don’t generally move in the same direction, leaving households in trouble if they don’t have enough of a buffer to handle a shock in both during the same month.

For example, the typical middle-income household has around $3,000 in savings, but would need $4,800 to handle a shock to income, such as a month of unpaid job leave, together with a large medical or tuition bill in the same month, the report said.

The findings aren’t surprising to Americans like John Whitman, who has been looking for work for parts of the past two years. Until March, Mr. Whitman spent seven months on commission selling light-duty trucks to contractors and other businesses at an auto dealership in Akron, Ohio. He said he left that position because sales weren’t strong.

“Pay was all over the board,” he said. “There wasn’t any consistency to it.” Mr. Whitman said he has faced hefty tax penalties by withdrawing from his retirement accounts early.

Still, the 58-year-old said he is grateful his wife has a steady job working for a business-promotions company and said her income is up around 10% from the early 2000s. His paycheck, on the other hand, has been down by half at times since 2003, when he sold a commercial construction distribution company that he had grown over 20 years, steadily increasing his pay along the way.

The J.P. Morgan report comes on the heels of research published in March by U.S. Financial Diaries, a collaboration between NYU and the Center for Financial Services Innovation, which conducted an in-depth study of 235 low- and moderate-income families.

Greater income volatility has important ramifications for the broader economy. In the mortgage market, for example, lenders face new rules requiring them to verify a borrower’s ability to repay a loan, which can lead them to exclude unstable sources of income. The combination of weak income and tight credit is one reason the homeownership rate has fallen to its lowest levels since the early 1990s.

The volatility also highlights the need for more attention to short-term savings, or “rainy day” accounts, as opposed to a more traditional focus on longer-term savings for college, housing and retirement.

“We often think of lower-income households as fundamentally insolvent,” said Mr. Morduch. The latest research suggests “they may have the money, but they don’t have it at the right times.”