More Nonsensical Noise From The BLS

Last week we looked at Janet Yellen’s favorite indicator, the JOLTS, or Job Openings and Labor Turnover Survey. As I looked into the data, I noticed something strange. The number of hires each month was always greater than the number of job openings. So I had two questions for the Bureau of Liar Statistics. 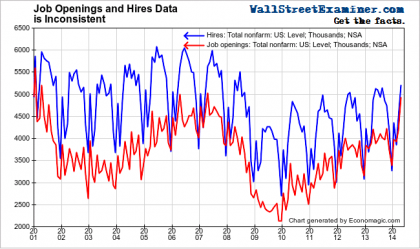 First, how is that possible? Second, why did job openings spike in April and hires didn’t? Nothing remotely close to that has occurred in the 13 year history of this data. In fact, the opposite condition, where hires spike and openings don’t, is common. A spike in openings without an equal or greater spike in hires is unheard of.

What’s not understandable is that such an extreme spike in job openings would not see at least a somewhat similar move in hirings. It suggests one of two things. Either this was a data error, or these were rocket scientist/financial engineer job openings and the employers couldn’t find enough rocket scientists to fill them.

What do you think?