Reports of the pending collapse of China property bubble have circulated for years, including some on this blog. To date, each slowdown was soon followed by another boom to still higher prices. Here we are again, in another slowdown. 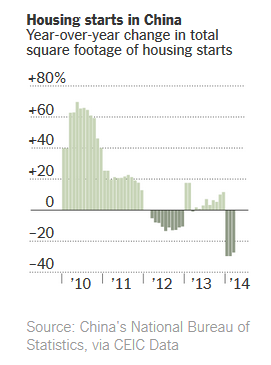 After almost two decades of nearly unceasing increases in real estate prices and construction across China, one of the world’s longest-running bull markets finally seems to be stalling, with broad consequences for the country’s economy and possibly its politics.

Prices are falling for both new and old apartments. The volume of deals is drying up. And developers are pulling back, furloughing workers and delaying new projects. In the latest sign, housing starts plummeted 25 percent in April from a year ago, the Chinese government announced on Tuesday.

“You can’t predict how the bursting of a Chinese real estate bubble plays out because it plays out in very small steps,” said Joel H. Rothstein, a partner in the Beijing office of the Paul Hastings law firm who specializes in Asian real estate.

China’s real estate market correction — some economists are even calling it the popping of a bubble — is partly the result of a deliberate decision by the country’s leaders in Beijing.

Economic data released on Tuesday also included a deceleration in industrial production, with growth in steel and cement output slowing to a crawl. Retail sales also grew more slowly than expected in April, and the furniture market stalled as fewer families moved into new homes.

According to Centaline, one of China’s largest real estate brokerage firms, transactions over the May 1 holiday weekend fell by half in Beijing and Shanghai from a year ago. The weekend is traditionally one of the two biggest real estate buying times of the year, along with a weeklong national holiday at the start of October.

A national survey released in March by the Southwestern University of Finance and Economics in Chengdu, China, found that households across the country had 66 percent of their assets in their homes, a figure that rises to 84 percent in Beijing. The comparable figure for the United States, where stocks and bonds are more popular, is 41 percent.

In its May Financial Stability Report, the Reserve Bank of New Zealand warns about financial vulnerabilities in China.

There is a risk of a disorderly correction to the lending and property boom in China, resulting in a sharp slowing in Chinese growth. The unregulated shadow banking sector has played a strong role in the recent credit boom, with the share of credit growth financed by the sector rising from 11 percent in 2006 to 32 percent in 2013. Much of this credit has been lent to the increasingly indebted local government sector, to fund property development and infrastructure investments. Moreover, the flow of funding to the shadow banking sector may not adequately reflect the risks involved: some shadow banking products are distributed by banks, potentially creating a perception that they are implicitly guaranteed.

In the past few years, predictions that the sector was about to implode at any moment have not been borne out – but now is the time for the world to pay attention. Property activity indicators have been trending lower since mid-2013, and the downturn in the sector now threatens to turn into a bust. At best, China is entering a deflationary phase at a time of global fragility.

The greater risk to China lies in the pervasive consequences of any property bust. Property investment has grown to account for about 13 per cent of gross domestic product, roughly double the US share at the height of the bubble in 2007. Add related sectors, such as steel, cement and other construction materials, and the figure is closer to 16 per cent.

As the property slowdown has kicked in, housing starts, completions and sales have turned markedly lower, especially outside the principal cities. Inventories of unsold homes in Beijing are reported to have risen from seven to 12 months’ supply in the year to April. But when it comes to homes under construction and total sales, the bulk is in “tier two” cities, where the overhang of unsold homes has risen to about 15 months; and in tier three and four cities, where it is about 24 months.

The anti-corruption crackdown, often targeting individuals who have built up ostentatious property wealth, has poured cold water over the market, in which, according to a recent investment bank report, the richest 1 per cent of households is estimated to own about a third of residential property. Elsewhere, the tightening of credit terms, including funding costs for property developers, especially in the shadow banking sector, is taking its toll. Rates of return on commercial property and infrastructure, and cash flows for developers and local government, have been deteriorating.

The crunch in the property market, and for the economy, will come when land and property prices fall more broadly across the country. Official data still show that property prices in 70 cities were 8 per cent higher in March than a year ago – but prices have actually fallen since the end of 2013.

If this is the real deal, and I believe it is, China is going to slow much more than consensus opinion suggests. Imports and exports to and from all all countries that deal with China will slow, and China’s demand for copper, steel and other commodities will slow as well.