Morning After In The Shale Patch—-Oilfield Workers Getting Slammed

By Annamaria Andriotis at the Wall Street Journal

The slump in crude prices is starting to show up as missed payments by consumers in the oil patch.

In states from Oklahoma and Texas to North Dakota and Wyoming, rising unemployment in the energy sector is pushing up loan delinquencies and raising the risk of new losses for banks.

Wells Fargo & Co. this month reported an increase in borrowers falling behind on payments in areas including Houston and parts of Alaska. J.P. Morgan Chase & Co. said auto-loan delinquency rates picked up in some energy-related markets.

Overall, energy-dependent states are posting delinquency rates that in many cases exceed the national average, according to data prepared for The Wall Street Journal by credit bureau TransUnion.

“In these energy states, we are clearly seeing the impact of the loss of oil jobs,” said Ezra Becker, senior vice president and head of research at TransUnion. “We don’t expect to see any kind of material improvement in the short term.”

Some 119,600 oil and gas jobs nationwide have been eliminated—22% of the total—since September 2014, according to the Federal Reserve Bank of Dallas. The price of U.S.-traded oil, while on the rise this year, has dropped 28% since June. Some analysts have warned that persistent crude oversupply could prevent further price gains.

Car loans and credit cards have been affected the most, and there are some early signs of delinquency-rate increases in borrowers who can’t make mortgage payments. Moody’s Investors Service said the share of borrowers in oil-focused areas falling 30 days behind on a pool of Freddie Mac mortgages, while low at 0.38% in December, began to exceed the average elsewhere in the country last summer. The average for other areas was 0.29% in December.

A Freddie Mac spokesman said the company doesn’t publicly report 30-day delinquencies, but said its national delinquency rate for mortgages that are 90 days or more past due has been on a steady downward trend.

Declining oil prices overall have been a boon to consumers—and their lenders—in most other parts of the country, where they are paying less at the pump and have more cash to spend or pay down debts.

But the uptick in late payments is a blemish on what has been a strong run for consumer credit, adding another measure of pain for banks already struggling with souring loans to oil and gas drillers. Some of the hardest hit states—Wyoming, Oklahoma and North Dakota—have had unemployment rates rise in March from the year-ago month, while the national average has declined, according to the Bureau of Labor Statistics.

While delinquency rates overall are still low, the regional trend risks hurting profits at smaller banks, potentially leading to tighter standards for loans like mortgages and home-equity lines of credit.

“Do I expect delinquencies to be on the rise? Absolutely,” said Doug Weedin, president of Pinnacle Bank-Wyoming, a community bank with about $710 million in assets, based in Cody.

Auto-loan delinquency rates at Pinnacle Bank jumped to just over 1% of outstanding loan dollars in the fourth quarter of 2015 from 0.1% in the year-ago period, according to data provider S&P Global Market Intelligence. Delinquencies could rise given the large number of layoffs in Pinnacle’s region over the past two months that Mr. Weedin said aren’t reflected in the latest data. 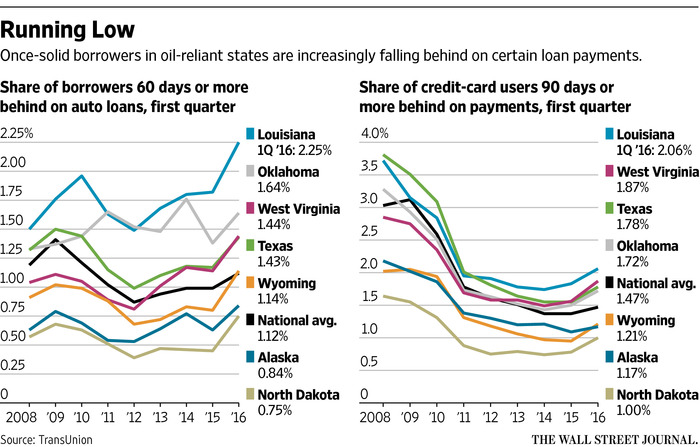 Wyoming’s oil, gas and mining industries account for roughly 70% of the state’s revenue, according to the governor’s office. There were an estimated 10,200 workers employed in oil and gas extraction and support jobs as of March, down 25% from a year ago, according to the state’s Department of Workforce Services.

On Tuesday, crude for June delivery gained $1.40, or 3.3%, to $44.04 a barrel on the New York Mercantile Exchange, its highest settlement price since November.

The concerns about loan performance in energy markets is a turnaround for regions that were considered to be among the safest for consumer lending. Borrowers in many of these areas weathered the recession relatively well. Yet as oil prices remain at low levels and companies lay off employees, more oil workers are finding themselves out of a job and unable to pay bills.

Mary Dominguez, 53 years old, lost her job in December as an administrative assistant in Odessa, Texas, at a company that provides maintenance and other services to oil companies. She has since fallen behind on her car-loan payments and is avoiding calls from her lender. Instead of paying her credit-card bills in full each month, she is paying only the minimum and is carrying a balance of about $3,500, she said.

In Oklahoma and Texas, 1.7% and 1.8% of credit-card users, respectively, were at least 90 days behind on payments in the first quarter, an increase of about 0.22 percentage point from a year earlier, according to TransUnion. Credit-card delinquency rates in both states have been rising at about twice the rate of the U.S. as a whole, TransUnion said.

In North Dakota—where delinquencies have been among the lowest nationwide—missed payments on car loans are rising even faster than in Texas and Oklahoma, according to TransUnion.

Credit-card and auto-loan delinquencies in most energy-dependent states are still low, ranging between 1% and 2%.

In some cases, unemployment has spilled over into other sectors. Oklahoma City’s public school district said last month that it would lay off more than 200 teachers due to lower-than-expected tax revenue. About 100 schools in the state have moved or are in the process of moving to a four-day week to save money. In February, a hospital in Sayre, Okla., shut down, with falling oil revenue as a contributor to its financial strain.

“Job losses have been fairly significant,” said Michael Plante, senior research economist at the Dallas Fed. “We have seen signs that broader economic activity has been impacted by the slowdown.”

Large banks have responded to the rise in delinquencies in energy-focused states by tightening mortgage standards, including requiring larger down payments on home loans. Wells Fargo said it was less likely to give out mortgages with high loan balances relative to the value of the home in some oil-reliant areas. J.P. Morgan Chase lowered loan-to-value ratios earlier this year in Houston for homeowners seeking to withdraw cash from their homes while refinancing.

Capital One Financial Corp. Chief Executive Richard Fairbank reported small increases in credit-card delinquencies in Houston and parts of North Dakota in January and said the bank had made changes to its underwriting in those areas.

Foreclosure activity is starting to rise in some states. For Oklahoma, March was the seventh straight month of year-over-year increases in foreclosure starts, when borrowers stop making payments and banks begin the foreclosure process, according to real-estate data company RealtyTrac.