It appears Swedish banks are falling over themselves to get rid of excess cash. We noted Swedish banks refusing to open bank accounts in September, and warned in October of a “giant wave of money” heading into Sweden thanks to the Riksbank-ECB policy divergence, and now,Swedish banks are paying each other to take cash off their balance sheets into year-end, as 1-week STIBOR crashes to -1.792%.

In other words, “reverse window-dressing” as no one wants to show a negative carry asset on their balance sheet. 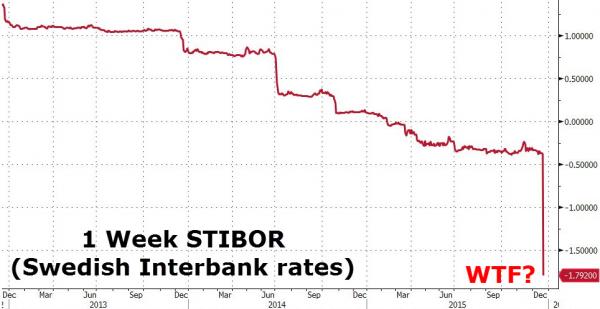 It is clear that SHB has the most “excess cash” to dump… willing to pay a massive 5.05% to someone to “take my money”

Or put another way…

It is these kind of nonsense disclocations that extreme monetary policy-makers create with their unintended consequences. As we previously concluded,

And so, we’re now beginning to see the results of the beggar-thy-neighbor monetary insanity that grips DM central banks. It’s a never-ending race to the bottom and now that everyone is moving further and further into NIRP, it’s not even clear that there is a bottom. After all, even if negative rates finally do make their way to household deposits causing rational actors to simply withdraw their money, the monetary authorities can always just ban cash, which would effectively obliterate the idea of a “lower bound.”

In any event, perhaps the more pressing concern here is the combination of a massive housing bubble, NIRP, and a QE program that’s all but exhausted. As we noted last week when discussing Denmark, Copenhagen home prices are rising at 12% per year (or more) and yet the Danish central bank is operating on the assumption that headline inflation is half of 1%. Obviously that borders on the insane. Central banks are deliberately ignoring a sure sign of inflation on the way to citing disinflation as an excuse for doubling, tripling, and quadrupling down on the same policies that have driven housing prices into the stratosphere.The question then becomes this: when these housing bubbles burst (and they will), how do central banks in Denmark, Sweden, and Norway intend to fight the ensuing deep recessions now that they’ve exhausted their counter-cyclical capacity?

Source: Something Crazy is Going On in Swedish Money Markets – ZeroHedge