The NAR reported the misnamed “Existing Home Sales” on Wednesday. Yes, they are existing homes. No, the data doesn’t report sales. The report shows prior sales contracts that closed during the month. The data should rightly be called, “Closings of Previously Sold Homes.” All parties to the sale, the buyer, the seller, and the agent recognize the contract as the sale. That’s when the SOLD sign goes up. The closing is a formality 95% of the time.

As the Wall Street Journal told us:

Home sales declined in April, a tepid start to a spring selling season marked by a dearth of homes available for purchase.

This spring selling season promises to be the most competitive in years, with a flood of new buyers entering the…

Wait a minute. A flood of new buyers entering the market? How do they know that? The article doesn’t say. I checked online broker Redfin’s Demand Index which measures buyer inquiries and offers. It showed sharp declines in demand in February and March. The Index was at 108 in March, down from 132 in January. That was better than March 2016, which was an extremely weak 94. But it was not materially better than a 107 reading in 2015 and was weaker than a 109 reading in 2013. Hardly a flood of new homebuyers.

Next I looked at the NAR’s actual, not seasonally manipulated data on closings  (or not seasonally adjusted–NSA–if you prefer) to get an idea of just how many sales went to closing during the month. To gauge that performance I compared the number with the April numbers for the previous 10 years.

This year’s April closings totaled 449,000. That was a decline of 6,000 units, or -1.5%, from March. That… NEVER… happens. Even during the housing crash, April never saw a decline. The previous worst April had a gain of 6,000 That was in April of 2006 as the bubble was topping out. This was the first April decline in at least 11 years.

So this is serious weakness– not exactly the Journal’s “flood of homebuyers.” The Journal, and Wall Street pundits in general, blame record low inventory for the lack of sales. But inventory has been extremely low for the past 4 years. Why would that constrain demand this year more than in 2013-16?

Nowhere did I see any mention of the fact that buyers, might–just might–be tapped out. That’s been my guess for the past several months. Sale prices keep inflating faster than buyer incomes, and mortgage rates have upticked since last fall. Ergo, fewer potential buyers can step up to the plate as prices keep rising. Where do we see that thought in the mainstream media?

Maybe part of the problem is that the Wall Street Journal is the public relations arm of the National Association of Realtors (NAR). You know what I’m talking about if you’ve read my reports on this subject before. But if you’re new to these pages you’re probably thinking that this is hysterical hyperbole. Allow me to briefly connect the dots.

The Wall Street Journal is a subsidiary of Rupert Murdoch’s News Corp. News Corp. owns and operates Realtor.com, the direct sales online marketplace for the NAR. In addition, News Corp. also owns News America Marketing. Get that–NEWS America Marketing, whose slogan is “Your marketing objectives are our business.”

Since when are “news” and “marketing” related? Since Rupert Murdoch and other major entertainment and propaganda media moguls took control of the news media a few decades ago. It’s all about the marketing now. The Wall Street Journal even went so far as to offer buyouts to all its newsroom staff last year. I gather that the purpose was to replace them with PR drones.

Read the Journal piece on “Existing Home Sales” and you’ll see what I mean. The spinning and twisting to turn negatives into positives is laughable once you know the real facts.

Back to the data, using the magic of seasonal adjustment, the NAR reported that sales were up 1.6% year over year. The actual, not seasonally adjusted data showed a year to year decline of 4.5%. Total April closings were below not only last year, they were only tied with April 2015 and were below the April 2013 level. This is hardly a flood of buyers. It’s a market that’s dead in the water. 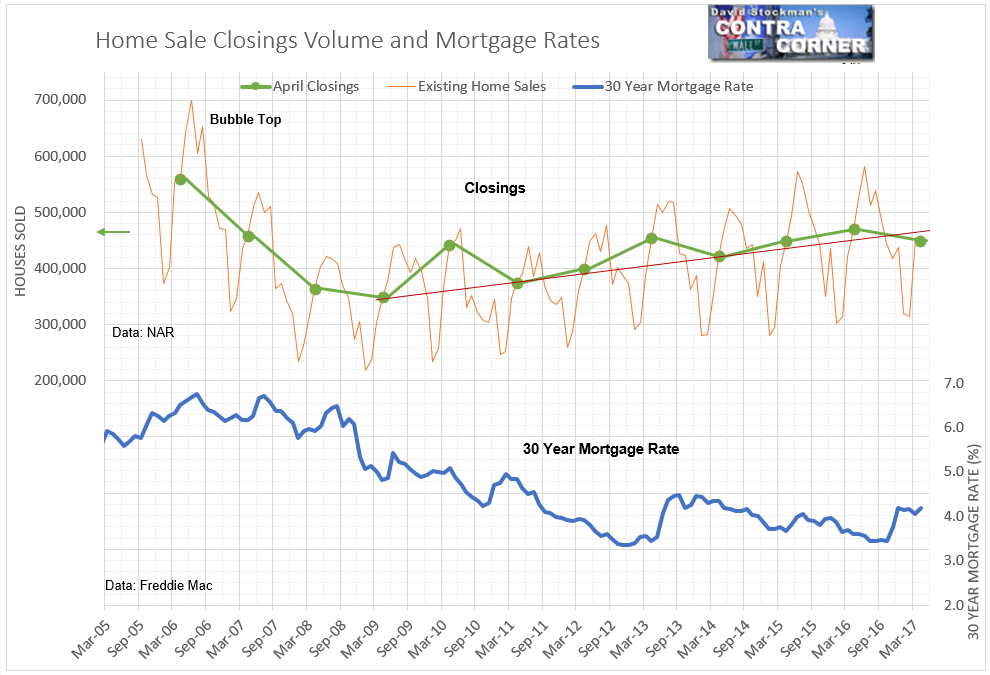 The trick that allowed the NAR to report a year to year gain was that seasonal adjustment added sales to April because it had one less business day than the typical April. An adjustment is justifiable, but the question is how much the adjustment should be. Nobody knows, so they make up  a number, possibly based on straight division.

I was in the real estate business. I’ve known title companies that used managers, or were open a few extra hours to hold a few extra closings on the last few days of the month when conditions demanded it. Most buyers and sellers who wanted to close by the end of a month would find a way to do so, and the title companies would find ways to accommodate them. Sure, some closings probably did leak into May because of the calendar. It’s unlikely that it would have been enough to turn a down month into a gain.