RBS has advised clients to brace for a “cataclysmic year” and a global deflationary crisis, warning that major stock markets could fall by a fifth and oil may plummet to $16 a barrel.

The bank’s credit team said markets are flashing stress alerts akin to the turbulent months before the Lehman crisis in 2008. “Sell everything except high quality bonds. This is about return of capital, not return on capital. In a crowded hall, exit doors are small,” it said in a client note.

Andrew Roberts, the bank’s research chief for European economics and rates, said that global trade and loans are contracting, a nasty cocktail for corporate balance sheets and equity earnings. This is particularly ominous given that global debt ratios have reached record highs.

“China has set off a major correction and it is going to snowball. Equities and credit have become very dangerous, and we have hardly even begun to retrace the ‘Goldlocks love-in’ of the last two years,” he said.

Mr Roberts expects Wall Street and European stocks to fall by 10pc to 20pc, with even an deeper slide for the FTSE 100 given its high weighting of energy and commodities companies. “London is vulnerable to a negative shock. All these people who are ‘long’ oil and mining companies thinking that the dividends are safe are going to discover that they’re not at all safe,” he said. 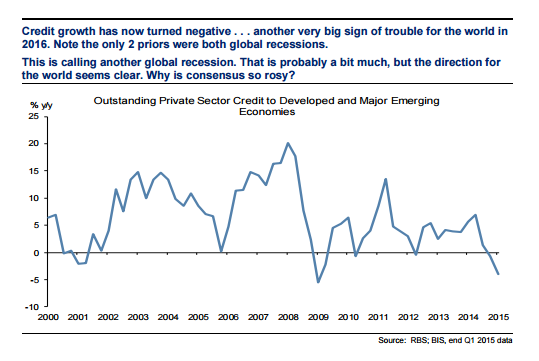 Brent oil prices will continue to slide after breaking through a key technical level at $34.40, RBS claimed, with a “bear flag” and “Fibonacci” signals pointing to a floor of $16, a level last seen after the East Asia crisis in 1999. The bank said a paralysed OPEC seems incapable of responding to a deepening slowdown in Asia, now the swing region for global oil demand.

Morgan Stanley has also slashed its oil forecast, warning that Brent could fall to $20 if the US dollar keeps rising. It argued that oil is intensely leveraged to any move in the dollar and is now playing second fiddle to currency effects.

RBS forecast that yields on 10-year German Bunds would fall time to an all-time low of 0.16pc in a flight to safety, and may break zero as deflationary forces tighten their grip. The European Central Bank’s policy rate will fall to -0.7pc.

US Treasuries will fall to rock-bottom levels in sympathy, hammering hedge funds that have shorted US bonds in a very crowded “reflation trade”.

RBS first issued its grim warnings for the global economy in November but events have moved even faster than feared. It estimates that the US economy slowed to a growth rate of 0.5pc in the fourth quarter, and accuses the US Federal Reserve of “playing with fire” by raising rates into the teeth of the storm. “There has already been severe monetary tightening in the US from the rising dollar,” it said.

It is unusual for the Fed to tighten when the ISM manufacturing index is below the boom-bust line of 50. It is even more surprising to do so after nominal GDP growth has fallen to 3pc and has been trending down since early 2014.

RBS said the epicentre of global stress is China, where debt-driven expansion has reached saturation. The country now faces a surge in capital flight and needs a “dramatically lower” currency. In their view, this next leg of the rolling global drama is likely to play out fast and furiously.

“We are deeply sceptical of the consensus that the authorities can ‘buy time’ by their heavy intervention in cutting reserve ratio requirements (RRR), rate cuts and easing in fiscal policy,” it said.

Mr Roberts said the tightening cycle by the Anglo-Saxon central banks is already over. There will be no rate rises by the Bank of England before the downturn hits, and the next action by the Fed may be a humiliating volte-face and a rate cut.

RBS is not alone in fearing trouble. UBS issued what it called a “significant change” to its house view late last week, saying policy chaos in China had unsettled markets. It cut exposure to equities from overweight to neutral on a “six-month tactical horizon”. It went underweight emerging markets.

UBS said it is a precautionary move, insisting that the current global credit cycle has not yet peaked. Low oil prices should ultimately feed through to higher consumer spending and boost growth.

Larry Summers, the former US Treasury Secretary, said it would be a mistake to dismiss the current financial squall as froth. Markets often sense a gathering storm when policy-makers are still asleep at the wheel. He has long argued that the world economy is so far out of kilter that it takes permanent financial bubbles to keep growth going, an inherently unstable structure.

Yet there is something strange about the latest events. Austerity is finally over in Europe and fiscal policy in the US this year will be expansionary. 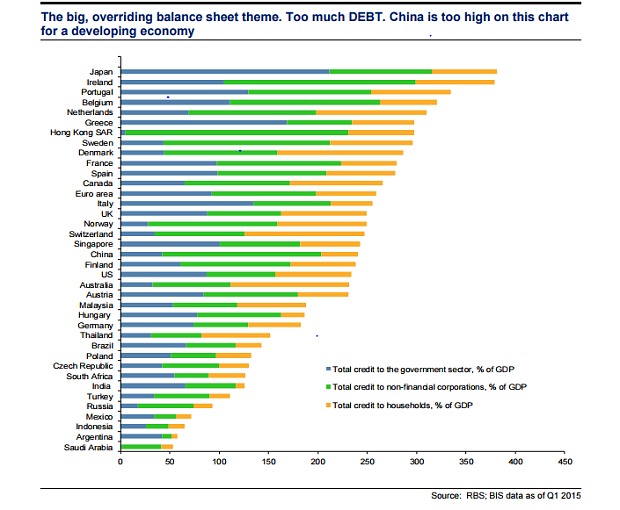 China’s slowdown hit its bottom in June and a fitful recovery has been building, driven by extra budget spending and credit growth. While the composite PMI indicator for manufacturing and services slipped back last month, it is still higher in the summer.

David Owen, from Jefferies, said there is a “weird disconnect” between the economic fundamentals and the market malaise.

“There is no evidence of anything rolling over in the US. Europe is clearly recovering and the M3 money supply in Germany is growing at almost 10pc, which normally means stronger activity,” he said.

Bank of America said panic selling had triggered its “contrarian buy signal”, since 88pc of global equity indexes are now trading below their 200-day and 50-day moving averages. The “Bull & Bear” index is at an ultra-negative level of 1.3. 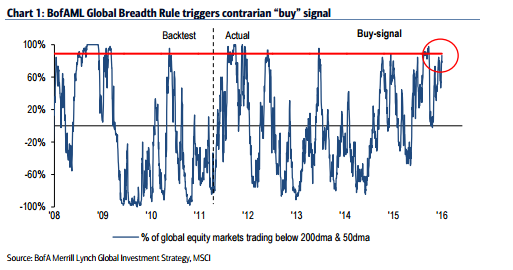 It said a “big tradable multi-week rally awaits” but requires catalysts, above all a stabilisation of the Chinese yuan and oil, better PMI data and a halt to the rising dollar.

The risk is that this market storm drags on long enough to hit investment, regardless of what the economic data should imply. At the end of the day, market psychology can itself become an economic “fundamental”.

Pessimists warn that unless there is a batch of irrefutably good data from China over the next two or three months, the sell-off could become self-fulfilling and quickly metamorphose into the next global crisis.