By Sara Sjolin at MarketWatch

After European Central Bank Mario Draghi on Monday hinted more economic stimulus could be coming in March, expectations have risen that deposit rates will be pushed further into negative territory in a bid to fend off the impact from lower oil prices and world-wide economic jitters.

While rate cuts usually are seen as a way to stimulate economic growth and weaken the currency, analysts at Morgan Stanley on Wednesday raised concerns that exactly the opposite would happen were the ECB to take rates even lower. Part of this is because investors already have rejigged their portfolios to account for the policy, they explained.

“Further moves into negative rates will have much less of an impact on the euro EURUSD, -0.1078% in our view, given that most of the portfolio adjustment is already complete. Rather, we are concerned it erodes bank profitability, creating other systemic risks,” they said in a note.

“Could the most bullish ECB outcome be no rate cut?,” Morgan Stanley analysts asked.

Calling negative interest rates a “dangerous experiment’, the economists argued such policy would erode bank profits 5%-10% and risk curbing lending across eurozone borders. European banks FX7, -2.30% have already been off to a rough start to the year, down 20% on concerns about the fallout from negative rates, lackluster profits, tougher regulation and a slowdown in global growth.

“The credit impulse has turned negative, new loan origination has slowed, and systemic stress in the financial system has risen,” the Morgan Stanley analysts said.

The comments come ahead of the ECB’s March 10 meeting, where investors increasingly are banking on some easing action. The central bank massively disappointed investors in December by introducing a smaller-than-expected rate cut and choosing not to pump more new money into the eurozone economy each month.

But at the January meeting, Draghi opened the door for more easing if the economy and inflation showed no signs of improvement. Fast forward a few weeks, and markets have taken a serious beating as investors started to get really nervous about the impact of persistently low oil prices and a slowdown in the world economy.

This didn’t go unnoticed by the ECB boss. At his quarterly hearing before the European Parliament on Monday he stressed the “ECB is ready to do its part” and would “not hesitate to act” to crisis-proof the eurozone.

Howard Archer, chief U.K. and European economist at IHS Global Insight, said after the hearing he expects the ECB to trim its deposit rate by a further 10 basis points to negative 0.40% at its March meeting and possibly also step up its monthly purchase of assets by as much as 30 billion euros ($33.42 billion) to €90 billion.

However, it appears the ECB is stuck between a rock and a hard place. Bank of America Merrill Lynch strategists pointed out that stimulus measures are losing some of their effect, questioning whether looser monetary policy will help at all.

“Our analysis shows negative interest rates have thus far failed to lift inflation expectations in the eurozone, Switzerland and Japan, while only finding moderate success in Sweden,” they said in a note on Wednesday. The following BAML chart attempts to illustrate the growing ineffectiveness of negative rates: 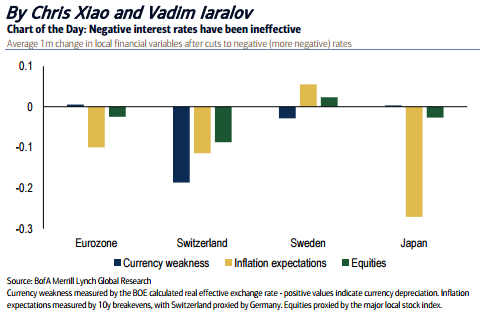 “In our view, the ineffectiveness of [negative interest rate policy] could be due to the market interpreting it as policy exhaustion as markets require ever-increasing accommodation to achieve the same outcome,” they added.

Switzerland, Japan, Denmark and Sweden are among other countries with negative interest rates. Sweden last week cut its main interest rate further below zero in an effort to bring inflation back to its 2%.

But if these measures prove ineffective and the success of central bank stimulus continues to wane, it could have grave consequences for the world economy, the BofA strategists warned.