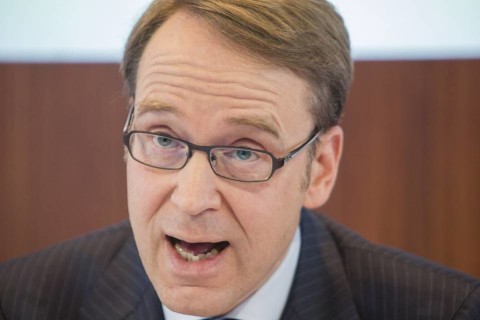 Speaking in the German capital, Mr. Weidmann said a fiscal stimulus program in Germany was unnecessary given the nation’s robust economy, and would have few positive effects for other countries anyway.

Earlier this month, European Central Bank President Mario Draghi joined the chorus of voices that have criticized Germany for reining in its spending at a time of weak economic growth.

“Countries that have fiscal space should use it,” Mr. Draghi said at a news conference. “Germany has fiscal space.”

But Mr. Weidmann argued that Germany’s national debt was already high, and the country’s aging population “calls for lower rather than higher debts.”

Mr. Draghi tempered his remarks on Wednesday after a meeting in Berlin with German lawmakers, who grilled him over the ECB’s easy-money policies and their impact on German savers and banks.

“Germany does have fiscal space [but] we need to be nuanced,” Mr. Draghi said. “I never argued for irresponsible fiscal expansion.”

The ECB has come under increasing pressure in Germany, the largest eurozone economy, since the central bank boosted its €1.7 trillion ($1.91 trillion) stimulus in March. Top German politicians have warned that ECB policies take money from savers and pensioners and fuel populism.

In his speech, Mr. Weidmann defended the ECB’s current policies, arguing that an easy-money stance was “sensible and appropriate…in principle.”

“It would be too narrow an approach to judge [ECB] policy purely from the point of view of savers,” since citizens are also workers, shareholders, taxpayers or property owners, who may benefit from ECB policies, Mr. Weidmann said.

Still, he called for a prompt end to easy-money policies, as soon as inflation picks up, and urged policy makers to wait for the impact of recent measures to play out in the economy before announcing new ones.

The example of Japan, he said, shows how central banks can’t solve an economy’s structural problems through ever greater stimulus.