The new single family home development business constitutes only about 1% of US GDP. But the condition of the business can tell us volumes about the state of the US financial system, economy, markets, and the degree of denial among economic policymakers and media “opinion leaders.”

We started our discussion of the issue in yesterday’s Data Dive. In that post you saw that while the numbers weren’t quite what the mainstream media reported, they were really bad. They are probably foreshadowing the end of the most recent iteration of the US’s serial housing bubbles. In some ways, current conditions are even more dangerous than at the top of the Great Housing Bubble in 2006. Back then nobody in officialdom recognized that there was a serious problem while millions of ordinary people apparently did.

The same is true today. Prices are at all time highs. Housing inflation has far outpaced increases in household income. Affordability is stretched to the limit. Credit standards both in terms of the buyer and the value of the collateral have deteriorated, and now mortgage rates heading higher have suddenly choked off sales growth.

December sales of 38,000 units were 4,000 less than in November, a drop of 9.5%.  You would think that that’s not a big deal because intuitively we’d think that sales are always down in November. However, the facts say otherwise.

Since new home sales bottomed after the crash in 2010, December sales only fell one other time, in 2013.  Not surprisingly, mortgage rates had risen sharply that year also.  However, rates then began falling again. We may not be so lucky with rates this time. If rates keep rising from here, the uptrend in sales will roll over. 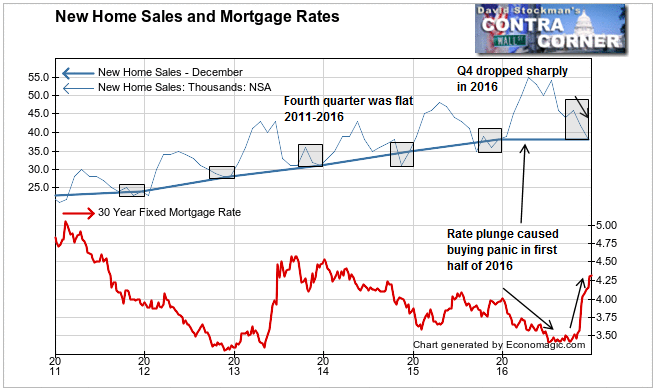 On a year to year basis sales were flat. That followed double digit yearly growth rates from March to November.  In December, the 30 year mortgage went from 3.4% to 4.2%. Sales slammed on the brakes.

We also saw zero year to year growth back in January and February 2016 when mortgage rates were around 3.75. But then mortgage rates plunged to near the 2012 all time low. That triggered a buying panic in the first half of last year.  New home sales soared.

The bloom is now off the rose as mortgage rates have surged. Sales have plunged since September. For 5 years from 2011 through 2015 sales had held their own from September to December.  Not so in 2016.  2016’s September to December performance was the worst since 2009 when the new home sales market was still crashing.

As always, we like to do give some perspective to show just how bad  this “recovery” has been. 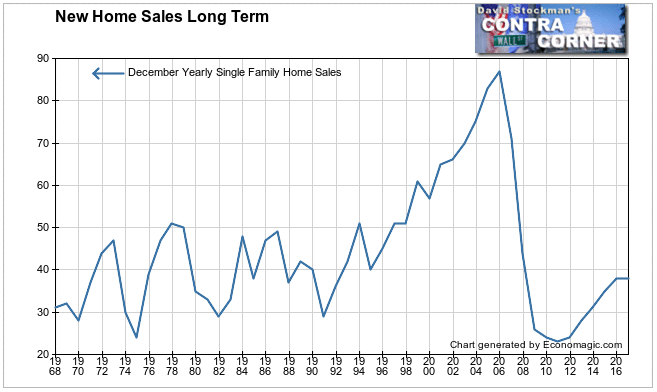 Total sales today are no more than they were in 1992, while total population has grown by 75%. 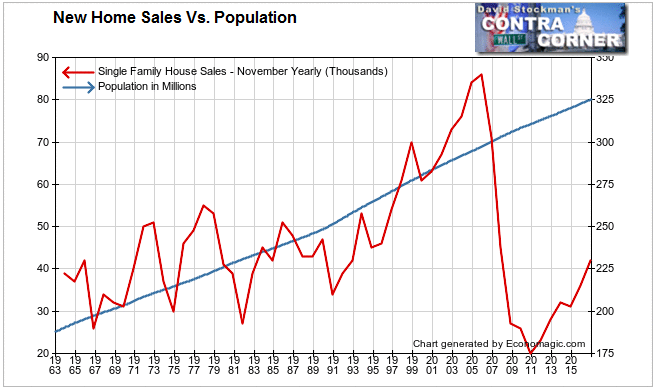 The percentage of new home sales relative to population is still near all time lows. Another way to view this is to look at the sales rate as opposed to total sales. In this case we can look at monthly average sales per million persons of population. This normalizes the data for population growth. The data again goes back to 1964. 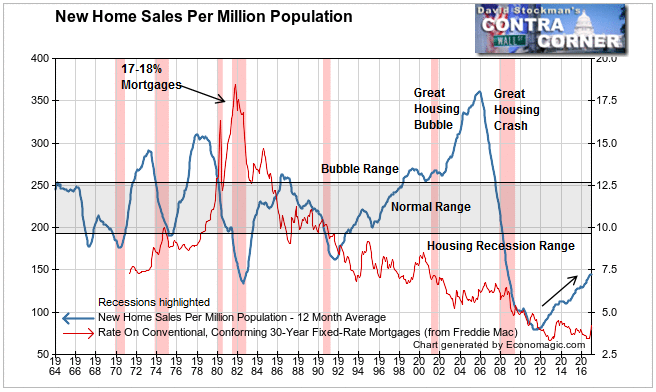 In spite of the lowest mortgage rates in history, the recovery from the Great Housing Crash has only brought the sales rate back to an average of 150 sales per million per million persons per month. That’s barely above the worst rate of the 1982 recession. Those of us who were around back then remember that era well. Paul Volcker’s super tight monetary policy drove mortgage rates to the 17-18% range for most of 1981-82. The market choked on those rates.

How different things are today. Mortgage rates hit all time lows in 2009. The Fed pushed rates even lower from there. That rate suppression to constant new lows persisted for 7 years.

In spite of that stimulus, the sales rate failed to come close to historical norms of between roughly 200 to 250 sales per month. In addition the slope of the recovery is the worst in the 52 year history of this data.

Consider that sales are still below 1991 levels. That was in the immediate aftermath and at the lows of the S&L crisis. In Florida, where I lived, the market completely froze. Prices fell by about 30% from 1989 to 1991.   It was the bottom of all bottoms we thought a few years later after prices had recovered. That laid the groundwork for the Great Housing Bubble. It led to the peak of sales volume in late 2005 at 360 per million people.

The housing industry is in much deeper trouble than anyone thinks. That is in terms of not only the industry itself, but more importantly in terms its contribution to the US economy and its impact on the financial system. Housing equity can disappear in a flash. When it does, the financial system begins to implode.

It’s also symptomatic of just how badly the bulk of American households are doing. The Fed has provided a record interest rate subsidy for the purchase of a home. But fewer people that at any time in 50 years, except for when rates were at 17-18%, can afford a home.  There is no cushion if mortgage rates rise. There’s no reservoir of pent up demand

That  fragility of the housing industry isn’t yet widely recognized. That bodes ill for the US financial system and markets.  There are opportunities on the short side in housing stocks and ETFs, and ultimately for the market as a whole.

In a subsequent report we’ll look at what prices are doing and what it means for the financial system and markets.