Newsflash To Fed: Retirement Is Impossible With Negative Rates

By John Mauldin at Forbes

Since 2008, the Fed has relied on near-zero interest rates to stimulate economic growth, and they still sincerely believe that low interest rates will do the job they’re supposed to.

However, the hard evidence of the past few years is that ultra-low rates, combined with quantitative easing, haven’t stimulated much growth.

Unemployment has fallen, which is good—but probably not as good as the numbers suggest because people have gone back to work for lower pay and are now even deeper in debt.

Personal income growth has stagnated, too.

ZIRP Was a Failure

Are we better off now than we were five years ago?

The answer is a qualified yes. But it is not entirely clear, at least to your humble analyst, that the halting economic recovery is the result of low interest rates and not other less manipulable factors such as entrepreneurial initiative and good old muddling through.

In fact, an ultra-easy monetary policy may be part of the reason we’ve been stuck with low growth. Witness Japan and Europe. Just saying…

Seriously, no one fully understands how all the moving parts influence each other. Years of ZIRP did help businesses and consumers reduce their debt burdens. ZIRP and multiple rounds of QE have also done wonders for stock prices… but not much for the kind of business expansion that creates jobs and GDP growth.

If year upon year of ultra-low rates were enough to create an economic boom, Japan would be the world’s strongest economy right now. It obviously isn’t—which says something about ZIRP’s efficacy as a stimulus tool.

What isn’t a mystery, however, is that ZIRP has created a massive problem for retirement savers and pension fund managers.

Negative Rates Will Be Worse

If ZIRP is bad, NIRP will be far worse for retirement planning. Bond-return assumptions will have to be even lower and potentially below zero. This situation would wreak havoc on every pension fund—but that’s not even the worst part.

Most asset allocations are generally in the ballpark of 60% equities and 40% bonds, so that is the standard portfolio we will be discussing. Other allocations will make some differences, but not change the general direction. In other words, “your mileage may vary,” but probably not by much.

In an ideal world—which is the world that pension consultants live in—equities will return 10% nominal and bonds will return 5%. A 60/40 portfolio blend will then yield an 8% overall return after fees, expenses, and management costs.

It doesn’t require a great deal of head scratching to realize that a negative interest rate environment is going to bring overall bond yields down below 2%.

That paltry yield will drop the blended portfolio rate to 1.2%. How long can that low return last? Ask Japan. When we saw the advent of zero interest rates in the US seven years ago, no one thought they would be in place this long. No one.

The reality is that in our mega-debt world, long-term interest rates are going to be low for quite some time.

Let’s Do the Math

I’m going to start with a modest number, but you can add zeros to your heart’s content. Let’s say you save $1,000 a year for the next 30 years. Your pension consultant tells you that you can make 8%. And if you actually do, you find you have paid in $30,000, but your account has grown to $123,345.87, or over four times your contributions. Not a bad day at the office.

Do you want to bet your future that interest rates are going to be that much higher in 20 years? Maybe you need to save more.

Let’s turn to a little graph that my associate Patrick Watson whipped up for me in Excel. The top, gray line represents the 8% scenario; the middle, orange line is the 6% scenario; and the lower, blue line is the more pessimistic (but maybe realistic) 4% return. 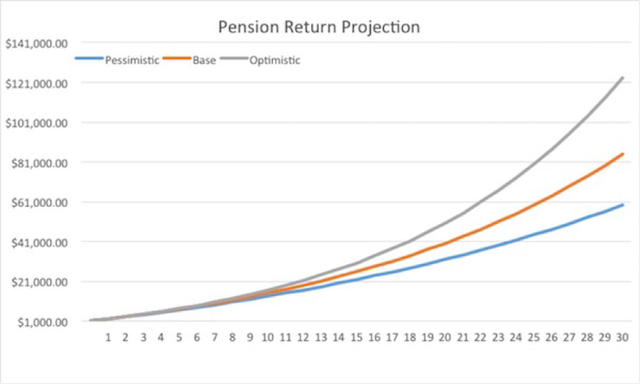 But these numbers assume you don’t have to deal with that pesky inflation thing. A mere 2% inflation will guarantee that your money will be cut by about half after 30 years. (So even that $5,000 a month if you really make 8% won’t turn out to be that much of a lifestyle. And God forbid you make only 4%.)

Subscribe to Mauldin Economics’ free newsletters, which will help you understand what’s happening in the world’s economy so you can make informed investment choices based on current, clear, and valuable observations.