No Bubble In San Francisco——–This Shack Worth Every Penny Of $1.2 Million

By DANIEL GOLDSTEIN at Marketwatch 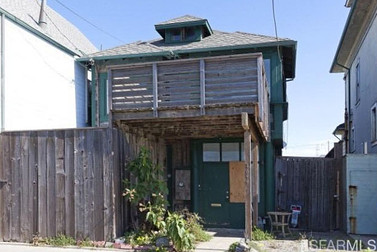 Click here to see more images of the home.

The tale of this otherwise humble two-story home selling for more than $1.2 million has gone viral and has much of the real estate chattering class talking.

“This is not a joke, this is the world we live in,” wrote SFist’s Jay Barmann, calling the 1907 four-bedroom two-bath Craftsman home “ramshackle.” A “total disaster,” wrote Tracy Elsen, a real estate blogger in San Francisco.

Indeed, it might not look like much from the outside or inside, but where it is at, 1644 Great Highway, San Francisco, Calif. 94122, is where it is at.

The 1,832 square-foot house, listed on Redfin.com as a “contractors special” in a “deteriorative state” that “needs everything” just sold March 24 for a whopping $1.21 million in cash, (or $660 a square foot) after being listed in February for $799,000 (a premium of $411,000). At that per-square foot price, it was more expensive than the going rate in Boston, Washington and New York.

The home, even though it has been gutted, has what every potential home buyer in San Francisco (let alone much of the Western world) wants, an unobstructed view of the Pacific Ocean and a short walk across San Francisco’s Great Highway to the beach, and it is just five blocks from San Francisco’s famed Golden Gate Park. Oh, and it is got off-street parking, not a small thing in the City by the Bay given the explosive rate of real-estate development elsewhere.

Since then, the house has taken a pounding. Many of the Craftsman-era fixtures common to Bay Area homes at the time, including stained glass and Tiffany-style lamps, have been ripped out, as well as most of the fixtures and carpeting, and evidently, an outdoor hot-tub that was listed in 2008, but not mentioned in the 2015 listing. A second story deck in the front of the house with a view of the Pacific Ocean remains, but is badly weathered, along with the now faded forest green paint, compared with the careful upkeep evident in 2008.

But much of what made this home a gem in 2008 remains, including picture windows, a decked garden, fireplaces with wood mantles, built-in cabinets common to Craftsman era homes, wainscoting, and a gas O’Keefe & Merritt stove that dates back to the late 1940s and early 1950s and which are collector’s items and highly-prized by homeowners in the Bay Area.

And given the fact that San Francisco’s median home price recently hit $1 million, and that it rose 10% between February 2014 and February 2015 and is expected to gain another 4.3% through February 2016, the price for this house might just be a bargain.