If you did not have insurance before Obamacare, but do now, or if you are heavily subsidized, you may consider Obamacare a blessing.

If you are not in those select groups, then you are highly likely to be paying more for insurance now than before. And it’s going to get worse. 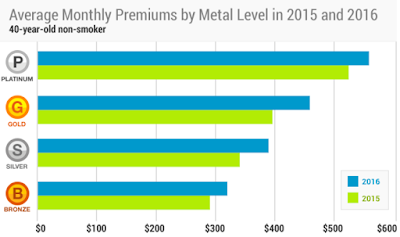 Obamacare plans are classified into four metal levels depending on the percentage of costs that they typically pay for covered healthcare services. A bronze plan pays 60% of covered costs for a standard population, a silver plan 70%, a gold plan 80%, and a platinum plan 90%. Obamacare plans also have four provider network types: Health maintenance organizations (HMOs), Exclusive Provider Organizations (EPOs), Point of Service (POS) plans, and Preferred Provider Organizations (PPOs). PPOs and POS plans cover out-of-network care2, while HMOs and EPOs do not. EPO and PPO plans do not require referrals from primary care doctors to see specialists, but HMO and POS plans require referrals.

[Mish Comment: You can save a lot of money on a bronze plan, but you better not get major sick or in a major accident]

When insurance companies proposed premium rates for the first year of the Affordable Care Act, 2014, they had guessed what services would be used and how frequently the use would occur because the Affordable Care Act had opened the door in the privately purchased health insurance market to people who had been previously rejected from coverage due to costly pre-existing conditions. The Affordable Care Act’s prohibition on denying coverage based on health considerations meant that the composition of the enrollee pools would change from what they were during the pre-reform period. Less healthy enrollees who used more care would become a larger portion of the enrollee pools.

2016 health insurance rates, in contrast, are based on a full year’s healthcare usage data from 2014 as well as partial data from 2015. Accordingly, the public will receive a better representation of the costs of Affordable Care Act coverage in the 2016 rates by virtue of their reliance on more complete data.

[Mish Comment: As any one with any bit of common sense expected, more people need more services so rates are going up rapidly].

On average the proposed premiums for 2016 Obamacare plans were 12% higher than the 2015 premiums. Silver and gold plans had the greatest average rate increases of 14% and 16% respectively, while bronze rates increased 9% and platinum rates increased 6%.

Bronze plans were the second most popular metal plan in 2015, making up 22% of marketplace plan selections.

Silver plans were the most popular metal plan during the 2015 open enrollment period, accounting for 67% of marketplace plan selections. Silver EPOs had the greatest percentage increase (20%) in premium rates from 2015 to 2016 among the types of silver plans, followed closely by HMO plans at 19%. Premiums for silver POS plans were up 15%, while silver PPO premiums were 11% higher.

Only 7% of marketplace plan selections during the 2015 open enrollment period were gold plans. 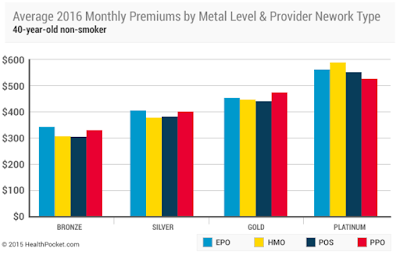 Bronze plans constitute another 22% of all plans. Those in Bronze plans other than PPOs will see rates go up 15% to 20%.

Bronze PPO plans go up the least, only 4%, but PPO premiums started higher than the others.

Plan B? States Have None

Later this month the Supreme Court will rule on King v. Burwell. The issue is whether tax credit subsidies purchased through federal government healthcare exchanges are legal.

The SCOTUS Blog assessed the odds in plain English on March 4, in Will concern for states’ rights win out in subsidies battle? The key point involving a death spiral.

What may eventually prove to be the key line of questioning may have been kicked off by Justice Sonia Sotomayor, who expressed concern about the consequences of a ruling for the challengers.  If a state’s residents don’t receive subsidies, she told Carvin, it will lead to a “death spiral”: because a large group of people in those states will no longer be required to buy health insurance, but insurers will still be required to offer insurance to everyone, only sick people will buy health insurance. And that will cause everyone’s insurance costs to rise, leading more people to drop out of the insurance market. States will then feel like they have no choice other than to establish their own exchanges to ward off the “death spiral” – a scenario that is so coercive that it violates the Constitution.

Perhaps critically for the government, Justice Anthony Kennedy – who is often regarded as a strong supporter of states’ rights – also expressed concern about the possibly coercive effect of a ruling for Carvin’s clients. There is, he told Carvin, “something very powerful to the point” that if the challengers prevail, the states have to choose between the death spiral and creating an exchange. “There’s a serious constitutional problem,” he concluded. (Carvin tried to downplay this concern by telling Kennedy that the government had not raised this issue, but Kennedy quickly retorted that “we sometimes think of things the government doesn’t argue.”)

The blog points points out there are six solid votes for the government: Justices Elena Kagan, Sonia Sotomayor, Stephen Breyer, and Ruth Bader Ginsburg. They need one more vote.

The above death spiral scenario seems to make it likely, yet the blog concludes it is by no means a given.

Between the near-complete radio silence from the Chief Justice and the sometimes conflicting questions from Justice Kennedy, the case is a tough call. Overall, the government can probably be cautiously optimistic (but only cautiously), because on net Kennedy’s concerns about the potentially coercive effect of the challengers’ rule seemed to outweigh his qualms about the government’s reading of the statute. And even if Kennedy does not swing his support to the government in the end, the Chief Justice might remain in play, as he was during the 2012 battle over the individual mandate. But we probably won’t know until the Court issues its decision later this year; when it does, we’ll be back to explain it all in Plain English.

No Plan B – 6 Million at Risk on Subsidies

The Washington Post reports States have ‘No B plan’ if Supreme Court Scraps Health-Care Subsidies.

Any day now, the Supreme Court will announce its decision in King v. Burwell, the latest high-stakes fight over the Affordable Care Act. If the government loses, more than 6 million residents of the 34 states that declined to establish their own health-care exchanges could lose subsidies that help them purchase insurance.

In principle, those 34 states could restore subsidies by creating their own insurance exchanges. Political leaders will certainly come under intense pressure to do so, although time is short to get an exchange up and running for 2016.

To investigate these questions, we undertook, with financial support from the Commonwealth Fund, a study of five states that could lose tax credits: Florida, Michigan, New Hampshire, North Carolina and Utah.

What we found was both striking and worrisome. Dozens of interviews conducted by our research team with political leaders, agency officials and advocacy organizations in those states indicate that the states are almost completely underprepared for the Supreme Court’s decision in King. As North Carolina Gov. Pat McCrory (R) said in March, “There’s no B plan.”

Policymakers also expressed frustration with the Obama administration’s silence about its plans. Most states expect the administration to make it easier for them to transition to state exchanges. But they are reluctant to make concrete plans when they don’t know what the federal government expects of them.

In the states that have failed to lay the groundwork, it will probably be impossible to set up an exchange in time for 2016.

Compounding the timing challenge, only one legislature of the five states we studied (Michigan), and eight of the 34 affected nationally, will be in session after the court’s ruling. Although a special session appears likely in Utah, creating an exchange may not be on the agenda. It’s far from clear that special sessions will be called elsewhere.

But the bottom line is grim. The states aren’t prepared for King, and any debates over whether to create state exchanges will be turbulent and difficult. In the meantime, millions of people stand to lose their health insurance.

I suspect Obamacare proponents will scrape up a vote, but if not, states will act to avoid the alleged “death spiral”.

We find out soon.