By Art Berman at Forbes

Oil prices should fall, possibly hard, in coming weeks. That is because fundamentals do not support the present price.

Prices should fall to around $30 once the empty nature of an OPEC-plus-Russia production freeze is understood. A return to the grim reality of over-supply and the weakness of the world economy could push prices well into the $20s.

A Production Freeze Will Not Reduce The Supply Surplus

An OPEC-plus-Russia production cut would be a great step toward re-establishing oil-market balance. I believe that will happen later in 2016 but is not on the table today.

In late February, Saudi oil minister Ali Al-Naimi stated categorically, “There is no sense in wasting our time in seeking production cuts. That will not happen.”

Instead, Russia and Saudi Arabia have apparently agreed to a production freeze. This is meaningless theater but it helped lift oil prices 37% from just more than $26 in mid-February to almost $36 per barrel last week. That is a lot of added revenue for Saudi Arabia and Russia but it will do nothing to balance the over-supplied world oil market.

The problem is that neither Saudi Arabia nor Russia has greatly increased production since the oil-price collapse began in 2014 (Figure 1). A freeze by those countries, therefore, will only ensure that the supply surplus will not get worse because of them. It is, moreover, doubtful that Saudi Arabia or Russia have the spare capacity to increase production much beyond present levels making the proposal of a freeze cynical rather than helpful. 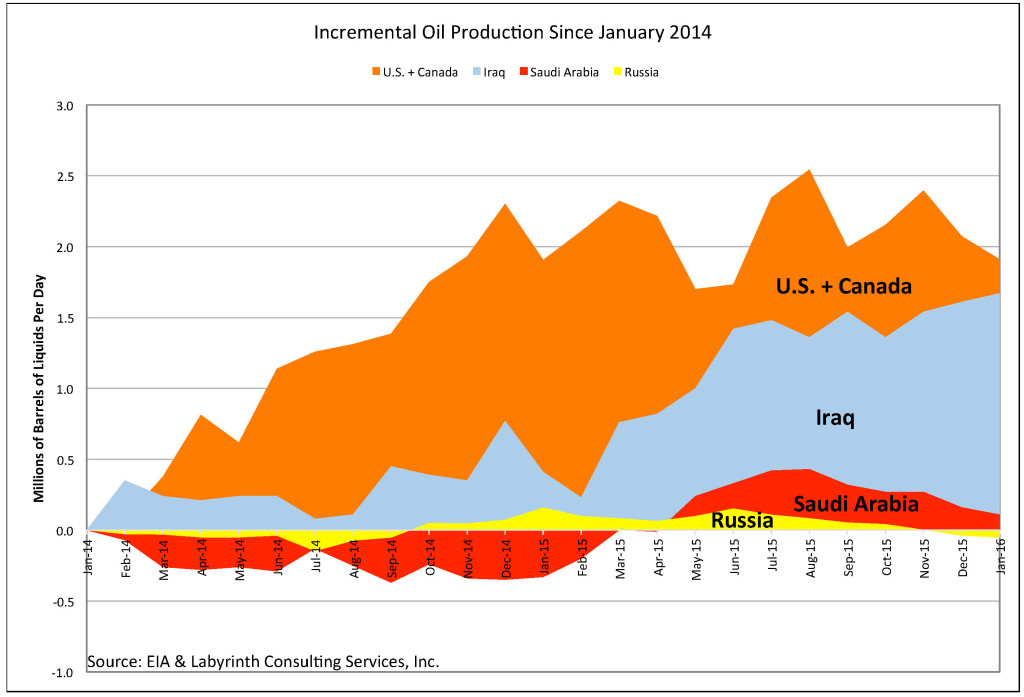 By contrast, the U.S. plus Canada are producing ~1.9 mmbpd more than in January 2014 and Iraq’s crude oil production has increased~1.7 mmbpd. Also, Iran has potential to increase its production by as much as ~1 mmbpd during 2016. Yet, none of these countries have agreed to the production freeze. Iran, in fact, called the idea “ridiculous.” 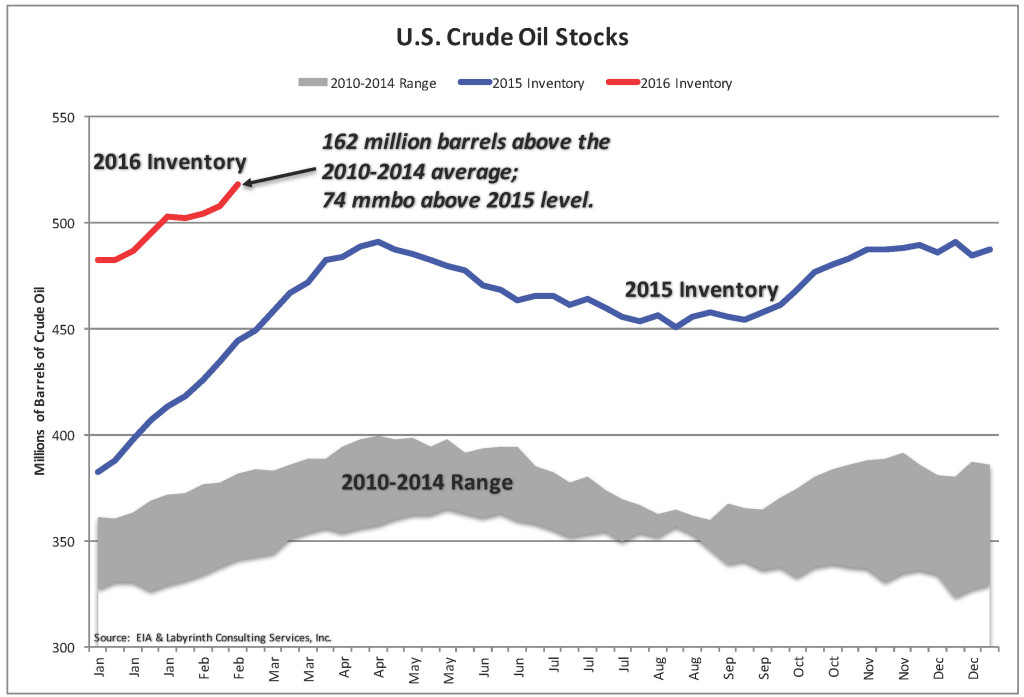 The correlation between U.S. crude oil stocks and world oil prices is strong. Tank farms at Cushing, Oklahoma (PADD 2) and storage facilities in the Gulf Coast region (PADD 3) account for almost 70% of total U.S. storage and are critical in WTI price formation. When storage exceeds about 80% of capacity, oil prices generally fall hard. Current Cushing storage is at 91% of capacity, the Gulf Coast is at 87% and combined, they are at a whopping 88% of capacity (Figure 3). 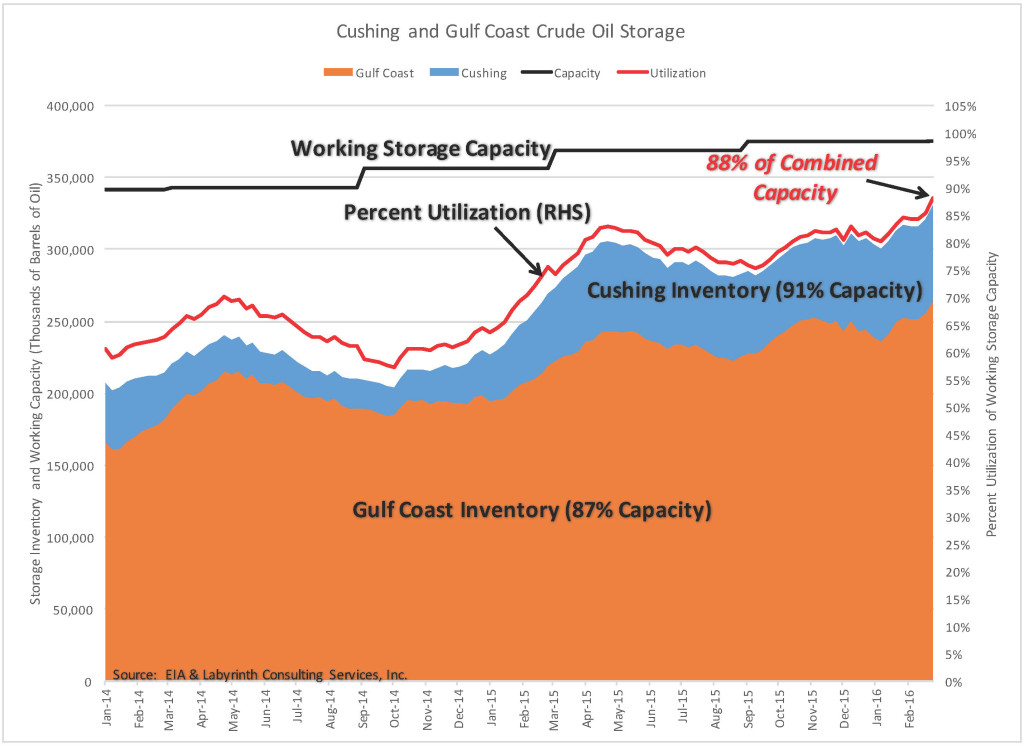 Prices have fallen hard in step with growing storage throughout 2015 and early 2016. Since talk of a production freeze first surfaced, however, intoxicated investors have ignored storage builds and traders are testing new thresholds before they fall again.

The truth is that prices will not increase sustainably until storage volumes fall, and that cannot happen until U.S. production declines by about 1 mmbpd.

That is an improvement over the average 60,000 bpd monthly decline since the April 2015 peak.  It is not enough, however, to make a difference in storage and storage controls price.

EIA and IEA will publish updates this week on the world oil market balance and I doubt that the news will be very good. IEA indicated last month that the world over-supply had increased almost 750,000 bpd in the 4th quarter of 2015 compared with the previous quarter. EIA data corroborated those findings and showed that the surplus in January 2016 had increased 650,000 bpd from December 2015.

Oil Prices and The Value of the Dollar

Why, then, have oil prices increased? Partly, it is because of hope for an OPEC production freeze and that sentiment is expressed in the OVX crude oil-price volatility index (Figure 5). 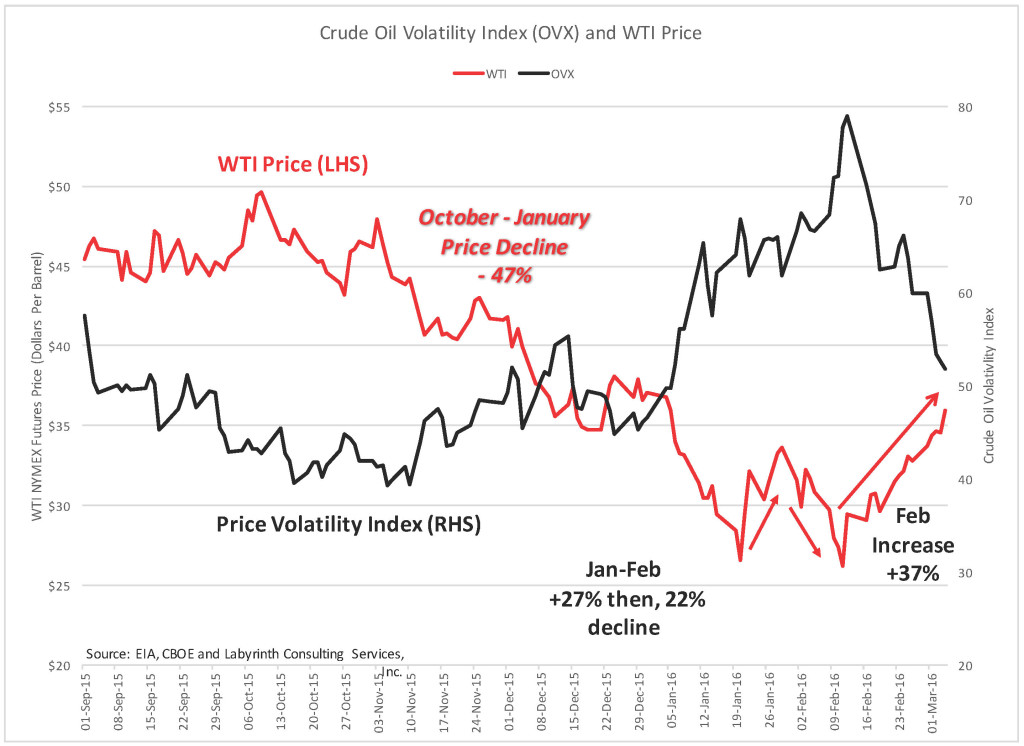 The OVX reflects how investors feel about where oil prices are going. It is sometimes called the “fear index.” That suggests that investors are feeling pretty good and less fearful about the oil markets than in the last quarter of 2015 when oil prices fell 47%. Since mid-February, prices have increased 37%.

But there is more to it than just hope and that may be found in the strength of the U.S. dollar. The negative correlation between the value of the dollar and world oil prices is well-established. The oil-price increase in February was accompanied by a decrease in the trade-weighted value of the dollar (Figure 6). 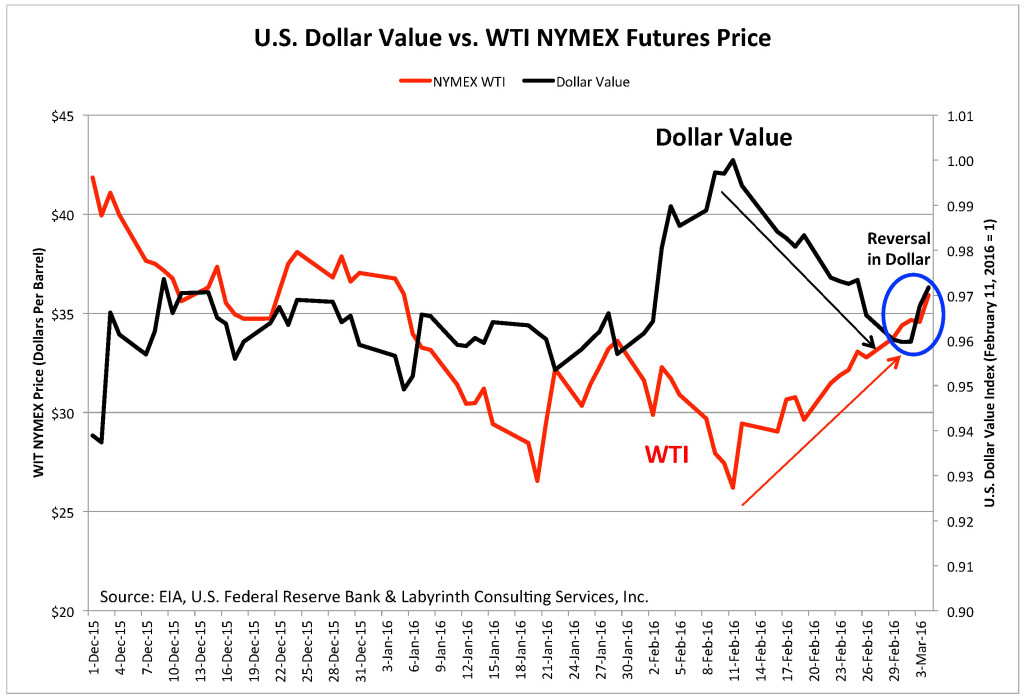 Now, that trend has reversed. The U.S. jobs report last week was positive so continued strength of the dollar is reasonable for awhile. Assuming the usual correlation, that means that oil prices should fall.

It is a sign of how bad things have gotten in oil markets that we feel optimistic about $35 oil prices. It should also be a warning that the over-supply that got us here has not gone away.

Oil storage volumes continue to grow and that is the surest indication that production has not declined enough yet to make a difference. It is impossible to imagine oil prices rising much beyond present levels until storage starts to fall. In fact, it is difficult to understand $35 per barrel prices based on any measure of oil-market fundamentals.

The OPEC-plus-Russia production freeze is a cynical joke designed to increase their short-term revenues without doing anything about production levels. An output cut would make a difference but a freeze on current Saudi and Russian production levels means nothing.  It apparently made some investors feel better but it didn’t do anything for me. Iran got this one right by calling it ridiculous.

No terrible economic news has surfaced in recent weeks but that does not change the profound weakness of a global economy that is burdened with debt and weak demand. The announcement last week by the People’s Bank of China that it sees room for more quantitative easing may have comforted stock markets but it only added to my anxiety about reduced oil consumption and future downward shocks in oil prices.

I hope that oil prices increase but cannot find any substantive reason why they should do anything but fall. As market balance reality re-emerges in investor consciousness and the false euphoria of a production freeze recedes, prices should correct to around $30. A little bad economic or political news could send prices much lower.